Uhuru: Learn From Kibaki On Teachers 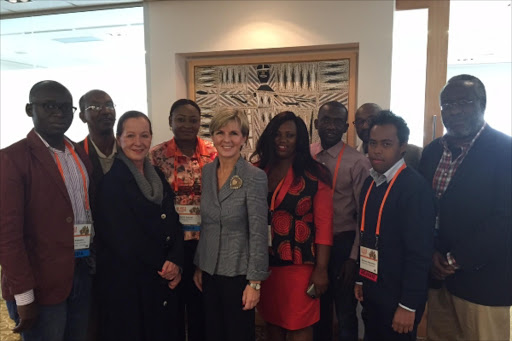 The highlight of my recent visit to Australia was not the whale-watching cruise during which I got to see the migrating giant humpback whales. (I gather Australians regard this amazing spectacle as their equivalent of the annual Kenya-Tanzania wildebeest migration.)

Rather the highlight was a media conference at which both Australian and visiting journalists got to put their questions to the Australian Foreign minister, and deputy leader of the Liberal Party, Julie Bishop.

Now I believe most Kenyans would agree with me that our President, Uhuru Kenyatta, is pretty impressive at press conferences. Whatever blunders he or his Cabinet Secretaries may make elsewhere, when Uhuru stands in front of the massed cameras, he comes across as a decent man, very reasonable, very fair, and above all, extremely charming and funny.

Bishop not only has Uhuru’s easy charisma, but she also has something else which – among our own leading politicians – I have not seen at all in recent decades. I have to go all the way back to some old grainy videos of the independence-era political titan Tom Mboya for a local example of what I saw the Australian Foreign minister so effortlessly demonstrate: an encyclopaedic grasp of world affairs and the bewildering ambiguities thereof.

This quality mattered because, once the press conference started, to the great astonishment of the African journalists present, their Australian counterparts did not raise their hands and wait to be allowed to ask a question. Rather they immediately embarked on rapidly firing off questions at Bishop. Even odder, very few of these questions were about the African-Australian mining investment conference, which was what we were all there for.

They asked about the Syrian refugee crisis; a local parliamentary by-election coming up; Australian development aid policy; a reported air strike in Iraq involving the Australian Defence Force; and just about anything and everything but what we visitors considered to be the subject at hand. A couple of us did manage to ask questions specific to the mining sector. But mostly, the media conference ended up focused on all those other issues the Australian journalists were determined to raise with their Foreign minister.

And Bishop answered all their questions concisely, with the greatest self-assurance imaginable, tossing out all kinds of statistics to support her statements. All in all, it was an unforgettable demonstration of Bishop’s dazzling mastery of her ministerial portfolio.

But now I come to the really crucial thing in all this. Such mastery is but one aspect of political leadership. Whether in Kenya or in Australia, what is even more important in a leader, is the capacity to confront and resolve the most difficult national challenges of the day.

At the moment, our President faces the daunting challenge of the teachers’ strike. No amount of fine speeches can resolve this. Difficult decisions have to be made.

And when it comes to such difficult decisions, Uhuru need look no further than to his predecessor, the retired President Mwai Kibaki, to know what he must do.

The Kibaki presidency was not marked by any memorable media events at all. But it was remarkable for the President’s willingness to make tough decisions. For example, when Kibaki proclaimed the free primary education programme in early 2003, about 1.5 million children who had been out of school for years because their parents could not afford to pay school fees, walked straight into the nearest classroom.

But we have also since learned that the Finance minister of that time, David Mwiraria, then went to see Kibaki to explain that the national budget simply could not accommodate the substantial cost of educating these additional 1.5 million children from poor families, who had now entered the public school system.

To this Kibaki reportedly answered: “You are my Finance minister: Go and find the money needed to keep those children in school.”

And, of course, that is what Uhuru should now be saying to his Finance CS, Henry Rotich. Instead of offering us all those invalid excuses, he should simply say to Rotich: “You are my Finance secretary: Go and find the money needed to pay the teachers what the courts have ordered.”

Post a comment
WATCH: The latest videos from the Star
by WYCLIFFE MUGA
Columnists
17 September 2015 - 06:00
Read The E-Paper