What Obama Didn't have Courage To Say 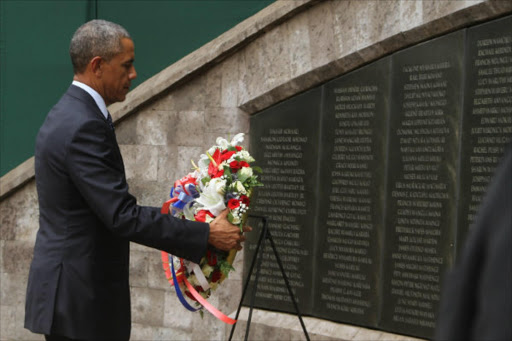 The much-awaited visit of US President Barack Obama to Kenya is done and dusted. By nearly all accounts, it was a massive success, showcasing the country as an investment destination and providing Kenyans an opportunity to claim the Kenyan-American leader of the free world as one of their own. However, in the fading afterglow of the trip, we can now begin to evaluate the events of the weekend. Perhaps a good place to start is with his previous visit here.

A leaked confidential US diplomatic cable reporting on a meeting between then opposition leader, Uhuru Kenyatta and the then junior Senator from Illinois during the latter’s 2006 tour of Kenya contains this interesting exchange:

“Senator Obama commented that when he returns to Kenya in 10, or five years, he hopes he will not hear the same comments about Kanu and its failure to reform. Kenyatta then challenged the Senator to publicly identify him as dishonest if he failed to remain on the reform track, stating that it is Kenya's true friends who will tell them when they are naked.”

Nine years later, Obama did return as President of the United States and again met with Uhuru, now President of Kenya. Did Obama take up the challenge? Did he show himself to be one of “Kenya's true friends who will tell them when they are naked”?

Well, the verdict would appear to be mixed at best. Certainly, he spoke eloquently about the need to confront corruption but with nowhere near the forcefulness of his 2006 speech, when he averred that “the message that many Kenyans seemed to be sending was one of dissatisfaction with the pace of reform, and real frustration with continued tolerance of corruption at high levels”.

This time round, while acknowledging that the government needed to enforce anti-corruption laws and prosecute offenders, he chided opposition politicians for demanding that he put pressure on the Uhuru administration over, according to them, the corruption, insecurity and repressive laws restricting the media and civil society. "Everybody wants the United States to be involved when they're not in power but when they are in power, they don't want the USA to be involved," Obama told representatives of civil society, adding he had made it clear to the opposition chiefs that there is a legitimate government in Kenya, which the US would work with.

(Interestingly, according to another leaked US diplomatic cable, Uhuru, whose administration has spent much of its first two years in office vilifying the West for its supposed impositions, had in 2006 made the same request, even going so far as to suggest that the Americans could use donor-funded programmes as an effective pressure point.)

In his speech to Kenyans, Obama also declared that corruption was tolerated because it had become a way of life, a habit and culture that needed to change. This contrasts with his stance in 2006 when he painted corruption as a problem of governance and praised those who “reject the insulting idea that corruption is somehow a part of Kenyan culture”.

Earlier, during a joint press conference with Uhuru, Obama had noted that the corruption culture can change “over time” when “people of integrity at the highest levels” are willing to punish, not just petty corruption but also hold the elite to account. "Breaking habits and saying no comes from the top," he noted. However, while praising his counterpart’s “announced commitment to rooting out corruption”, Obama did not mention that the fight against sleaze was already coming off the rails just four months after being trumpeted. Nor that many in the country were sceptical about the government’s commitment to prosecuting its own. Talk, it seems, is now progress enough.

This is again a marked change from 2006 when Obama demanded that wealth declarations by public officials be accessible to the public (hasn’t happened), called for accountable, transparent government and an anti-corruption commission with real authority.

By attributing corruption to the people and ignoring the meagre anti-corruption achievements, Obama appeared determined to spare his hosts shame, perhaps mindful of the reaction his 2006 speech had elicited from the Mwai Kibaki administration, which described him as an unintelligent and immature opposition puppet.

The reluctance to directly criticise the Uhuru government was most obvious when he addressed the issues of terrorism and the illegal wildlife trade. On the former, he praised the “extensive and effective counter-terrorism cooperation” and offered “practical advice” on avoiding stigmatisation of communities and restrictions on legitimate civil society organisations.

However, he chose not to highlight the fact that the Kenyan government had done little to convince ordinary Kenyans that it was taking the security problem seriously or learning lessons from the many attacks the country has suffered.

Similarly, even as he announced new restrictions on ivory in the US in a bid to help stem the slaughter of the country’s elephants, he failed to take to task the Kenyan government for protecting the poachers.

Throughout the visit, Obama seemed determined to paint a picture of progress amid continuing challenges, to re-cast Kenya as “a good news story” with Uhuru at the helm “taking important steps in the right direction”. Nothing wrong with that, I suppose. But disappointing for those who had hoped Obama’s tour would include a candid examination of whether his hosts had stayed true to the reform agenda. In the end, for all his flowery talk, Obama could not find the courage to tell the emperor that he has no clothes.

Post a comment
WATCH: The latest videos from the Star
by PATRICK GATHARA
Columnists
31 July 2015 - 06:00
Read The E-Paper