The posters of Azimio candidates Raila Odinga and Martha Karua are everywhere.

•KBC, K24 and KTN follow dutifully behind. The media is officially in the tank for RAO.

•Surprised? Only The Star has fought and struggled to walk the middle ground, but it also appears to be fluttering against a strong wind. 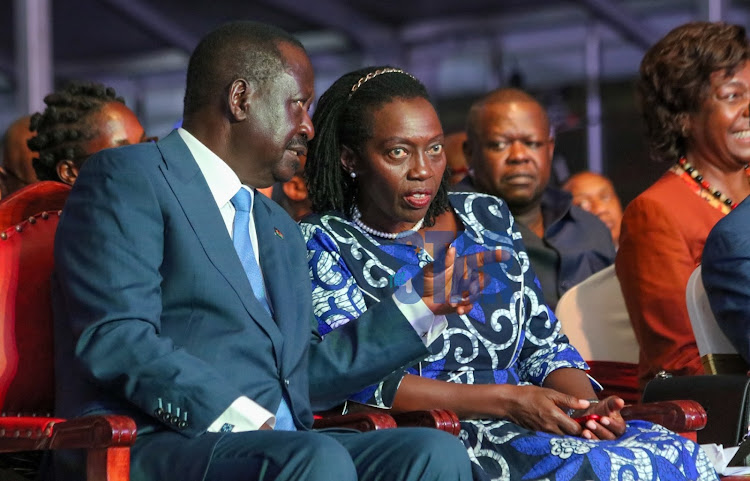 Everywhere you turn, in the newspapers, social media, billboards and posters, the sky seems to have turned blue.

The posters of Azimio candidates Raila Odinga and Martha Karua are everywhere.

You turn on the radio, and news about their latest rally is incomplete without a sound bite.

The media that is supposed to be neutral in elections has unwittingly become star-struck and has now taken sides.

Today, the Daily Nation led with a banner headline: President Raila? It is now or never. Citizen Radio and TV begins its news bulletins with Azimio rallies and devotes a sizable chunk to Martha Karua as well.

KBC, K24 and KTN follow dutifully behind. The media is officially in the tank for RAO.

Surprised? Only The Star has fought and struggled to walk the middle ground, but it also appears to be fluttering against a strong wind.

Not surprisingly, a report by the Media Council of Kenya released in June revealed gaps in election-related news coverage and showed disparities in campaign coverage on the two top contenders in the race.

The report stated that the Azimio la Umoja presidential candidate Raila topped overall on publicity with 58.7 per cent of media mentions against Ruto’s 36.6 per cent.

Maybe the media have seen something we have missed. Still, the public is entitled to fair and balanced coverage so that they can make an informed decision on who to back for President.

The outgoing President Uhuru Kenyatta is shouting from every rooftop he can find, extolling the virtues of Azimio and especially RAO.

I am astounded but not swayed. But I am mostly really disappointed that the majority of media has jumped on the Azimio bandwagon.

There will be a price to pay when elections are over. President Kenyatta’s project may have cracked the airwaves and now conducts the media to dance to his tune, but on a professional level, they are doing this nation a great disservice.

RAO has become an oversold product that has filled the airwaves, the supermarket shelves, the market stalls and even the administration offices.

But it will remain just that. Besides the overkill that pervades everywhere you turn; from the roadside posters to the billboards- and every time you turn on the television set, the Azimio project is rapidly becoming an object of utter disdain and revulsion.

Why? When you oversell a commodity, the consumers reach the level of resentment and objection to it.

The Nation headline is the icing on the cake of this project: Bondo readies for Raila presidency. It almost feels like there is no hope or even tomorrow if RAO does not win on August 9th.

But the voters are smarter and more informed about the shifting ground and what they want.

The huge chorus of approval is amplified by the questionable and incredulous opinion polls that are doing rounds and whose results and analysis are questionable.

The huge chorus that is being played out before our very eyes is the complete opposite of Alan Ayckborn, a 1984 play A Chorus of Disapproval that to me comes to mind.

The play is set in 1985 and follows an almost “life to stage story” of a young widower, Guy Jones, who loves theatre and decides to join an amateur operatic society to fulfil his dream.

The theatre group is putting on a musical titled The Beggar's Opera. In order to accomplish his wish, he quickly goes up the ranks of the acting troupe, rising through the ranks from a tiny role to become the lead male actor while simultaneously and admirably conducting liaisons with several of the female cast members in order to win favor with them.

Our media fits aptly into this role by trying to please so many political actors during silly season and hoping that the person they have put their money on will win.

It will be interesting to analyze some of these opinion polls with the actual voting.

But the whole brouhaha is being orchestrated by varied state agencies that forget that the voters’ minds are made up based on policies and what the candidates have pledged to do for them, not how many times you yell loudly into their ears to vote a certain way.

The strategy to demonize William Ruto as a thief or untrustworthy sounds like a tactic taken out of the Lee Atwater playbook.

Harvey LeRoy "Lee" Atwater was an American political strategist for the Republican Party and adviser to both President Ronald Reagan and George H. Bush who stoked controversy through aggressive campaign tactics that created tensions, including what he called “the Southern strategy."

In American politics, the Southern strategy was a Republican Party election blueprint to increase their political capital among white voters in the South by employing rhetoric that appealed to racism against African-Americans.

Republican leaders consciously used this strategy to appeal to white Southerners' racial grievances (many of whom previously supported the Democratic Party) in order to gain their votes following the civil rights era.

The southern strategy is virtually similar to the “Ruto ni mwizi” strategy to paint him as dishonest and not trustworthy.

There is almost a certain level of frantic desperation among the Azimio brigade with the vitriol that has been poured on this poor hapless fella in the last two weeks. Land grabber, thief, angry and hot-tempered… The list is endless.

Attacking his policies or his manifesto has been abandoned. It seems attacking his persona will bring effective results and derail or slow down his momentum.

In so many ways, voters and the public – if I may predict by looking into my crystal ball – will be totally astonished when the results begin to trickle in on the morning of August 10.

The role of media in Kenyan elections: What you should know

Media can inform perceptions of what’s at stake in elections.
News
1 week ago

Candidates depend on the much-needed clout to bolster their chances of winning.
Opinion
1 week ago
WATCH: The latest videos from the Star
by BRIAN MUSUMBA
Opinion
03 August 2022 - 13:06