Presidential Debate: Did smoothing of Karua’s edges dampen her performance?

Similarly, they were able to articulate their party or coalition issues fairly well.

•Few would disagree with the claim that neither Gachagua nor Karua committed any debilitating faux pas.

•How about persuading the undecided voters? I would think this was where the debate could have been won or lost. 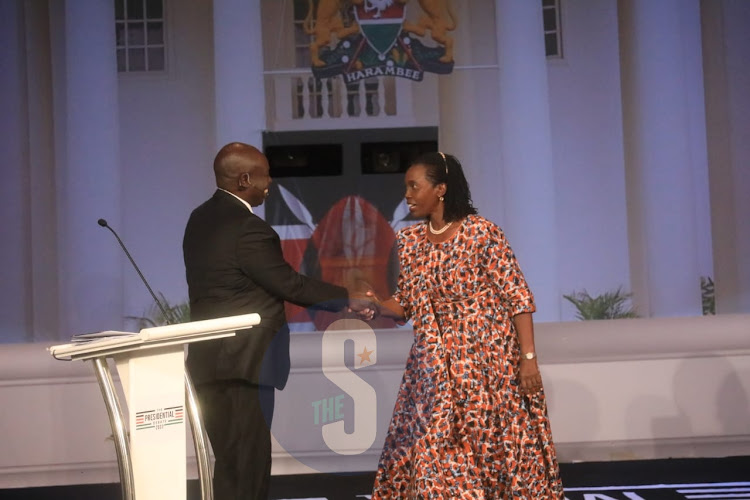 As expected opinion about the performance of the two leading deputy presidential candidates, Rigathi Gachagua (Kenya Kwanza) and Martha Karua (Azimio) in the presidential debates Tuesday night was a mixed bag.

Those of the Kenya Kwanza coalition persuasion came away convinced that their man acquitted himself well by not committing any obvious gaffes, even if, at some point, he said that he doesn’t know the price of a liter of kerosene because he doesn’t go to supermarkets.

There might have been some genuine concern that Gachagua, coming in as the underdog, could have shot himself on the foot by putting his foot in the mouth. He did not.

Azimio supporters, on the other hand, felt that contrary to expectations, Karua was not overly aggressive and did, through restraint and measured articulation of issues, show the temperament and comportment required for the high office of the deputy president.

But did the smoothing of her perceived rough edges dampen her performance on the stage? Did she, in an attempt to portray herself as the potential obedient number two, fail to display the feisty side of her that some would have wanted to see?

One would imagine that the strategists for the rival camps were out to achieve three key things; avoid any self-inflicted blunders that could sow doubts among loyal supporters, entrench already defined positions and, perhaps most importantly, swing for the undecided voters.

Few would disagree with the claim that neither Gachagua nor Karua committed any debilitating faux pas.

Similarly, they were able to articulate their party or coalition issues fairly well.

How about persuading the undecided voters? I would think this was where the debate could have been won or lost.

I would argue that contrary to the expectations of many, this debate should not have been about the issues contained in the manifestos of the rival camps.

Those have robustly been canvassed at various fora and, if anything, there is still the presidential debate itself that is a better place to do this.

The running mates debates would have been successful, in my estimation, if they revealed two key things: First, what kind of deputy president were these running mates likely to be? Second, what kind of personal and unique contribution were they bringing to their respective presidential tickets?

To the first question, the moderators posed: given the fallout between President Uhuru Kenyatta and his deputy William Ruto, how were the running mates going to handle any potential differences?

Gachagua’s response was clearly evasive, even dodgy. He claimed that the reason there was a fallout between Kenyatta and Ruto was because of a perceived“inferiority complex” on the president’s side.

That the president couldn’t stand a strong-willed deputy and that he (Gachagua) doesn’t envisage such a situation arising should they win the election.

To extrapolate that logic, what Gachagua was saying was that if he conducts himself towards Ruto the way Ruto conducted himself towards Kenyatta- by Ruto insisting that he made Kenyatta president and that he had an equal share of the government- then president Ruto would absolutely have no problem. As they say in Kenyan streets, atajua hajui!

Karua on the flipside acknowledged that indeed there could be differences that people “will not always see things the same way”.

Her solution? Fix those issues in the boardroom and never wash your dirty linen in public. More realistic, honest even.

To the second question, Karua sought to portray herself as an advocate for social justice, a defender of the poor and an anti-graft crusader who will work towards dismantling the graft cartels through the criminal justice system and get public money to be used for the right purposes.

As for Gachagua, he tried to paint himself the picture of a man of the people, someone with his finger on the pulse of the state of the affairs of the common man or woman- the hustlers.

His use of mwakenya (prepared notes) to rattle off fertilizer prices as well as argue his point about “state capture” must have resonated in some quarters as he came across as well prepared with “facts” and “in touch” with the reality on the ground.

On this one, Karua was mostly right but Gachagua said some right things.

The writer is a journalist and communications [email protected]

I don’t take alcohol; I wake up early ready to serve Kenyans - Gachagua

Gachagua said he has the zeal to serve the people of Kenya.
News
3 weeks ago

Gachagua in a quick rejoinder said Karua quit when Raila was making life impossible for her.
News
3 weeks ago

Gachagua arrived shortly past 7 pm followed by Karua a short while later.
InPictures
3 weeks ago

Gachagua: I am worth Sh800 million

The Mathira MP insisted that he is not a billionaire, as is publicly claimed.
News
3 weeks ago

Ruto and I won't ever disagree after elections - Gachagua

“Both Ruto and I are strong-willed leaders who respect each other."
News
3 weeks ago
WATCH: The latest videos from the Star
by PETER OPONDO
Opinion
20 July 2022 - 12:20