MAKODINGO: Women in the Judiciary boost war on graft

Kenya has witnessed a rise in the appointment of women to important positions of leadership.

•Even today, women are still discriminated against with some practices like female genital mutilation still taking place without much say from them.

•In recent years, however, Kenya has witnessed a rise in the appointment of women to important positions of leadership in both the public and private sectors. 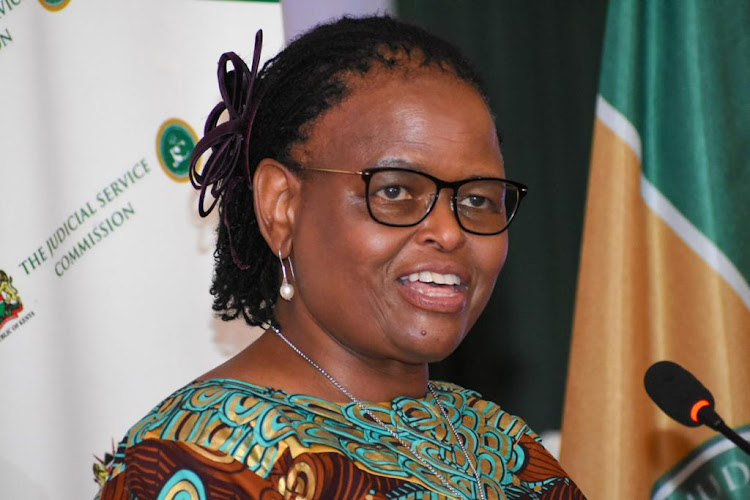 In the words of former US President Barack Obama: "Any nation that fails to educate its girls or employ its women and allow them to maximise their potential is doomed to fall behind the global economy. We’re in a sports centre: imagine if you have a team and don’t let half of the team play. That’s stupid. That makes no sense".

For a very long time, women had little to no say in what happened both to them and around them, not just in Kenya but the world over.

Even today, women are still discriminated against with some practices like female genital mutilation still taking place without much say from them.

In recent years, however, Kenya has witnessed a rise in the appointment of women to important positions of leadership in both the public and private sectors.

Nowhere is this leadership more pronounced than in the Judiciary where lady justices and magistrates have demonstrated a metal that many of their male colleagues have shown reluctance to do.

And whereas other arms of Government have struggled with gender parity, the Judiciary is at the forefront in meeting the two-thirds gender rule in all its cadres, with the Supreme Court, where three out of the seven Judges (including the entire leadership) are lady justices.

In the war on graft, some of the most impactful judgements have been delivered by women led by Lady Justice Mumbi Ngugi setting jurisprudential precedence with her now-famous ruling that public officers charged with corruption (including Governors) must not access their offices until their cases are heard and determined.

With over one hundred lady Justices and Magistrates, Kenya is on a promising path to gender parity in its Judiciary. Could these developments in the anti-corruption sector be a game-changer?

It is evident that corruption affects vulnerable and poor populations more than any other group.

According to a report published by the United Nations Office on Drugs and Crime titled “Corruption and Gender: Women and men are affected differently by corruption, but there is no evidence women or men are less corruptible”.

Women and children are often the hardest-hit segments of the population, especially in key sectors like the provision of health services where their lives are often on the line when poor or lack of services lead to maternal deaths and higher infant mortalities.

The wide representation of women in leadership positions in Kenya’s judicial system is therefore imperative for fighting corruption.

As the Chief Justice and President of the Supreme Court, Lady Justice Martha Koome is enforcing a zero-tolerance policy toward corruption in the judiciary.

One of her very first moves after taking over was to carry out an audit of the judiciary in collaboration with the Ethics and Anti-Corruption Commission (EACC), to reveal possible corruption loopholes and recommend ways of sealing them.

This is evidence of her zeal for achieving a fair judicial system that does not condone corruption.

In her regime, prosecution of cases involving corruption and embezzlement of public funds is to be completed within sixty days.

She noted that such cases were dragged for over three years and has now made changes to fast track them.

Her momentum in creating change within the judicial system is satisfactory given that she is not even a year old as the CJ; more judges have been appointed to the court of appeal during her tenure.

The CJ came at a time when the inadequate judges at the court of appeal were hampering the hearing of cases.

While presiding over the admission of 355 advocates to the bar, the CJ publicly warned new advocates to desist from corruption and maintain their integrity and high professional standards.

The fight against corruption cannot be won as an individual race, hence the Chief Justice has not walked this journey alone. Women judges have delivered epic judgements which have been lauded as great for deterring corruption.

Significant among these are two judgements, one delivered by Anti-Corruption Court Chief Magistrate Elizabeth Juma, in June 2020, against Sirisia Member of Parliament (MP) John Waluke and his co-accused Grace Wakhungu and a company.

The trio were sentenced to pay a cumulative fine of Sh2.1 billion- or 67-years jail term for Waluke and 69 years for Wakhungu. The conviction was for the Sh314 Million maize scam following a tender by the National Cereals and Produce Board.

Lady Justice Mumbi Ngugi, one of the celebrated judges also delivered an impactful judgement in July 2019.

The ruling sent shivers down the spines of top government officials.

This judgment would later be featured in a research thesis by J.V. Owiti captured as, “A tale of Judicial Courage: Lady Justice Mumbi Ngugi’s Bravery that Gave Back Some Life to the Dying Edicts of Chapter 6 of the Constitution”.

This ruling upheld the letter and spirit of the Constitution as envisaged in Chapter 6 on Leadership and Integrity.

Through this ruling, Justice Mumbi drew out the sword of justice and ensured by a single blow, public officials facing corruption stayed out of the office until their cases were determined.

Justice Mumbi also won an award in February 2021- the CIHR Global Jurist of the Year Award from the Northwestern Pritzker School of Law’s Centre for International Human Rights (CIHR).

The newly enhanced participation of women in the fight against corruption is critical.

The achievements of women in the judicial arm of the government are numerous and cannot be captured in one story.

What, however, stands out is their renewed zeal and relentless fight to rid Kenya of corruption, backing the directive by President Uhuru Kenyatta for the government to lead the war against graft.

Say she has opened doors for more women into leadership.
News
1 month ago

Women mediators called for these special groups to be included as well
News
1 month ago
WATCH: The latest videos from the Star
by MAKODINGO WASHINGTON
Opinion
18 May 2022 - 21:47