Kenyans should elect leaders with integrity

Our hotly contested elections are often marred by incidents of violence, voter intimidation.

• Most of the electorate’s engagement in politics is driven by the hope that their chosen leader will favor his or her ethnic community once he or she gets to office.

• This, they believe, will be in the form of jobs, tenders, access to public services and other economic opportunities 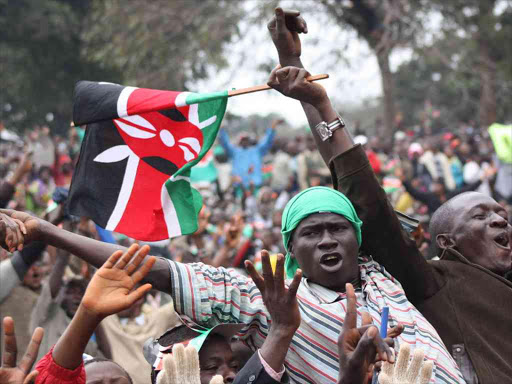 Kenyans in jubilation at Uhuru Park during the Promulgation of the 2010 Constitution
Image: JACK OWUOR

In the run-up to the enactment of a new Constitution in 2010, one of the most contentious issues was Chapter Six of the Constitution on Leadership and Integrity.

It also captures one of the reasons Kenyans wanted to do away with the old constitution – unfettered power and the abuse of public office for personal gain that came with it.

According to The Constitution of Kenya review Commission Report (the primary source document for the Constitution of Kenya, 2010), the People of Kenya, in recommending the formation of an anticipated Ethics and Integrity Commission (now EACC), said they wanted the Commission to, among others: “investigate whether persons who have availed themselves for appointment as public officers or who avail themselves or are prepared to stand for public elections for offices are free of corruption and therefore fit and proper persons for those offices and disqualify on investigation as in the paragraph above those who are found not suitable for public office in terms of the Code or in terms of the law.”

The intention of the people was therefore clear – to ensure that only “fit and proper” persons are given an opportunity to avail themselves for elective office.

And whereas Chapter Six was quite clear on the threshold for qualification for public office, political horse-trading almost made it impossible to hold elected leaders to this standard as Article 99(3) on the Legislature made it impossible to bar a candidate with questionable integrity from contesting for office.

It further made it almost impossible to hold to account elected leaders who faul afoul of the law, including those convicted of serious offences!

This provision states that no one can be disqualified from running for office “unless all possibility of appeal or review of the relevant sentence or decision has been exhausted.”

However, despite these legal and institutional underpinnings, we have still gotten many things wrong. Our hotly contested elections are often marred by incidents of violence, voter intimidation and heightened incidents of voter bribery.

This situation is exacerbated by the fact that many politicians and their supporters view politics as a source of wealth and power, as opposed to an opportunity to serve the public.

In fact, most of the electorate’s engagement in politics is driven by the hope that their chosen leader will favor his or her ethnic community once he or she gets to office.

This, they believe, will be in the form of jobs, tenders, access to public services and other economic opportunities

It is on this basis that corruption continues to flourish before, during and after elections and yet, the main beneficiaries of the stolen public money are often the leaders’ families, cronies and close friends – and seldom the members of the populace.

Once again, as millions of Kenyans troop to their polling stations on 9th August, 2022 to elect the leaders that they will entrust with the management of the country for the next five years, this conversation must once again be brought to the fore.

We should in the very least ensure that the persons we elect as President (and Deputy President), Members of Parliament, Governors and Members of the 47 County Assemblies are persons of impeccable character and integrity in accordance with the dictates of by Chapter Six of the Constitution of Kenya.

In fact, more than five (5) Governors (in Migori, Busia Samburu, Tharaka Nithi and Garissa) are facing corruptions related charges, as are two former Governors (for Nairobi and Kiambu Counties) who have since been removed from office for abuse of office.

In addition, there are more than fifteen (15) Members of Parliament who are facing corruption charges in court, and are still keen on defending their seats in 2022.

A recent report by Transparency International-Kenya surveyed citizen’s perceptions and understanding of ethical leadership, premised on the assumption that citizens know and are capable of identifying the right individuals to occupy public offices.

On the issue of leadership and corruption, more than 75% of respondents believe that a person convicted, accused or under investigation for corruption should not be allowed to contest for an elective position.

When asked about the three most important qualities that a good leader should possess, majority of the interviewed affirmed a strong vision/manifesto, integrity and law-abiding characters as the top qualities they look for when voting for a leader.

The report then indicates that despite these ideals, apathy to governance issues, weak institutions and loopholes in the legal and political frameworks create an enabling environment for the perpetuation of unethical leadership in Kenya.

For example, provisions such as those related to the rights of accused persons to bail, to fair trials and fair administrative actions, have ensured that those accused of corruption have time and opportunity to defeat the course of justice.

The existing avenues of appeal have also been abused to prolong cases where the accused persons cannot be held accountable until all appeals have been exhausted.

Accordingly, a proposed Bill by Ugunja MP Opiyo Wandayi, which is now before the Justice and Legal Affairs Committee, proposes to lock out persons with integrity issues or those facing corruption charges from vying for any elective positions.

The bill proposes to amend the Leadership and Integrity and Elections Acts and to empower the EACC and IEBC to lock out any person who has been charged with corruption from vying.

If passed and sufficiently implemented, the bill could provide a good starting point to addressing the social, legal and institutional catalysts for unethical leadership.

In the meanwhile however, citizens must commit to their ideals of good leadership to compliment the law and elect leaders who adhere to the tenets of integrity and ethical leadership.