One must recognise that class divisions are worse than tribalism.

• I am afraid that the hustler narrative may be a recipe for another economic meltdown before we recover from the Covid-19 pandemic.

• The divide between the rich and poor would easily water down economic gains achieved by Kenyans. 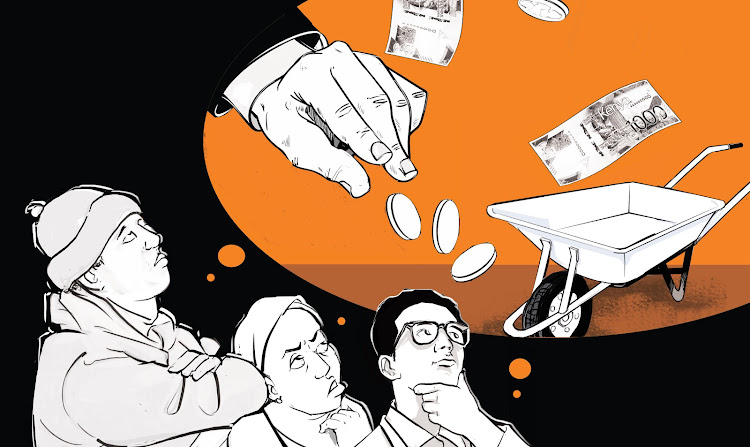 Language is dynamic and ordinary words as they are known today may change their meaning. For instance, we may remember how Gidi Gidi and Maji Maji popular song dubbed "Unbwogable” found its way into the political discourse under Narc.

Unbwogable as a word became synonymous with unstoppable or unshakable and true to its new meaning, Narc went ahead to win the 2002 General Election.

The "Hustler" narrative has evolved into a political mantra associated with Deputy President William Ruto. I will skip the debate on whether DP Ruto is a hustler or former hustler and delve into the possible net effect of the Hustler narrative in case it ends up being misunderstood by its adherents.

A conversation with two of my economist friends appeared to accord with my view that the much-publicised "bottom-up approach" weaved under the "hustler" banner can be a recipe for economic and political chaos, if the promoters do not take adequate time to explain to Kenyans, majority who are the real hustlers.

How will the bottom-up approach fit into the current economic policies for a capitalist country like ours? Put differently, how will the hustler government prioritise mwananchi? Will it be through handouts that we commonly witness, grants or tenders? History records that at independence, Kenya's economy rivalled that of Singapore and other Asian tigers but since ours took the corruption pathway, recovering has been slow and difficult.   It is for this reason that popular views often serve to blindfold ordinary voters to vote with emotions as opposed to an honest assessment of their leaders.

I am afraid that the hustler narrative may be a recipe for another economic meltdown before we recover from the Covid-19 pandemic. There is no doubt that Kenya has had the Haves and Have Nots divide since independence. Unfortunately, this divide has been growing on account of economic missteps by successive governments, with Jubilee sinking Kenya into more debts and heavy taxes.

The late JM Kariuki aptly captured Kenyans' real problem when he bashed the corrupt regime of founding President Jomo Kenyatta by declaring that "Kenya had become a country of 10 millionaires and 10 million poor people”.

JM would be surprised if he were to come back and see more than 30 million Kenyans under poverty. Ordinary Kenyans are hardworking and some people have worked hard to transit to the middle class strata. The middle class needs to be assured that their hard-earned wealth will not go up in flames under the guise of hustlers vs the rich because being wealthy is relative.

The objective of Kenya's s Vision 2030 is to transform Kenya into a middle-income and industrialised nation. To add to that, investors would always seek to be assured of a better investment environment.

A country's economic models are usually developed based on its actual needs and historical governance. This is the reason why Tanzania abandoned ujamaa after establishing it was not making Tanzanian competitive among communities of nations. Tom Mboya's sessional paper No.10 laid down Kenya's economic blueprint that proposed economic development in areas with the highest potential. This was later abandoned in favour of equal national development.

One must recognise that class divisions are worse than tribalism.

The divide between the rich and poor would easily water down economic gains achieved by Kenyans. The middle class and ordinary Kenyans meet and shop in the markets and in ordinary supermarkets. There are chances that the commoner may look at those within the bracket of the middle class as being unfairly advantaged.

I am not suggesting that the hustler narrative is bad but we must have an honest conversation to avoid being misinterpreted or misused. In the absence of a proper understanding of the narrative, it can be a recipe for chaos and lead to negative economic impact.

A close look at South Africa's history should warn us about the dangers associated with class divisions along economic lines. The xenophobic attacks in South Africa largely mirror class divisions. What will be the net effect of the hustler narrative as our modern-day economic model on our GDP, if investor confidence declines on account of a hostile business environment?

Look here dear Kenyans, there are no investors who will commit their investments without an assurance they will be secure. This is why I suggest we must have an honest conversation around Kenya's economic models that can guarantee equal opportunity for all without fuelling class divisions.

The promoters of the hustler narrative have not told us how they will meet the expectations of mama mboga, boda bodas and jua kali artisans, among others. What if ordinary Kenyans expect to be given handouts because of the culture of tokenism from the political class? I will not be surprised hat people might expect that the government will be taking cash and literally dishing it out to them.