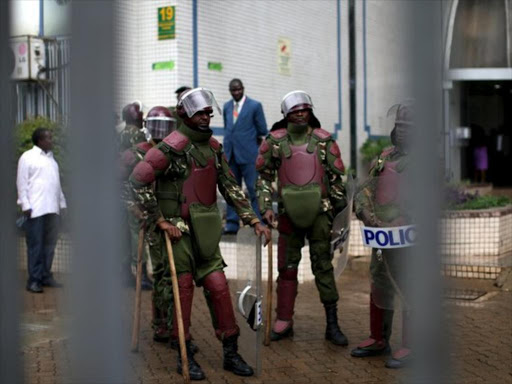 Kenyan anti riot police guard the premises of the country's electoral commission after a crowd consisting of opposition leaders and their supporters tried to enter the building to demand the disbandment of the electoral body ahead of next year's election in Nairobi, Kenya, April 25, 2016. Photo/REUTERS

Free, fair and regular elections are the enduring foundations of every democratic state, not just as episodic events, but as an integral part and societal infrastructure of civilised nations.

Africa is now replete with nation states that hold regular elections but many are yet to achieve the distinction of being democratic states where human rights, the rule of law and good governance are respected. Where liberty reigns not in doses but as a way of life.

Everything must be done in every nation, including Kenya, to ensure that citizens have the freedom to exercise their political rights based on universal suffrage and in an election that makes every citizen and every vote count.

The jury is not out anymore. It is now an uncontroverted fact that Jubilee did not win the presidential elections in 2013 but were declared victorious through a conspiracy hatched by IEBC, elements in the Supreme Court and the security agencies.

The misuse and abuse of technologies, the illegal recognition of a multiplicity registers of voters and the bias of the IEBC (sanctioned by the Supreme Court) was the path followed to handover power to the current administration.

The police and NIS played the role of a rogue cop and a robot soldier controlled by the security barons and operatives in the office of the President and the military.

IEBC is now irredeemably tainted with scandals (cChickenGate and all). The Supreme Court is collapsing under the weight of corruption allegations.

And the police with its infamy of lack of independence has no place in the present constitutional arrangement. Cord therefore declares that there is no proper electoral infrastructure for holding a free and fair elections in 2017.

The referendum and Okoa Kenya Bill proposed amendments to the Constitution to address the legal and institutional reforms that would be necessary to resolve controversy in the electoral law, the independence and impartiality of the police, the judiciary and IEBC.

Those who are howling at us for not using legal and constitutional means to remove the IEBC forget that CORD was using the mechanism provided by Article 257 of the Constitution of Kenya.

By a stroke of the pen IEBC frustrated a valid constitutional process by falsely claiming that Cord did not attain the threshold of one million signatures of registered voters.

We know that Jubilee has been living in mortal fear of a referendum. The administration has used the threat of prosecution of the Chairman of IEBC and his colleagues to secure decisions to be made in their favour by IEBC.

In Iceland a Prime Minister has resigned recently from office not through a vote of no confidence but by hearing the voice of the people when his name appeared in the Panama Papers.

Public outrage was enough to trigger his removal from office. And Jubilee cannot lecture us on legality and validity of process. Mumo Matemu and other Commissioners of EACC were simply hounded out of office through intimidation, harassment and arm-twisting.

The whole of last year we urged the government to embrace dialogue as an appropriate and peaceful way of dealing with all issues of national concern that included insecurity; more revenue to counties; questions around ethnicity and nepotism; land; and elections. All was turned down with arrogance and chest thumping.

Yesterday a lawful attempt by Cord to have a peaceful engagement with IEBC on the basis of Articles 37 and 38 of the Constitution was violently brought down through police brutality.

Many of our people were hurt. Jubilee has brought back the imperial presidency and state terror as a means of control and running an autocratic administration. We are not impressed. We condemn the state for going back to the dark days of one party state, social injustice and political oppression. We shall not allow it.

The meeting will be replicated in all major towns and centres in the country to tell the IEBC, time is up, time to go.

All meetings outside Nairobi will be held at the IEBC offices with emphasis on Nairobi, Mombasa, Garissa, Machakos, Nakuru, Eldoret, Kakamega, Kisii, Busia, Bungoma, Narok, Lodwar, Meru, Isiolo, Nyeri and Kitale. Kenya cannot and will not conduct any other general election under the IEBC as presently constituted.