All you need to know about independent commissions, offices 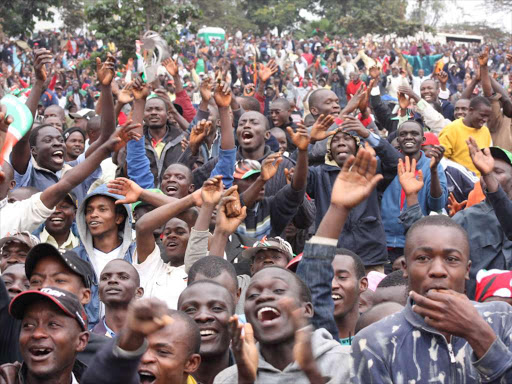 EXCITED: The crowd that turned up at Uhuru Park in Nairobi to witness the promulgation of the new constitution in 2010.

This article focuses on why we have independent commissions and offices established by the constitution, and what their functions and structures are. In the following weeks their performance will be examined against their mandates. Their independence is ensured by constitutional provisions that they are subject only to the constitution and the law, and are not to be directed or controlled by any person or authority (including the president). Parliament has to “allocate adequate funds to enable them to discharge their functions”.

Their major responsibilities are to protect the sovereignty of the people; to ensure that all state organs observe democratic values and principles; and to promote constitutionalism, (this includes all constitutional values and principles). A key objective of these Katiba Corner articles is to investigate whether they have achieved these objectives or have instead been co-opted by state institutions, descending to the latters’ levels of inefficiency, greed and irresponsibility.

There are 14 commissions and two independent offices; covering human rights; land; elections; salaries in the public sphere; appointments and disciplinary action for the police, public service, judiciary, parliament, and teachers; and allocation of revenue (for counties). The independent offices are the Auditor-General and Controller of the Budget. Then there is the anti-corruption commission: the constitution did not create it, but required Parliament to pass a law setting it up, like a Chapter 15 commission (the ones we have already mentioned). There are two other commissions established by ordinary law but envisaged by the constitution. These are on gender and equality, and the ombudsman; Parliament split the human rights commission as the constitution allowed. These have the same constitutional independence as the human rights commission. Lastly there is the commission on national cohesion and integration — not created by the constitution, but an Act, and designed to be independent.

The functions of those bodies are of different kinds, but each needs to be independent of other government bodies to discharge its functions—whether oversight, protection of rights, strengthening national unity, appointments and dismissal of state officers (who need to be protected against the whims and favouritism of politicians), ensuring independence of the electoral process, the integrity of the national and county financial systems, or eradication of corruption, particularly of politicians, parliamentarians and bureaucrats. The proper discharge of their functions, which are primarily designed to remove political, ethnic or partisan control over the staffing and activities of state agencies, and to ensure their impartiality and fairness, requires absolute independence.

This independence is protected in various ways under the constitution. Their members (called commissioners, responsible for the policy and decisions of the bodies, must satisfy the values criteria of Article 10. Chapter Six — hopefully citizens remember even if the government does not — requires appointment to be on the basis of integrity, competence and suitability, and behaviour marked by impartiality, selflessness and discipline.

Commissions are supported by staff whom they appoint and are accountable to them. Their salaries are — like those of judges — a “charge on consolidated fund”, which means they are not supposed to be voted on annually or discussed in Parliament. And pressure cannot be put on them by reducing their salaries or benefits.They are hard to dismiss — so not at political whim. They have power to investigate complaints made by a member of the public, including summoning witnesses, just like a court.)

Factors that may adversely affect that independence include how members are appointed. A common form of appointment, as for the Commission on Administrative Justice, is by the President setting up a selection panel. This consists of a member each from the presidential office, department responsible for justice, public service commission, association of professional societies in East Africa, and the National Council for Persons with Disabilities. Lists of candidates selected after interviews, which may consist of as many as three candidates for the chair and five for the other two positions, are sent to the President for nomination, thus giving him considerable choice and then go to the National Assembly for approval. Should the Assembly reject any presidential nominee, the matter goes back to the nominating panel.

This method is the result of legislation. The chances are that the National Assembly, carrying out its crucial role, will kowtow to the President. Individuals of independent mind are not very likely to be appointed. Once appointed, a commissioner can be removed by a process that again gives the President and the Assembly major roles—threatening the Commission’s independence.

These bodies were designed as independent (taking them outside the control of politicians and senior bureaucrats) due to the excesses, partiality, and corruption of governments ever since independence. They are important addition to state institutions; collectively, they may be referred to as the fourth arm of the state (though as I have shown above, they can be deeply influenced by the government).

Together, with a strengthened judiciary, these bodies represent a significant restructuring, and weakening, of the key state institutions. To take a few examples, a feature of the constitution is a strong and comprehensive Bill of Rights, which both prohibits the state from interfering with the rights and freedoms of individuals or communities, and compels it to protect their rights and ensure them the highest attainable standards of health, accessible and adequate housing, and to reasonable standards of sanitation; to be free from hunger; to clean and safe water in adequate quantities; to education; and social security. This establishes an enormous agenda for the state, both restricting it and compelling action, which it does not like. The chance that most of the poor and deprived will know of this agenda, much less demand its fulfillment, is remote. So the constitution assigns the major responsibility for human rights agenda to the human rights and equality commissions. This includes promoting respect for human rights and developing a culture of human rights; monitoring, investigating and reporting on abuses of human rights and taking steps to secure appropriate redress; and investigating complaints of abuse of power, administrative injustice or unlawful, oppressive and unfair official conduct.

The National Land Commission is required to change fundamentally the law and practices about land holding and alienation, and remedy present and past historical land injustices—for which the state has no appetite. Another commission (EACC) has been given a task to curb activities of state officers, which is passionately opposed by politicians, state secretaries and bureaucrats alike—and ensure the standards of integrity, objectivity, avoiding conflict of personal interests and professional duties—and other forms of corruption. The Salaries and Remuneration Commission has the unenviable responsibility of fixing salaries and allowances of greedy politicians and public servants, who control the government. The IEBC has an even more difficult task—to ensure fair and free elections, devoid of corruption and violence. The Commission on Revenue Allocation must ensure a fair distribution of national funds to counties, when the central government wants to dominate counties and increase its own pool of money. The Auditor-General has to ensure scrupulous commitment to an elaborate framework of public finances and to prevent the misuse –and worse, the theft – of state revenue, a time honoured practice in Kenya.

It will be clear from this brief account of the mandates of independent bodies that they are intended to bring about fundamental changes in the values and practices of state officials and the nature and objectives of the state. It is also obvious that any institution is likely to face many obstacles to achieve these objects, given Kenya’s political culture and practice.

In the coming weeks, experts will examine the record of a number of independent bodies as against their mandates.