"These tanks burn like all the rest. They are just very expensive," 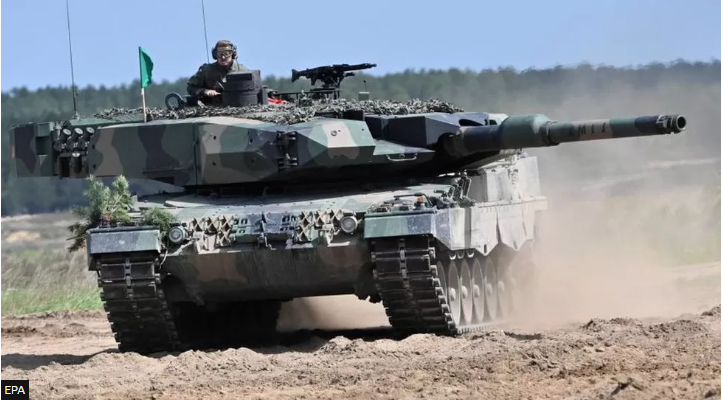 Ukraine's president has thanked Western leaders for sending tanks to support the fight against Russia, but said they needed to be delivered quickly.

His comments came after the US and Germany announced they would send Abrams and Leopard tanks to Ukraine.

Russia condemned the announcement as a "blatant provocation" and said any supplied tanks would be destroyed.

"These tanks burn like all the rest. They are just very expensive," President Vladimir Putin's spokesman said.

Mr Zelensky said he told Nato secretary general Jens Stoltenberg that "progress must be made in other aspects of our defence co-operation" - with Ukraine seeking supplies of long-range missiles and artillery.

He also pressed for not just the prompt delivery of Western tanks but also in significant numbers: "We must form such a tank force, such a freedom force that after it strikes, tyranny will never again rise up," he said.

US President Joe Biden announced on Wednesday that the US will send 31 M1 Abrams battle tanks to Ukraine.

The decision to deliver the tanks was announced just hours after Germany said it would send 14 of its Leopard 2s to the Ukrainian battlefield.

Berlin also cleared the way for other European countries to donate German-made tanks from their own stocks.

Ukraine has lobbied Western allies to send the equipment for months.

It hailed the twin announcements as a turning point that would allow its military to regain momentum and take back occupied territory almost a year after Moscow invaded.

It also said the tanks could help deter a potential Russian offensive in the spring.

Announcing the decision to put its tanks on the battlefield, US President Joe Biden said that "Putin expected Europe and the United States to weaken our resolve", adding: "He was wrong from the beginning and he continues to be wrong."

"We're also giving Ukraine the parts and equipment necessary to effectively sustain these tanks in battle," he said.

"This is about helping Ukraine defend and protect Ukrainian land. It is not an offensive threat to Russia."

A Ukrainian tank battalion typically consists of 31 tanks, which is why that number has been agreed upon, Mr Biden said.

The US decision, however, marks a reversal in their position as the Biden administration has insisted for some time that the heavy M1 Abrams tanks would be difficult to deliver, expensive to maintain and challenging for Ukrainian troops to operate.