•He said a review found that Mr Trump's accounts no longer represented a serious risk to public safety. 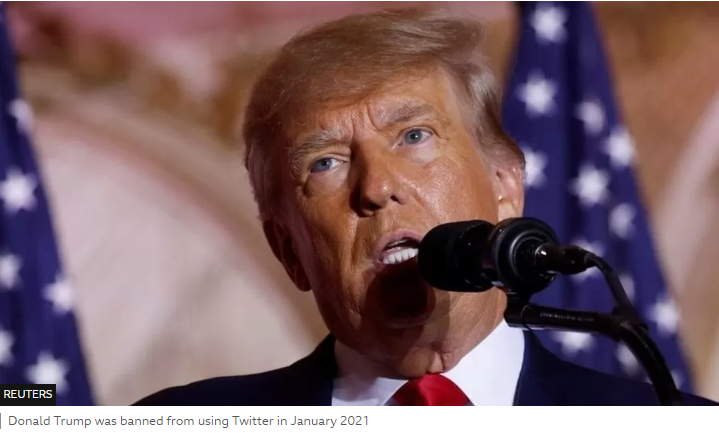 Donald Trump will be allowed back on to Facebook and Instagram, after Meta announced it would be ending its two-year suspension of his accounts.

The suspension will end "in the coming weeks", the social media giant said.

In a statement, Nick Clegg, Meta's president of global affairs, said the public "should be able to hear what their politicians are saying".

The firm had taken action following Mr Trump's "praise for people engaged in violence at the Capitol", Mr Clegg said.

He said a review found that Mr Trump's accounts no longer represented a serious risk to public safety.

But because of Mr Trump's past "violations" he would now face heightened penalties for repeat offences.

Republicans have been pressing for Mr Trump to be allowed back on Facebook as he prepares to run for the presidency again next year.

Mr Trump posted on his own social media company, Truth Social, in response on Wednesday, saying that Facebook had "lost Billions" after banning "your favorite President, me".

"Such a thing should never again happen to a sitting President, or anybody else who is not deserving of retribution!" he wrote.

Donald Trump now has a decision to make.

Truth Social, a social media platform he set up in 2021, has vastly fewer users than Facebook.

Truth Social may have as many as five million accounts - though it's likely it has far fewer active users.

However, Mr Trump has an exclusivity agreement with Truth Social - that means he is legally required to post first on the platform - six hours before any other platform.

It means if he posts on Facebook or Twitter -  there is a chance he could get sued.

Analysts also warn that if Mr Trump were to stop using Truth Social, or post content elsewhere, the platform would struggle to survive.

He could simply ignore that exclusivity agreement - and start posting content straight away.

However, that could open him up to legal problems.

What is also possible is that he simply waits until June, when the agreement times out.

Or, he could take the decision never to go back to platforms that he has criticised consistently.

However, if he is going to have a tilt at the White House, being on Facebook - the world's biggest social media platform - would make a lot of sense.

Whatever happens next, the ball is firmly in Mr Trump's court now.

If he does decide to come back, though, he will have to follow Meta's rules. The company has left the door open for another suspension if he flouts them.

It means Mr Tump will have to hold his tongue (to a certain extent) on Facebook, in a way that he doesn't currently have to on Truth Social.

News of Mr Trump's re-instatement was quickly criticised by Democrats and some activist organisations who expressed concern that the former president could again use the platform to repeat false claims that he won the 2020 election.

"Trump incited an insurrection," California Democratic Representative Adam Schiff wrote on Twitter. "Giving him back access to a social media platform to spread his lies and demagoguery is dangerous."

Derrick Johnson, the president of the NAACP, a civil rights organisation, told the Associated Press that he sees the move as a "grave mistake" that is a "a prime example of putting profits above people's safety".

"It's quite astonishing that one can spew hatred, fuel conspiracies, and incite a violent insurrection at our nation's Capitol building, and Mark Zuckerberg still believes that is not enough to remove someone from his platforms," he said.

Twitter had also banned the former president following the 6 January 2021 US Capitol riot, saying he had broken its rules on the glorification of violence.

But in November, Twitter's owner Elon Musk said Mr Trump's account ban had been lifted, after running a poll in which users narrowly backed the move.

Mr Trump has not yet returned to Twitter, having earlier said: "I don't see any reason for it."