Zero-Covid China asks: Is World Cup on another planet?

Many are feeling acute isolation watching this year's event. 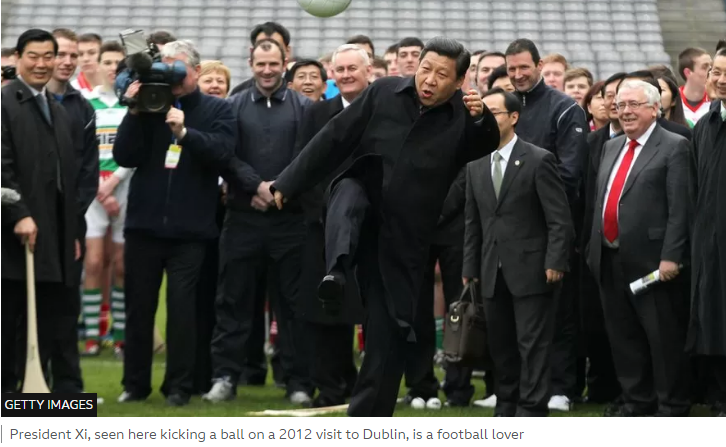 President Xi, seen here kicking a ball on a 2012 visit to Dublin, is a football lover
Image: HANDOUT

Chinese state media have given huge attention to the World Cup this week, but the matches are fuelling frustrations that people in the country are being left out of the celebrations.

On top of China's men's national team not qualifying for the event, scenes of maskless celebrations and raucous gatherings in Qatar have irritated viewers, who have been discouraged from gathering to watch the games.

Many have used the World Cup to complain online about China's existing strategies. The country maintains a zero-Covid policy, where entire communities are locked down over single cases of the virus, in order to prevent it from spreading.

China is currently experiencing its worst outbreak in six months, and localised lockdowns have surged over the last couple of weeks. In the past 24 hours, China has recorded more than 28,000 new cases; these are in every single provincial-level region.

Football is very popular in China. President Xi Jinping is known for being a lover of the sport, and he has spoken previously of it being a dream for the country to win the World Cup .

As a result, matches are being shown on national broadcaster CCTV, and state media have sought to amplify China's "presence". The Global Times has reported on how China-made products "ranging from buses to the [Lusail] stadium, and even air conditioning units are well represented at the event".

Leading outlets such as CCTV have also promoted the presence of Chinese flagbearers at the opening ceremony, and how two giant pandas arrived in Qatar to "meet" visitors arriving for the event.

But it is evident that Covid-19 has put a damper on the celebrations. In major cities, outbreaks have resulted in non-essential businesses once again closing, and people being urged to limit their movements.

With no bars to go to, the Global Times newspaper says some fans are "choosing to watch the games at home with their families". Others have also reportedly taken to camping sites.

Flights between Qatar and China also remain severely limited for those hoping to watch the event in person.

Many are feeling acute isolation watching this year's event.

An open letter questioning the country's continued zero-Covid policies and asking if China was "on the same planet" as Qatar quickly spread on mobile messenger WeChat on Tuesday, before being censored.

Comments on the Twitter-like Weibo social network are rife from viewers who speak about how watching this year's matches is making them feel divided from the rest of the world.

Some speak of their perception that it is "weird" to see hundreds of thousands of people gathering, without wearing masks or needing to show evidence of a recent Covid-19 test. "There are no separate seats so people can maintain social distance, and there is nobody dressed in white and blue [medical] garb on the sidelines. This planet has become really divided."

"On one side of the world, there is the carnival that is the World Cup, on the other are rules not to visit public places for five days," one says.

Some say they have had difficulty explaining to their children why the scenes from the World Cup are so different to those people face at home.

There are many in China, though, who have been critical of countries overseas opening up while the World Health Organization still calls the Covid-19 virus an "acute global emergency".

However, there is no end in sight to China's existing measures. This week, the National Health Commission spokesman "warned against any slacking in epidemic prevention and control" and urged "more resolute and decisive measures" to bring cases under control.

Local governments in major cities have reintroduced mass testing and travel restrictions and ultimately delivered a message that people should try to stay at home.

But after three years of such measures, people are frustrated, resulting in protests in the last month in both the cities of Guangzhou and Zhengzhou.

Fifa set aside Sh25 billion to be shared by clubs who have players at the World Cup
News
1 week ago
Post a comment
WATCH: The latest news from around the World
by BBC NEWS None
World
24 November 2022 - 13:20
Read The E-Paper