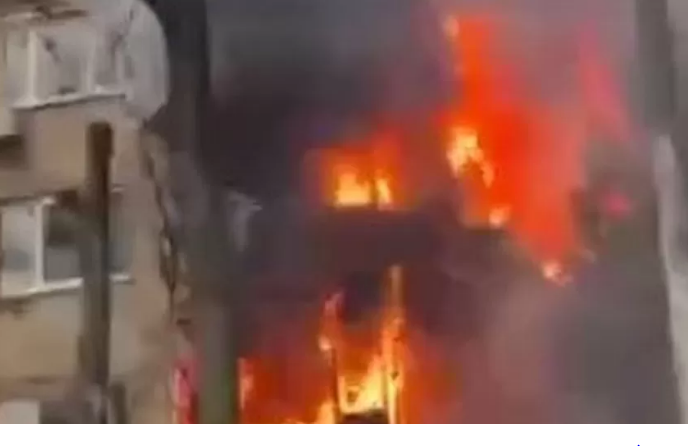 Volodymyr Zelensky's office shared a video of a building on fire, thought to be in Kyiv
Image: OFFICE OF THE PRESIDENT OF UKRAINE

President Volodymyr Zelensky has accused Russia of "crimes against humanity" after a new missile barrage caused blackouts across Ukraine.

He told the UN Security Council via videolink that the Russian "formula of terror" had forced "millions of people to stay without energy supplies, without heating, without water" in sub-zero cold.

The three plants still under Ukrainian control were disconnected from the grid and the Zaporizhzhia plant - Europe's largest - was forced again to rely on diesel generators to power its cooling systems and key safety equipment.

The International Atomic Energy Agency (IAEA) has voiced great concern about the Russian-controlled Zaporizhzhia plant, which has suffered damage from repeated shelling.

Neighbouring Moldova also experienced massive blackouts on Wednesday, but was not directly hit.

With winter setting in, Moscow has stepped up strikes on Ukraine's energy infrastructure.

Officials say Russia's missile strikes on power stations have caused "colossal" damage and left more than half of the country's grid in need of repair.

Late on Wednesday Mr Zelensky said the situation in Kyiv remained "very difficult" and efforts would continue through the night to restore electricity.

Mayor Vitali Klitschko said at least 80% of the capital's residents had no power or running water.

But Mr Zelensky said some other cities hit by Russian missiles had managed to restore power, including Lviv, Odesa and Cherkasy.

The US ambassador to the UN, Linda Thomas-Greenfield, said Russian President Vladimir Putin was "weaponising winter" to inflict immense suffering.

"Having struggled on the battlefield, Moscow is now adopting a cowardly and inhumane strategy that punishes Ukrainian men, women and children," she said.

In the southern Zaporizhzhia region, a newborn baby was killed when a missile hit a maternity unit, emergency services said.

Most of Ukraine's thermal and hydro-electric power plants were also forced to shut down, the energy ministry said.

Kremlin spokesman Dmitry Peskov did not comment on the attacks during a visit to the Armenian capital Yerevan, but stated that the "future and success of the special operation" - Moscow's term for its war in Ukraine - "are beyond doubt".

Moscow has said that attacking Ukraine's power grid could weaken Kyiv's ability to fight and drive its leaders to the negotiating table.

Kyiv requested the UN Security Council meeting, and Mr Zelensky urged the UN to do more to help Ukraine.

Earlier the European Parliament designated Russia a "state sponsor of terrorism" over its attack on Ukraine.

Soon after the parliament resolution was passed the Strasbourg assembly's website went down, because of what EU officials described as a denial-of-service attack by "pro-Kremlin" hackers.

More than half of Moldova was left without electricity, deputy prime minister Andrei Spinu wrote on Twitter. He said the attack on Ukraine's energy infrastructure had caused a "massive blackout".

Within a few hours power was restored in much of the capital, Chisinau, where a third of the Moldovan population lives.

Energy policy analyst Sergiu Tofilat said that as Moldova and Ukraine were connected to the European grid in March, one of the connection points on the power line between Moldova and neighbouring Romania shut down automatically if Ukraine was hit to protect the system: "We reconnect once Ukraine has assessed the damage."

In response to the outages, Moldovan President Maia Sandu said Russia had "left Moldova in the dark".

"Russia's war in Ukraine kills people, destroys residential blocks and energy infrastructure with missiles," she wrote on Facebook. "But the electricity supply can be restored. We will solve the technical problems and we will have light again. All state institutions are working in this direction."

Russia at the time said the attack had been staged.
News
1 week ago

The aid package is intended to counter Russian aerial attacks.
News
1 week ago

Zelensky earlier said that 10 million Ukrainians have been left without power.
News
2 weeks ago
Post a comment
WATCH: The latest news from around the World
by BBC NEWS None
World
24 November 2022 - 07:42
Read The E-Paper