The teenager who died was an Israeli-Canadian Jewish seminary student

•The explosions happened at two busy areas on the outskirts of the city as people were heading to work.

•The teenager who died was an Israeli-Canadian Jewish seminary student named Aryeh Schupak. 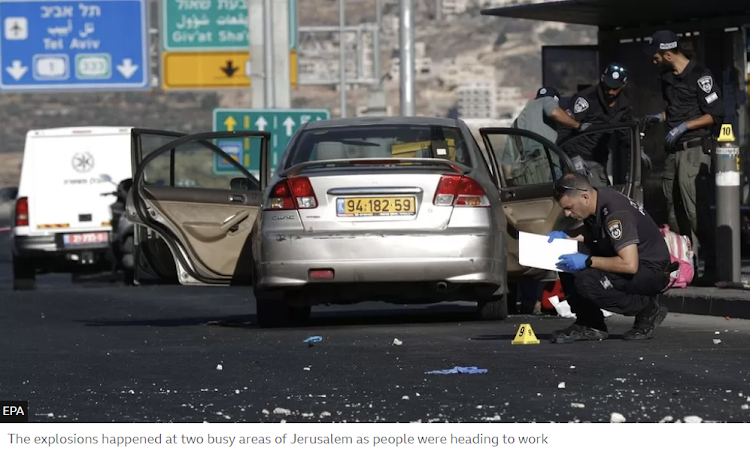 A 15-year-old boy has been killed and 14 other people have been wounded in two suspected bomb attacks at bus stops in Jerusalem, Israeli police say.

The explosions happened at two busy areas on the outskirts of the city as people were heading to work.

The teenager who died was an Israeli-Canadian Jewish seminary student named Aryeh Schupak.

Israel's prime minister said it was an attack that was "different from what we have seen in recent years".

The atmosphere feels volatile in a year of intensifying violence, as Palestinian gun and knife attacks have targeted Israelis, and Israeli military raids have killed Palestinian gunmen and civilians in the occupied West Bank.

No group has so far said it was behind the blasts. However, the Palestinian militant groups Hamas and Islamic Jihad both praised the perpetrators of what they referred to as the "operation".

The first explosion happened in Givat Shaul, close to the main entrance to Jerusalem, just after 07:00 (05:00 GMT) on Wednesday.

Israeli medics said the blast wounded 12 people, including the teenage boy who died later at the Shaare Zedek Medical Center.

About 30 minutes later, there was a second blast in Ramot Junction, another entrance to the city. It left three people with minor injuries.

At the scene of the first explosion, the pavement was scattered with debris. Masked Israeli security forces sealed off the site, while the pieces of a badly damaged bicycle were put into forensics bags.

One man from a Jewish ultra-Orthodox neighbourhood opposite told the BBC that he was woken as his building shook. Many of those waiting for buses were apparently from the community.

A small protest was also taking place with a sign held by young Israeli men calling for "revenge".

The head of the Israeli police's operations division, Deputy Commissioner Sigal Bar Zvi, said the bombs were made with "high quality" explosives and that they were placed in a bush and behind a wall at the bus stops.

Given the nature of the attacks, she added, investigators suspect they were masterminded by an organised cell.

Israeli media cited security sources as saying that both devices contained nails and were likely to have been detonated remotely.

Following a meeting with Israel's security chiefs, outgoing Prime Minister Yair Lapid said Aryeh Schupak "was a boy who never wronged anyone in the world, and he was murdered simply because he was Jewish".

He also pledged that security forces would "find these heinous terrorists, those behind them and those who provided them with weapons".

"I want to say to the citizens of Israel: We will find them. They can run, they can hide - it won't help them; the security forces will reach them. If they resist, they will be eliminated."

The attacks come as Prime Minister-designate Benjamin Netanyahu and his Likud party continue negotiations to form a new coalition government with allied far-right and religious parties. They won a majority in parliament in an election that centred on security.

"We still have a fight with cruel terror, which raise its head again," Mr Netanyahu warned as he visited survivors of the attacks in hospital. "We will do anything to bring back the security for the citizens of all Israel as soon as possible."

Ultra-nationalist Otzma Yehudit (Jewish Power) party leader Itamar Ben-Gvir, who is set to become Mr Netanyahu's internal security minister and oversee the police force, visited the scene of the first explosion and declared that Israel had to take action to deter Palestinian attacks.

"Even if it's in the West Bank, lay siege to them and go from house to house in search of guns and restore our deterrence power," he said.

Canadian Prime Minister Justin Trudeau tweeted that he was "incredibly saddened to learn about the death of a young Canadian in the terrorist attack in Jerusalem", which he condemned "in the strongest possible terms".

The US ambassador to Israel, Tom Nides, tweeted that an 18-year-old Israeli-American named Naomi Pilichowski was among those wounded in what he called the "heinous terrorist attack". Her father, the educator and author Rabbi Uri Pilichowski, said she had suffered a small cut.

This year has seen a spate of deadly attacks by Palestinians targeting Israelis, killing at least 25 people.

Meanwhile, Israel has carried out near nightly military search and arrest raids in the occupied West Bank. More than 130 Palestinians - including militant gunmen and civilians - have been killed.

The Israeli military said its troops fired at "armed suspects" during an operation "to secure the entrance of Israeli civilians to Joseph's Tomb". The tomb is revered by Jews, who believe the Biblical figure Joseph is buried there.

In a separate incident on Tuesday in the nearby city of Jenin, Palestinian gunmen kidnapped the body of a 17-year-old Israeli Druze boy who was fatally injured in a traffic accident near Jenin, his family said.

The uncle of Tiran Fero told the Haaretz newspaper that he was at Jenin's Ibn Sina Hospital with his nephew when a group of men "fired their weapons in the air and yelled in Arabic", then "disconnected him from the life support machines and threw him into a vehicle".

"If Tiran's body is not returned, the kidnappers will pay a heavy price," Mr Lapid warned on Wednesday.

Post a comment
WATCH: The latest news from around the World
by BBC NEWS None
World
23 November 2022 - 22:03
Read The E-Paper