Five members and supporters of the Oath Keepers militia, including founder Stewart Rhodes, are in court in Washington.

•They are charged with seditious conspiracy and a number of related lesser charges, including obstructing officers and destroying government property.

•The main charge of seditious conspiracy is rarely used and is defined in part as conspiring to use force "to prevent, hinder or delay the execution of any law of the United States". 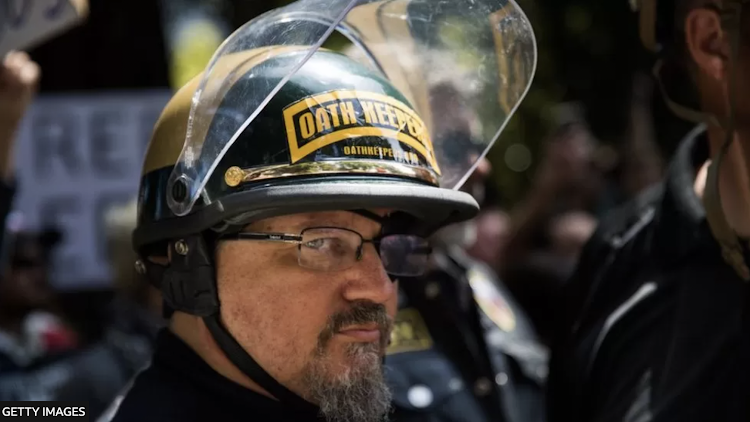 The Oath Keepers, led by Stewart Rhodes, have shown up at a number of protests and armed standoffs in the US over the past decade

A jury will begin deliberating on Tuesday in the trial of five people accused of the most serious crimes to date in connection with the 6 January 2021 assault on the US Capitol.

Five members and supporters of the Oath Keepers militia, including founder Stewart Rhodes, are in court in Washington.

They are charged with seditious conspiracy and a number of related lesser charges, including obstructing officers and destroying government property.

The main charge of seditious conspiracy is rarely used and is defined in part as conspiring to use force "to prevent, hinder or delay the execution of any law of the United States".

The US Department of Justice has not successfully prosecuted anyone on the charge since a group of Islamic militants were convicted in 1995 of plotting to plant bombs in New York City.

In the current case, prosecutors say the Oath Keepers' actions on 6 January were part of a scheme - prompted by Donald Trump's false claims of a "stolen" election - to prevent Joe Biden from becoming president.

Before closing arguments ended on Monday, the trial faced a number of delays over more than seven weeks, including a proposed witness suffering a heart attack, a surprise decision by one of the defendants to testify and Mr Rhodes coming down with coronavirus.

The defendants were pictured in numerous videos and photos among the throngs of people around the Capitol on 6 January last year. Some of them entered the building. But their lawyers have argued that there was never any concrete plan or conspiracy to storm the building in order to halt certification of the 2020 presidential election.

Prosecutors countered by arguing that they do not need to prove a specific plan to invade the building, only that the defendants agreed among themselves to attempt to halt the peaceful transfer of the presidency.

The government submitted a huge volume of text and chat app messages sent by the defendants. Some of the most dramatic evidence came from militia insiders and informants.

In one recording made by an informant, Mr Rhodes is heard saying: "We should have brought rifles. We could have fixed it right then and there." He goes on to talk about hanging House Speaker Nancy Pelosi.

The court also heard that the defendants stashed dozens of weapons in a hotel room in Virginia, just across the Potomac River from Washington DC. The city of Washington itself has strict gun laws.

The Oath Keepers referred to the cache as a Quick Reaction Force or QRF and talked about ferrying weapons into the city by car or boat in case of mass disorder. One Oath Keeper testified that it was the biggest cache of weapons he had seen since leaving the US military.

Defence lawyers argued that the fact the weapons were never used or even brought into the city bolsters their argument that the Oath Keepers were on a purely defensive mission, intending to protect protesters and keep the peace inside and outside the Capitol.

Mr Rhodes did not enter the Capitol, but instead stayed outside, taking phone calls and sending messages. He says he was preparing for Mr Trump to invoke the Insurrection Act, a law dating from 1807 that allows the president to deploy troops in the event of civil disorder.

If the jury does not deliver a verdict on Tuesday, the outcome of the trial will not be known until next week at the earliest because of the court being closed for the Thanksgiving holiday.

A pro-gun, anti-government group launched by Mr Rhodes in 2009, the Oath Keepers is named after the oath of service that police, military and other officials take. They focused recruitment efforts on people with military and law enforcement experience, along with other first responders.

Over the past decade, members have shown up at a number of protests and armed standoffs across the country.

Another group of Oath Keepers along with members of another far-right group, the Proud Boys, will go on trial on seditious conspiracy charges later this year.

Post a comment
WATCH: The latest news from around the World
by BBC NEWS None
World
22 November 2022 - 10:00
Read The E-Paper