Markets have already raised alarm over the plans, sending the pound plunging.

• In an unusually outspoken statement, the IMF said the proposal would be likely to increase inequality and add to pressures pushing up prices. 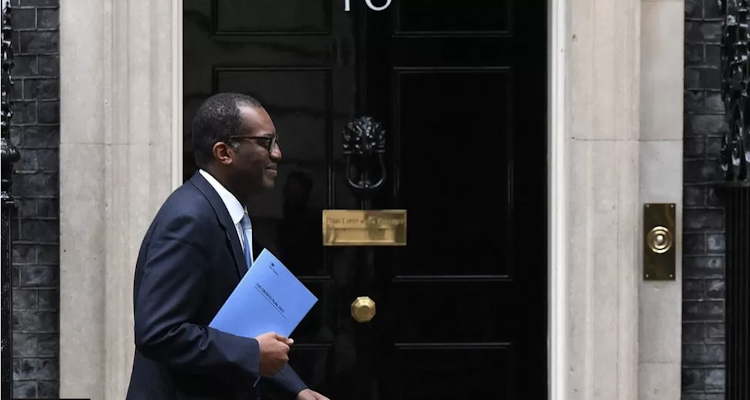 The International Monetary Fund has openly criticised the UK government over its plan for tax cuts, warning that the measures are likely to fuel the cost-of-living crisis.

In an unusually outspoken statement, the IMF said the proposal would be likely to increase inequality and add to pressures pushing up prices.

Markets have already raised alarm over the plans, sending the pound plunging.

The government says the measures will kickstart economic growth.

Chancellor Kwasi Kwarteng unveiled the country's biggest tax package in 50 years on Friday. The £45bn cut will be funded by government borrowing.

The IMF works to stabilise the global economy, and one of its roles is to act as an early economic warning system.

It said it understood the package aimed to boost growth via tax cuts, but it warned that the measures could speed up the pace of price rises, which the UK's central bank is trying to bring down.

"Furthermore, the nature of the UK measures will likely increase inequality," it said.

The IMF said that the government publishing a fiscal plan on 23 November gave it an opportunity to "re-evaluate" tax measures, "especially those that benefit high income earners".

The UK government proposals would scrap the top rate of income tax, and end a cap on bankers' bonuses, among other measures.

The announcement on Friday sparked days of financial turmoil, as investors dumped the pound and UK debt. On Monday the pound fell to record lows against the dollar.

Some of the country's biggest lenders suspended mortgage deals amid the uncertainty.

The Treasury said: "We are focused on growing the economy to raise living standards for everyone."

It added that Mr Kwarteng was due to publish his medium-term plan for the economy on 23 November, which would include ensuring that UK debt falls as a share of economic output in the medium term.

He told the Daily Telegraph: "The IMF has consistently advocated highly conventional economic policies. It is following this approach that has produced years of slow growth and weak productivity.

"The only way forward for Britain is lower taxes, spending restraint, and significant economic reform."

BBC economics editor Faisal Islam says the IMF's "stinging rebuke... reflected similar concerns from the world's major finance ministries that a crisis brewing in the UK could spill over into a global slowdown".

On Tuesday, the Bank of England signalled that it was prepared to ramp up interest rates in response to the slump in the value of the pound.

Its chief economist Huw Pill said the Bank "cannot be indifferent" to the developments of the past days.

He said the Bank would have to deliver a "significant monetary policy response" to protect sterling.

"I can't in all honesty remember a time when a set of policy announcements from a G7 country elicited so negative a response both from markets and from economic experts," he said.

"When a country sees its interest rates rise by [as much as they have] in two days at the same time that its currency is falling in a major way, that is a sign that there has been a major loss of market credibility and market confidence.

Asked about the UK's plans at an event in Washington, White House economic adviser Brian Deese said he had not been surprised by the negative reaction of the markets and that it was important to focus on "fiscal prudence, fiscal discipline", the Reuters news agency reported.

Moody's credit rating agency said on Wednesday that the UK's plan for "large unfunded tax cuts" was "credit negative" and would lead to higher, persistent deficits "amid rising borrowing costs [and] a weaker growth outlook". Moody's did not change the UK's credit rating.

This is an exceptionally blunt warning from the IMF, indicating that Kwasi Kwarteng's £45bn mini-Budget spree may not only have been ill-judged and risks sharper rate rises - but could also increase income inequality.

How likely is the latter?

The Truss government's growth plan centres on tax cuts for the better off, in the hope it will benefit wider society by boosting investment, innovation and job creation.

But a 2020 study by academics at the London School of Economics examined the impact of such policies in wealthy countries over five decades - and found they failed to significantly boost growth or jobs. They were more likely, the study claimed, to widen the gap between rich and poor.

At the very start of the Conservative leadership campaign, a top IMF official told me large-scale universal tax cuts in the UK would be a "mistake" .

Instead, as the energy price crisis has intensified, it's been calling for measures that are targeted towards the least well-off. And it's openly urging the government to focus on that when the Chancellor reveals the next instalment of his plans in November.

There's little indication so far those calls will be heeded.

Labour's shadow chancellor Rachel Reeves said the government must "urgently lay out how it will fix the problems it created through its reckless decisions to waste money in an untargeted cut in the top rate of tax".

"Waiting until November [when the fiscal plan is published] is not an option," she said. Instead, "the government must urgently review the plans made in their fiscal statement last week".

She added: "This statement from the IMF should set alarm bells ringing in government and make it clear that they need to act now."

"We are closely monitoring recent economic developments in the UK and are engaged with the authorities.

"We understand that the sizable fiscal package announced aims at helping families and businesses deal with the energy shock and at boosting growth via tax cuts and supply measures.

"However, given elevated inflation pressures in many countries, including the UK, we do not recommend large and untargeted fiscal packages at this juncture, as it is important that fiscal policy does not work at cross purposes to monetary policy.

"Furthermore, the nature of the UK measures will likely increase inequality.

"The November 23 budget will present an early opportunity for the UK government to consider ways to provide support that is more targeted and re evaluate the tax measures, especially those that benefit high income earners."

Post a comment
WATCH: The latest news from around the World
by BBC NEWS None
World
28 September 2022 - 07:20
Read The E-Paper