The Kremlin says reports of fighting-age men fleeing are exaggerated.

• President Vladimir Putin announced a partial military mobilisation on Wednesday, which could see 300,000 people summoned to serve in the war.

• But on the border with Georgia, miles-long queues of vehicles have formed including men trying to escape the war. 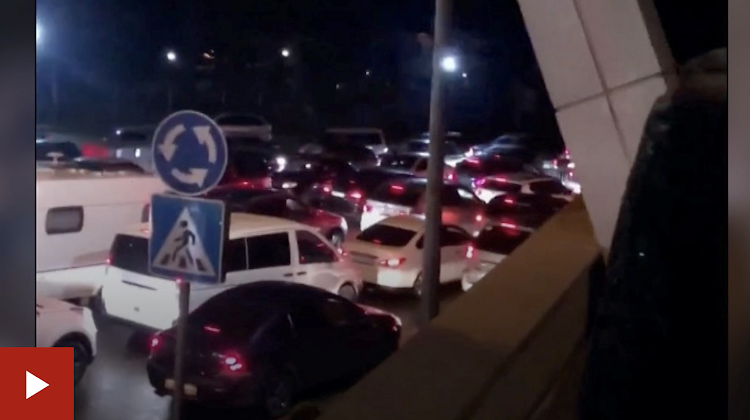 Russian men are attempting to leave the country, causing queues to form at border crossings, as they try to avoid a military call-up for the Ukraine war.

President Vladimir Putin announced a partial military mobilisation on Wednesday, which could see 300,000 people summoned to serve in the war.

The Kremlin says reports of fighting-age men fleeing are exaggerated.

But on the border with Georgia, miles-long queues of vehicles have formed including men trying to escape the war.

One man, who did not want to be named, told the BBC's Rayhan Demytrie he had grabbed his passport and headed to the border, without packing anything else, immediately after President' Putin's announcement - because he fell into the group that could potentially be sent to the war.

Some witnesses estimated the queue of cars at the Upper Lars checkpoint to be some 5km (3 miles) long, while another group said it had taken seven hours to get across the border. Video from the scene showed some drivers leaving their cars or trucks temporarily in standstill traffic.

Georgia is one of the few neighbouring countries that Russians can enter without needing to apply for a visa. Finland, which shares a 1,300km (800 mile) border with Russia, does require a visa for travel, and also reported an increase in traffic overnight - but said it was at a manageable level.

Other destinations reachable by air - such as Istanbul, Belgrade or Dubai - have seen ticket prices skyrocket immediately after the military call-up was announced, with some destinations sold out completely. Turkish media have reported a large spike in one-way ticket sales, while remaining flights to non-visa destinations can cost thousands of euros.

Germany's interior minister signalled on Thursday that Russians fleeing the draft would be welcome in her country.

'I will break my arm, my leg... anything to avoid the draft'

Sergei - not his real name - has already been called up.

The 26-year-old PhD student and lecturer was expecting a delivery of groceries the night before the Putin address, when two men arrived in civilian clothes handing him military papers to sign.

The Kremlin said only people who had done their military service and had special skills and combat experience would be called up.

But Sergei has no military experience and his stepfather is worried, as dodging the draft is a criminal offence in Russia.

The call-up sparked protests in major Russian cities including Moscow and St Petersburg on Tuesday, resulting in a reported 1,300 arrests.

There were also reports from Russia that some of those detained for protesting had been handed draft papers while in custody at police stations. Kremlin spokesman Dmitry Peskov, when asked about the reports, said that doing so was not against the law.

Ukrainian President Volodymyr Zelensky urged Russians to resist the mobilisation during his nightly address on Thursday.

Referring to Russian deaths in the war, he said: "Want more? No? Then protest. Fight back. Run away. Or surrender to Ukrainian captivity."

The reaction to the military mobilisation inside Russia has been unusually strong.

The UK's Ministry of Defence, commenting on the call-up in its Wednesday morning briefing, noted that the mobilisation "is likely to be highly unpopular with parts of the Russian population".

"Putin is accepting considerable political risk in the hope of generating much-needed combat power. The move is effectively an admission that Russia has exhausted its supply of willing volunteers to fight in Ukraine," it said.

Even if successful, challenges remain - and it is unlikely new units will be ready for combat for several more months, the defence intelligence update said.

Russian officials insist the call-up will be limited to those who had completed military service, and fall short of widespread conscription.

But inside Russia, there is also speculation that the military mobilisation could be larger than formally announced.

The independent Novaya Gazeta newspaper, which moved its operations to Europe amid a post-war crackdown on media, reported that Vladimir Putin's decree contains an additional paragraph which has been classified and kept secret.

The newspaper alleges that the secret paragraph allows for a call-up of up to a million people, rather than the reported 300,000, citing an unnamed government source.

Post a comment
WATCH: The latest news from around the World
by BBC NEWS None
World
23 September 2022 - 07:00
Read The E-Paper