•Her death sparked protests in the capital and western Iran, where two people were reportedly killed in clashes with riot police on Monday. 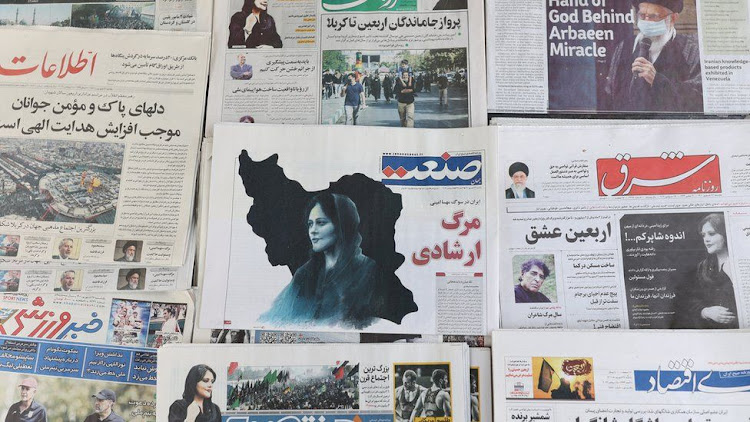 Tehran's police chief says the death of a woman in custody was an "unfortunate" incident he does not want repeated.

Her death sparked protests in the capital and western Iran, where two people were reportedly killed in clashes with riot police on Monday.

Videos posted on social media appeared to show a crowd throwing stones in the town of Divandarreh and later running after coming under fire.

Other footage showed protests in the capital, where women removed their headscarves and shouted "death to the dictator" - a chant often used in reference to the Supreme Leader, Ayatollah Ali Khamenei.

Ms Amini, an ethnic Kurd who was from the western city of Saqez in Kurdistan province, died in hospital on Friday after spending three days in a coma.

She was detained outside a metro station in Tehran on Tuesday by morality police. They accused her of breaking the law requiring women to cover their hair with a headscarf, and their arms and legs with loose clothing.

According to witnesses, she was beaten while inside a police van that took her to a detention centre.

Police rejected the allegation and said she suffered "sudden heart failure" while waiting with other women at the facility to be "educated".

They released CCTV footage that showed a woman they identified as Ms Amini talking with a female official, who grabs her clothing. She is then seen holding her head with her hands and collapsing to the ground.

However, her father told pro-reform news outlets on Sunday that she was "fit and had no health problems". He also said his daughter had suffered bruising to her legs and that the CCTV footage showed an "edited version" of events.

On Monday, Brig-Gen Rahimi expressed sympathy to Ms Amini's family, but insisted that she suffered no physical harm.

"The evidence shows that there was no negligence or inappropriate behaviour on the part of the police," he told reporters.

The death triggered widespread criticism of the actions of the morality police, which recently launched a crackdown on "improper clothing".

Protests erupted in Saqez after her funeral on Saturday, with security forces reportedly opening fire on a crowd that marched towards the local governor's office.

There were also clashes between protesters and riot police in Sanandaj, Kurdistan's capital, on Saturday and Sunday.

Kurdish human rights group Hengaw said on Sunday that at least 38 people were injured in the two cities.

Hengaw reported the deaths of two protesters following Monday's clashes in Divandarreh, which is located between Saqez and Sanandaj. It also said a 10-year-old girl was shot in the head in Bukan, a city in West Azerbaijan province.

Post a comment
WATCH: The latest news from around the World
by BBC NEWS None
World
20 September 2022 - 10:00
Read The E-Paper