Ukraine's day of independence falls six months to the day since Vladimir Putin launched an invasion from the north, east and south.

• The former Ukrainian president was poisoned with a toxic chemical while campaigning in 2004 against a Moscow-preferred candidate.

• He then led protests against a rigged election before taking office the following year. 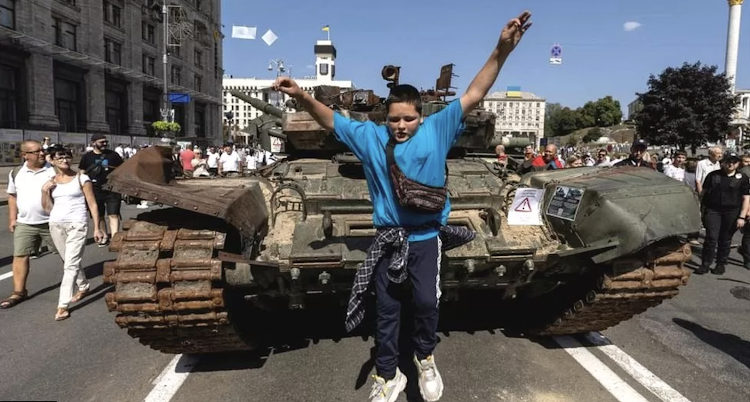 The former Ukrainian president was poisoned with a toxic chemical while campaigning in 2004 against a Moscow-preferred candidate. He then led protests against a rigged election before taking office the following year.

Sitting in his timber-framed home on the outskirts of Kyiv, Mr Yushchenko praises the "power of national spirit" as the key to Ukraine's independence.

"Today I can say with confidence that 42 million Ukrainians speak in one voice. And that allows us to face any enemy, including Russia."

You can still see the scarring on the former president's face from when he was poisoned.

Ukraine's day of independence falls six months to the day since Vladimir Putin launched an invasion from the north, east and south. In that time, almost 9,000 members of the Ukrainian military have been killed and some 5,500 civilian deaths have been confirmed by the UN.

While few here predicted the war, Mr Yushchenko largely blames what he sees as the West's historic inability to combat Russian aggression: notably the 2008 conflict in Georgia and the annexation of Crimea six years later.

However, he thinks Ukraine's ultimate test has changed its standing in the world.

"Today, when more than 50 countries have expressed solidarity with the ideas of our fight. They're providing all kinds of support - military, financial and humanitarian."

Carpentry now occupies most of the former statesman's time. We are surrounded by dozens of sculptures, and the former president tells me of his absolute belief that Ukraine can carve out a victory in this war.

The more Russia tries to pull Ukraine into its orbit, the stronger its people's sense of national identity becomes.

She started getting requests from military checkpoints early on in the invasion, now she gets more than 2,500 orders a month - not just from the army, but businesses too.

"These are very dear colours to us," she tells me over the whirring sound of sewing machines.

"Every Ukrainian feels these colours and we see them in everything - in the sky, in wheat. This gives us pleasure, joy and positive emotions, because our work is useful."

Six months into the war, Ukraine is presented with some uncomfortable realities.

After weeks of talking about it, Ukraine's planned counter-offensive in the south, on the occupied city of Kherson, has yet to materialise.

Yes, there have been longer range missile strikes deeper into Russian-held territory, but this war is now dominated by artillery along an almost static front line.

So far Western weapons are helping Ukraine to hold the line and frustrate Russian supply lines, but it will take something seismic for the momentum to shift and for Kyiv to force Russia out completely.

Therefore, this military status quo looks set to continue, at a growing, unimaginable cost for tens of thousands of families.

Also - while widely viewed as the country's war hero, President Volodymyr Zelensky is now facing criticism for how he prepared for Russia's attack. Notably over his decision not to act on warnings from the US, saying it would cause panic and damage Ukraine's economy.

Another symbol of Ukrainian defiance is in the newsroom of the Kyiv Independent.

This English language news site was set up weeks before the invasion. Within days their online following went from tens of thousands to millions.

"It's the Independence Day we didn't know was going to happen," says editor-in-chief Olga Rudenko.

She describes the publication as the voice of Ukraine, and the world's window into it.

"Back in February, when things were so uncertain, we didn't know whether most of the country would be invaded or whether we'd be killed," she says. "To still be here, to be able to celebrate, is so meaningful."

A recent deal, which has allowed Ukraine once again to export grain through the Black Sea, remains the only diplomatic breakthrough in this war.

Some see it as the basis for an eventual peace treaty.

That is a long way off, and Ukraine has already lost control of a fifth of its territory.

To maintain its independence, this country will be dependent on the outside world for help for some time yet.