Ukraine: We had nothing to do with Russian murder

Ms Dugina, a commentator on a Russian nationalist TV channel, died when her car blew up on the outskirts of Moscow.

• A memorial service for Ms Dugina, 29, was taking place in Moscow on Tuesday. 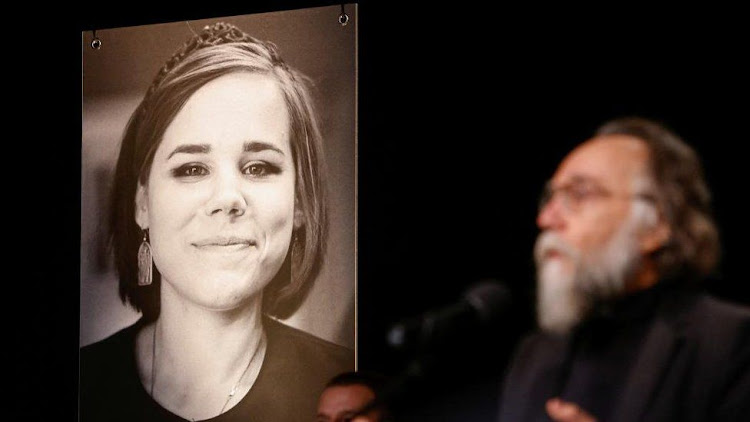 A memorial service was held for Darya Dugina on Tuesday and her father gave a speech
Image: REUTERS/BBC

Ukrainian officials have ridiculed Russia's accusation that its special services were behind the killing of Darya Dugina, the daughter of an ultra-nationalist, in a car-bomb attack.

A memorial service for Ms Dugina, 29, was taking place in Moscow on Tuesday.

Ms Dugina, a commentator on a Russian nationalist TV channel, died when her car blew up on the outskirts of Moscow.

Her influential father, Alexander Dugin, may have been the intended target of the attack. His expansionist ideas of a New Russia or "Novorossiya" on Ukrainian territory are said to have influenced President Vladimir Putin's annexation of Crimea in 2014.

Her 60-year-old father paid tribute to her as a "rising star at the start of her journey". She was brutally murdered in front of him by Russia's enemies, he said, and he went on to call for victory over Ukraine. Ms Dugina's memorial service took place at Russia's Ostankino TV centre on Tuesday morning.

In Kyiv, the security and defence council secretary said Ukraine had nothing to do with the bombing: "We have more important tasks for our boys and girls... The FSB did this and is now suggesting that one of our people did it," he was quoted as telling Ukrainian TV.

Russia's Federal Security Service (FSB) said it had solved the case and blamed Ukraine directly. Its claims were widely reported by state TV, and pro-Kremlin commentators called for immediate revenge.

The Russian outcry came as Ukraine prepared to mark 31 years of independence on Wednesday, which coincides with six months since Russia's invasion of Ukraine began.

The US state department has warned that Russia is stepping up efforts to attack Ukrainian civilian infrastructure and government facilities. Fears of an escalated Russian attack have prompted Kyiv to ban public events while the city of Kharkiv has brought forward an overnight curfew to start at 16:00 local time (13:00 GMT).

According to the FSB's account of Darya Dugina's death, a Ukrainian woman linked to security services in Kyiv had moved to Russia in July alongside her young daughter.

The woman had rented an apartment in the same building as Ms Dugina for a month, preparing for the attack, it alleged. In that time, she allegedly followed her target through Moscow in a Mini Cooper - for which she used three different licence plates.

The FSB later released video purporting to show the suspect's car entering Russia, then of her entering Ms Dugina's building and finally leaving Russia for Estonia. 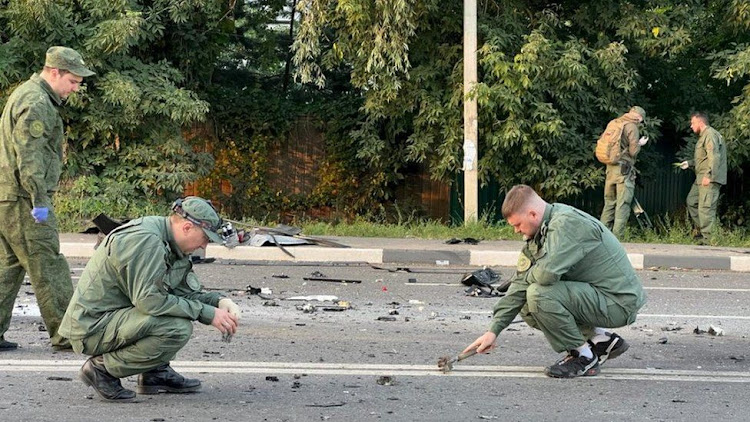 Russian investigators released this photo of teams inspecting the site of the explosion
Image: REUTERS/BBC

Ms Dugina and her father were attending a festival near Moscow on Saturday evening where he was giving a lecture. They had reportedly intended to leave in the same car, but changed their plans at the last minute.

Investigators said explosives had been planted underneath the Toyota Land Cruiser she was driving. Video appeared to show him looking on in shock as her car burned.

Ms Dugina was a vocal supporter of the Russian invasion of Ukraine and a political commentator for her father's International Eurasian Movement organisation. She wrote regularly for pro-Kremlin media outlets and had been placed under sanctions by the UK in July as "a frequent and high-profile contributor of disinformation in relation to Ukraine".

"My daughter Darya Dugina was brutally murdered in front of me," his statement on Telegram read. "She was a beautiful Orthodox woman, patriot, war reporter, an expert for central TV and philosopher."

Russian media linked the suspect identified by the FSB to Ukraine's Azov regiment, which Moscow says is a terrorist group. The Azov regiment flatly denied the allegation.

Estonia rejected the Russian claim that Ms Dugina's alleged killer had fled across the border as a "provocation in a very long line of provocations by the Russian Federation".

Independent Russian outlet Agentstvo raised several questions about the FSB version of events, surrounding the woman identified as the killer and the Mini Cooper car. It wondered why she would take a child with her on such a dangerous mission and said video of the car had been posted in the Kyiv region three days before the blast.

Exiled former Russian MP Ilya Ponomarev argued it was the work of a little-known Russian resistance group called the National Republican Army. The former MP who moved to Ukraine said the group had carried out several actions already, although there was no public reference to the group before Sunday.