Afghan contractors: 'I wish I'd never worked for the UK government'

He has previously been detained by the Taliban - and fears his work has put his family at risk too.

• Ammar is one of more than 100 teachers who worked with the British Council, in public-facing jobs, who have been left behind in Afghanistan. Many of them are women.

• "They took me to the police station asking about whether I'd worked for a foreign government. Luckily they didn't find any evidence in my home or on my phone. 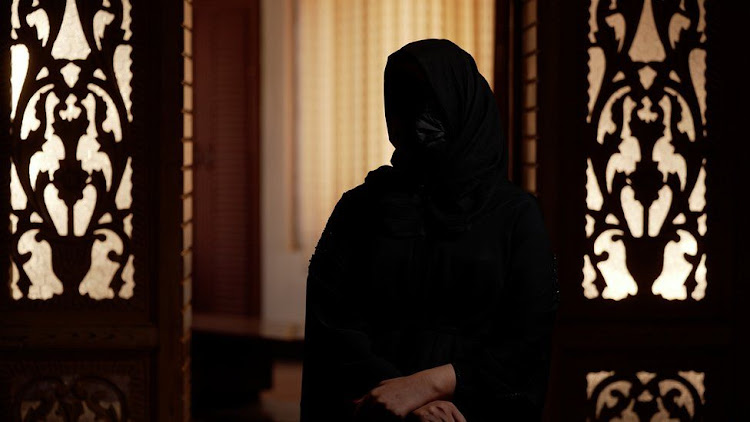 Nooria, who was an English teacher before the Taliban takeover, has been in hiding since the group seized power
Image: BBC

In a nondescript white plastic bag, Ammar carried a clutch of papers that are among his most precious belongings right now.

It would've attracted too much attention for us to visit his home, so on his motorcycle, he'd come to meet us at a secure location, scared during the journey that he might get searched at a Taliban checkpoint and they might find the papers.

The documents included his contract as a teacher with the British Council for two years, and other evidence of his association with the UK, that he hopes will help get him and his family to safety. He fears for his life because of his work with the UK government.

"We taught the culture of the United Kingdom and their values in Afghanistan. In addition to the English language, we also taught about equality, diversity and inclusion. According to their [Taliban] beliefs, it is out of Islam, it is unlawful. That's why they think we are criminals and we have to be punished. That is why we feel threatened," he said.

He has previously been detained by the Taliban - and fears his work has put his family at risk too.

"They took me to the police station asking about whether I'd worked for a foreign government. Luckily they didn't find any evidence in my home or on my phone.

"But I don't think it's the end. They are keeping an eye on me."

Ammar is one of more than 100 teachers who worked with the British Council, in public-facing jobs, who have been left behind in Afghanistan. Many of them are women.

Nooria was also part of an English-teaching programme.

"It was challenging for us. They had extremist thoughts, and would often say what you are teaching is unacceptable to us. Everywhere we went, we were seen as representatives of the British government.

"Some thought of us as spies for the UK." That, she says, puts her and her family at risk in Afghanistan under Taliban rule. 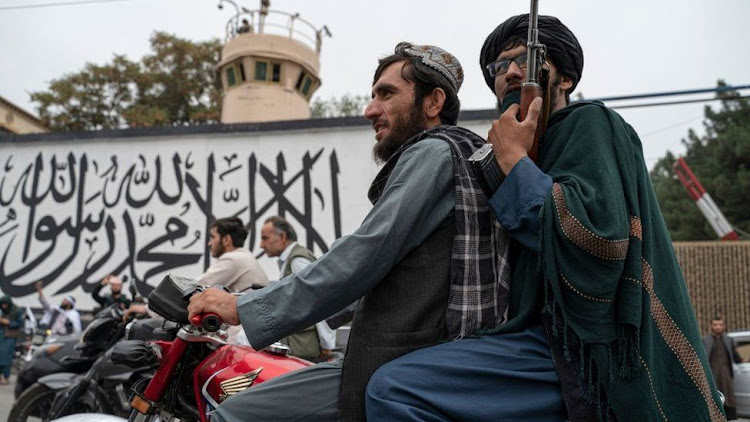 Taliban fighters patrolled the streets of the capital Kabul on the anniversary of their recapture of Kabul
Image: GETTY IMAGES/BBC

While the group announced a general amnesty for everyone who worked for the previous regime and its allies, there is mounting evidence of reprisal killings. The UN has documented 160 cases.

Nooria has been in hiding since the Taliban seized power in August last year.

"It's really stressful. It's worse than a prisoner's life. We cannot walk about freely. We try to change our appearance when we go outside. It's affected me mentally. Sometimes I feel like it's the end of the world," she said.

She accuses the British Council of discriminating between its staff.

"They relocated those who worked in the office, but left us behind. They didn't even tell us about the Afghan Relocation Assistance Policy (ARAP) when it came out."

Nooria and the other teachers have now applied for relocation through another UK scheme called Afghan Citizens Resettlement Scheme (ACRS), but have so far only received reference numbers.

The British Council says that when the ARAP scheme first opened, the UK government only considered applications from employees which included their office staff but not the teachers and other contractors.

They also say they have been pushing for progress with the UK government.

The UK Foreign Office has said that British Council contractors are eligible for relocation under the ACRS scheme, and that it's trying to process applications quickly but there's no answer on how long that could take.

"It's only if a contractor dies that I think they might take prompt action. And then they might feel that, yes, they are at risk. Now let's do something. I think sooner or later, this is going to happen," Ammar said.

The path to safety is even more uncertain for those who worked with the UK government in some other roles.

Jaffer worked as a senior adviser facilitating the implementation of UK government-backed development projects in Afghanistan.

He was directly employed by British companies - some founded by the UK government, others given contracts by it. He also worked in similar roles for the US government, including at bases of the US military.

Even prior to 2021, Jaffer had received threats from the Taliban, during a wave of killings carried out by the group that targeted prominent Afghan civil society members.

He showed us one of the notes he received, which accused him of being a spy for foreign governments and threatened that he would be killed for his "betrayal of the Islamic faith".

He showed us a summons letter sent to his family home earlier this year, from the Taliban's interior ministry asking him to go to a police station for investigation. He's received three such letters.

"I've been in hospital because of stress and shock. I can't sleep. The doctor has given me strong medicines but even those don't help much. My wife is also suffering from depression. I don't let my children go to school. I fear they might be recognised," he said.

Jaffer has been refused a special immigrant visa (SIV) from the US, because he's unable to get a recommendation letter from his supervisor who died due to Covid-19.

During the chaotic evacuation which followed the Taliban's unexpectedly quick takeover of Afghanistan, Jaffer had been called to the airport by a UK official. Along with his young children and his wife, he sat in a bus outside the airport for six hours.

"My son was feeling sick, but we couldn't even open the windows of the bus, because people outside, desperate to get out would try to enter. The Taliban were firing in the air. My son saw that and he was so traumatised." 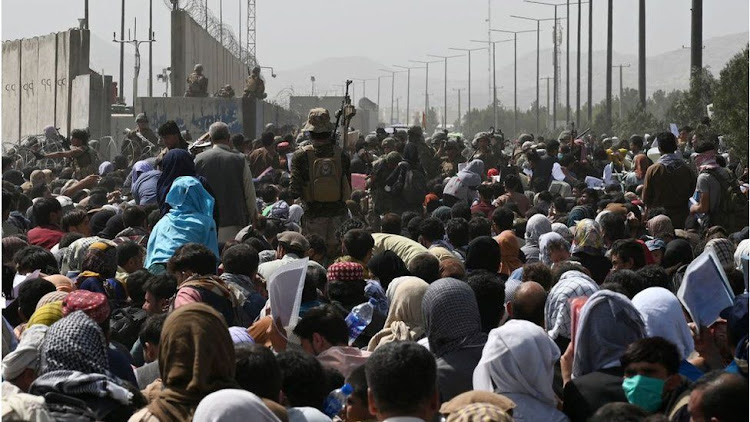 A year ago, tens of thousands of Afghans rushed to Kabul airport in the hope of escaping the Taliban who were closing in
Image: GETTY IMAGES/BBC

It was the same day the airport was attacked by suicide bombers who killed more than 180 people.

The UK on-the-ground evacuation process was wrapped up, and Jaffer and his family didn't get through.

Since then, he's only received a case number from the UK government in response to his application to the ARAP scheme.

"I worked with them. I facilitated them. Our Afghans on the ground didn't hate them [foreign nationals] because we convinced people to allow the projects to take place. We faced the threats, and now I'm left like this. I don't have any place in the world where I can live with safety and dignity," he said, his voice quivering as he spoke.

"What will my children's future be? My daughter can't study. I had big dreams for her. Will my young sons become extremists? I keep asking why did I bring them into this world. If this is what their future is going to be maybe they shouldn't be alive," he said.

We spoke to at least three other people who worked with the UK government, including a combat interpreter who went to the front line with British troops. They all spoke of a sense of betrayal by people they risked their lives for. 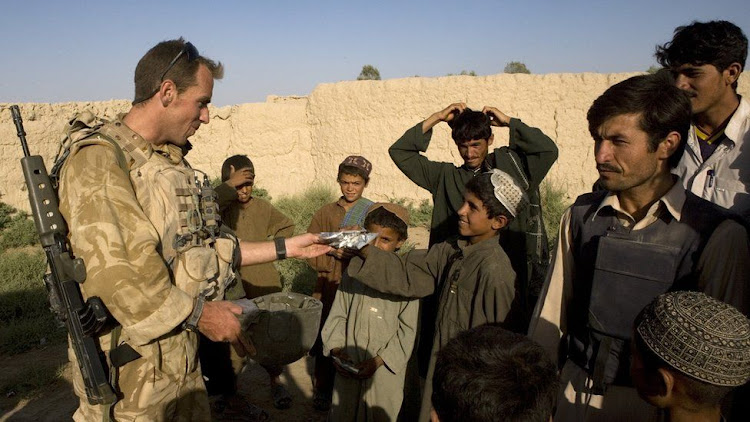 Some 2,850 interpreters have worked with British forces in Afghanistan
Image: GETTY IMAGES/BBC

The UK government evacuated 15,000 people in August last year, and 5,000 more people since then.

But thousands more are waiting, living each day in fear, stuck in limbo, expectantly looking at their email inboxes for a thread of hope.

"I used to be proud of working for the UK government," Nooria said.

"But I regret it now. I wish I'd never worked for them because they don't value our life and our work, and have been cruel in leaving us behind."

Names in this piece have been changed to protect the identity of the contributors.