The Met Office said temperatures would remain below those record highs, but that this heatwave could last longer.

•The warning applies to southern and central England and parts of Wales from midnight on Thursday until Sunday.

•It follows the first ever red warning issued in July, when temperatures in parts exceeded 40C for the first time. 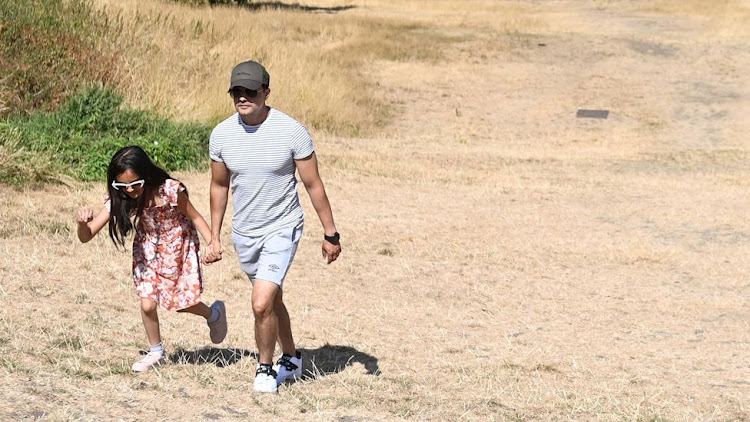 The Met Office has issued a four-day amber extreme heat warning, with temperatures set to reach up to 35C (95F) in some areas this week.

The warning applies to southern and central England and parts of Wales from midnight on Thursday until Sunday.

It follows the first ever red warning issued in July, when temperatures in parts exceeded 40C for the first time.

The Met Office said temperatures would remain below those record highs, but that this heatwave could last longer.

An amber heat warning indicates that the heat is likely to impact the health of vulnerable people, and that others are likely to suffer sunburn or heat exhaustion.

Heat-sensitive equipment is more likely to fail, and some delays to road, rail, and air travel are possible.

The UK Health Security Agency (UKHSA) has also issued a level-three heat-health alert to apply from Tuesday to Saturday.

Hosepipe bans are in force in Hampshire and on the Isle of Wight, and on Friday others are due to come into force in Kent and Sussex.

Bans will also be introduced in Pembrokeshire and Carmarthenshire later this month, and on Sunday Environment Secretary George Eustice called on more water companies to take action.

England had its driest July this year since 1935, according to the Met Office, while south-east and central southern England had the driest month since records began in 1836.

Between the start of this year and 6 August, the south-east recorded 144 days with average rainfall of less than 0.5mm. Of those, 57 saw no rain at all.

Warnings of the threat posed by wildfires have been issued, with fire services urging people not to light bonfires or barbecues, or let off fireworks or sky lanterns.

The heatwave combined with months of dry weather have also led to warnings of growing problems for farmers, with grass not growing and irrigation water running low cited as two key concerns.

Met Office meteorologist Tom Morgan said a "fairly widespread heatwave" was developing across the UK this week with the peak of the temperatures likely to be on Friday or Saturday.

Temperatures will build from 28C or 29C on Tuesday and reach the low to mid-30s from Thursday, Mr Morgan said.

"It does look like a prolonged period of dry weather and obviously that's bad news for southern England where some rain would really be useful now."

He added that the West Midlands and the West Country could see the highest temperatures with a maximum of around 35C, but this is uncertain.

The level-three alert issued by the UKHSA applies to southern and central England from midday on Tuesday until 18:00 BST on Saturday.

The alert "requires social and healthcare services to target specific actions at high-risk groups", though again is one stage lower than the most serious level-four alert issued last month.

A level-two alert will be in place for northern England for the same period.

Dr Agostinho Sousa from the UKHSA emphasised it is important to ensure that vulnerable people, like the elderly who live alone and anyone with underlying health conditions, are "prepared for coping during the hot weather".

"The most important advice is to ensure they stay hydrated, keep cool and take steps to prevent their homes from overheating," he added.

A heatwave is defined as above average temperatures being reached for three days or more. Heatwaves are becoming more likely and more extreme because of human-induced climate change.

The world has already warmed by about 1.1C since the industrial era began, and temperatures will keep rising unless governments around the world make steep cuts to emissions.

We are living in the hottest period for 125,000 years, according to the UN's climate science body, the Intergovernmental Panel on Climate Change.

Tips for staying cool and safe