Sydney floods aftermath: 'Everybody is traumatised'

While some cars are barely visible, others are completely submerged.

•Mathew Benson has been rowing up and down one of the streets in a neighbourhood in the suburb of Australia's largest city.

•"I'm bringing food and water to people over there," he tells me, pointing to the other side. "We're just watching and waiting." 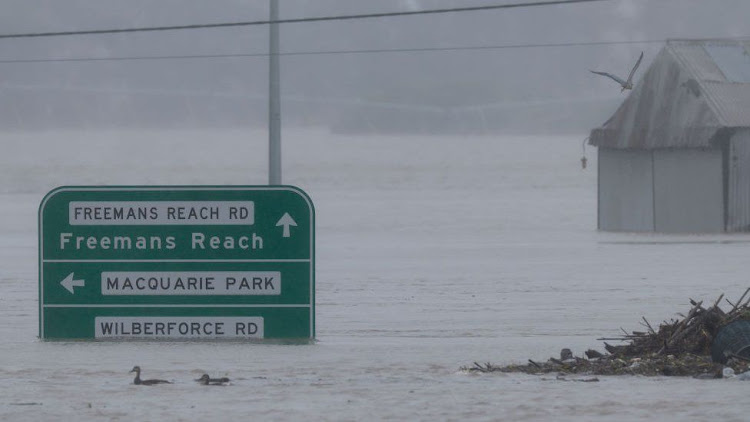 Submerged road signs on Monday along the Hawkesbury river in Windsor, near Sydney

In the town of Windsor, north-west of Sydney, some roads have turned into small rivers. And the only way to get around is by boat.

Mathew Benson has been rowing up and down one of the streets in a neighbourhood in the suburb of Australia's largest city.

"I'm bringing food and water to people over there," he tells me, pointing to the other side. "We're just watching and waiting."

While some cars are barely visible, others are completely submerged. Many residents in the area have had to leave their homes and others are stranded as roads have been cut off. Thousands have been left without power.

Another local, Sam, points to her house just across the submerged road. "We don't know about the second floor. But the first floor is definitely flooded," she tells me in tears.

This is the second time this has happened to her this year. Her house was damaged in the floods back in March. This time, she has had to move in with her mother who now also has to evacuate.

It's all been too exhausting and emotional and she breaks down.

"We just got back on our feet. We'd just cleaned up our house and fixed it up. And now this…" she said.

Windsor is a close-knit community.

Most of those I have spoken to have grown up in the area or have been here for at least two decades. Despite the fact that this is their third extreme flooding event in 18 months, many told me they wouldn't want to move.

But you can sense that everyone is exhausted. Not just from dealing with the current crisis, but from having to deal with one disastrous weather event after another.

She is the co-founder of local charity Hawkesbury's Helping Hands and has been helping people here for years, especially during natural disasters.

I meet her on one of the streets in South Windsor where people have been stranded. Swathes of farmland now are completely covered in water.

"Everyone is in disaster mode now. The most important thing is to make sure people are safe and have something to eat and know that someone cares."

Ms Strickland adds that while rebuilding will take a long time, her worry going forward is the mental and psychological toll this will take on the community.

"There needs to be someone counselling at every evacuation centre," she said.

"I've never seen a flood like this in the 20 years I've lived here."

The wet weather has been relentless, with parts of Sydney getting eight months' worth of rain in four days.

The newly-built Windsor bridge, which was supposed to be flood resistant, is hardly visible as the water continues to rise.

Stuart Reed, 55, has lived in Windsor all his life and said this is unprecedented.

"It just seems to be happening a lot more often," he said.

"Apart from the trauma that this causes it's financially crippling as well. I just walked through town here and half the shops are shut."

The New South Wales state Premier Dominic Perrottet has said it is time to let go of the idea that floods like this happen "once in a century" after some regions experienced their fourth deluge in less than two years.

Sydney's main dam has been over-spilling through the night and the authorities have warned of more flood risks.

"It's crazy being told you have to leave your home and just grab what you can," Chloe Neich said.

This is the first time she's had to evacuate.

"A lot of stuff has been left behind and we don't really know what we're going back to. We're just hoping that our house is safe. And that we can get back to normal."

I ask what normal is for her?

"Not flooding," she smiles. "Kids out in the sun and park. Not worrying about whether they have a house."