Citizens were urged to be vigilant around objects that may have blown across the border from the South.

• An 18-year-old soldier and five-year-old child tested positive for the virus in early April after finding the objects on a hill in Ipho-ri, it reported.

• Anyone who notices a strange object is instructed to report it immediately so it can be swiftly removed by an emergency anti-epidemic team. 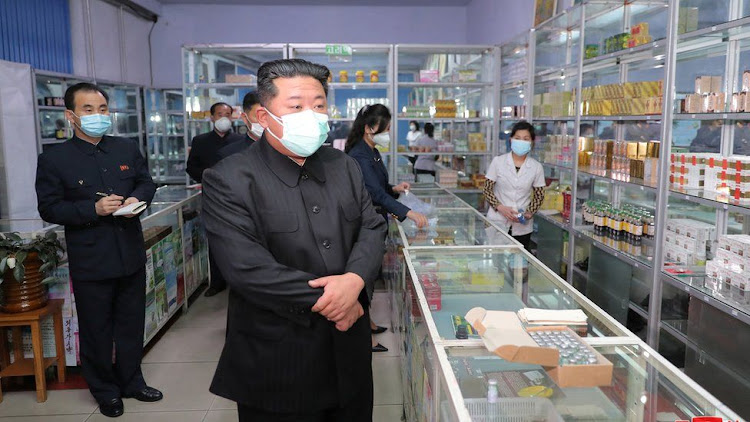 North Korean leader Kim Jong-un inspects a pharmacy in the capital Pyongyang in May
Image: KCNA

Citizens were urged to be vigilant around objects that may have blown across the border from the South.

For years activists in the South have flown balloons across the border to send leaflets and humanitarian aid.

In response, Seoul says there is "no possibility" Covid could have crossed the border in that way.

According to North Korea's state media, an official investigation found two people who became infected with Covid early on in the outbreak after coming into contact with unidentified materials near the South Korean border.

An 18-year-old soldier and five-year-old child tested positive for the virus in early April after finding the objects on a hill in Ipho-ri, it reported.

Since then, state media said: "The malignant Covid-19 virus...has rapidly spread in the DPRK [North Korea]."

As a result of the investigation, people in the country are instructed to "vigilantly deal with alien things coming by wind and other climate phenomena and balloons in the areas along the demarcation line and borders."

Anyone who notices a strange object is instructed to report it immediately so it can be swiftly removed by an emergency anti-epidemic team.

Although the report did not mention South Korea directly, Seoul's unification ministry strongly denied the North's explanation for how Covid could have got into the country.

The closed border between the Koreas is one of the most heavily guarded in the world, but defectors and South Korean activists have for years launched balloons across the divide with anti-North Korean messages.

Since late April North Korea has been battling an explosive wave of 4.7 million cases of "fever," believed to be untested Covid infections.

Kim Jong-un described the outbreak in May as the greatest "turmoil to fall on our country since the founding", state media reported.

Until this year the reclusive nation had claimed to be completely Covid-free - although some experts believe the virus may have been circulating before then.

Its population of 25 million is vulnerable due to the lack of a vaccination programme and poor healthcare system, although in recent weeks there have been media reports that Pyongyang has accepted an offer of Chinese-manufactured vaccines.

It's not clear how many North Koreans, if any, have so far been vaccinated.

In the last few weeks officials say the number of new cases has dropped dramatically but many suspect the government of under-reporting the true figures.

The outbreak began some months after the North eased a strict lockdown of its border with China - with freight trains resuming their journeys between the two countries for the first time since early 2020.

Any suggestion that the virus could have entered the country this way, especially as China was dealing with a severe outbreak of the Omicron variant, would have raised difficult and diplomatically sensitive questions, North Korea expert Professor Lim Eul-chul told Reuters news agency.

"If they concluded the virus was from China they would have had to tighten quarantine measures on the border area in a further setback to North Korea-China trade," he said.

North Korea: The mystery of its Covid outbreak

The country's leader, Kim Jong-un, has ordered quarantine measures be implemented,
News
1 month ago
WATCH: The latest news from around the World
by BBC NEWS None
World
02 July 2022 - 12:18