•The petition cited "irreconcilable differences" between the pair, six years after they married.

•The model and actress, 66, is claiming spousal support from the 91-year-old billionnaire, but is still seeking information about the full extent of his assets, the petition said. 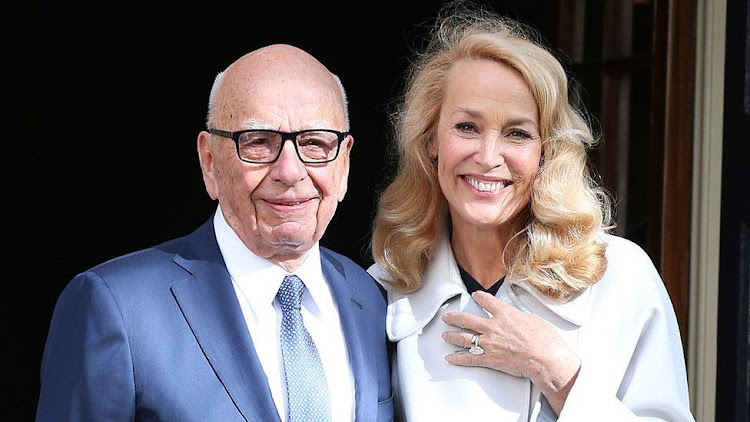 Rupert Murdoch and Jerry Hall at their London wedding in 2016

Jerry Hall has filed for divorce from media tycoon Rupert Murdoch in a court in the US state of California.

The petition cited "irreconcilable differences" between the pair, six years after they married.

The model and actress, 66, is claiming spousal support from the 91-year-old billionnaire, but is still seeking information about the full extent of his assets, the petition said.

Ms Hall was previously the partner of the Rolling Stones' Mick Jagger.

It will be the fourth divorce for Mr Murdoch. US media had said the split had come as a surprise to those close to the family.

Mr Murdoch - whose News Corporation empire controls major outlets including Fox News and the Wall Street Journal in the US, and The Sun and The Times in the UK - was previously said to have been devoting more time to his new wife.

At the time of his marriage, the billionaire announced on Twitter that he was "the luckiest AND happiest man in world", and that he would stop posting on the platform.

In 2018, his elder son Lachlan was named as his successor as chief executive of Fox Corp. Mr Murdoch also sold most of 21st Century Fox to the Walt Disney Company.

The couple had also been spotted together in public on several occasions.

Last year, Ms Hall was seen "doting on" her partner at his 90th birthday party, according to the New York Times.

The Texan model-turned-actress was previously in a long-term relationship with Mr Jagger, with whom she had four children. The pair tied the knot in a Hindu wedding ceremony in Bali, Indonesia, in 1990. The marriage was annulled less than a decade later in London's High Court of Justice, which ruled that the marriage had never been legal under British or Indonesian law.

Mr Murdoch was previously married to Australian flight attendant Patricia Booker, from 1956 to 1967; Scottish-born journalist Anna Mann, from 1967 to 1999; and Chinese-born entrepreneur Wendi Deng, from 1999 to 2014.

Across their marriages, the pair have 10 children.