Russia has also fired more missiles at cities in the north and south.

•It is the last Ukrainian-held city in Luhansk, part of the industrial Donbas region. Russia captured the nearby city of Severodonetsk last month.

•"We barely have time to put out the major fires in Lysychansk," Luhansk governor Serhiy Haidai said. 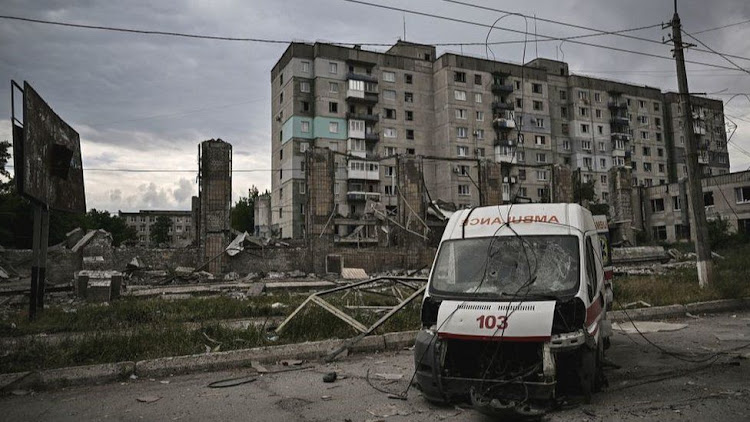 Heavy fighting has devastated much of Lysychansk (18 Jun 22 pic)

Ukraine says its forces are enduring intense Russian shelling in the eastern city of Lysychansk, but denies claims that they are surrounded.

It is the last Ukrainian-held city in Luhansk, part of the industrial Donbas region. Russia captured the nearby city of Severodonetsk last month.

"We barely have time to put out the major fires in Lysychansk," Luhansk governor Serhiy Haidai said.

Russia has also fired more missiles at cities in the north and south.

Railway tracks and electricity lines in the northern city of Kharkiv were damaged in a series of attacks. No casualties were reported.

The southern city of Mykolaiv - on a key route to the port city of Odesa - was shaken by several explosions.

The Russian defence ministry said its air force had destroyed five Ukrainian command posts and several ammunition dumps, but that claim has not been independently verified.

The blasts came a day after the Russians killed more than 20 people in a missile strike on a block of flats near Odesa.

Later on Saturday Belarus President Alexander Lukashenko said his country's air defences had shot down Ukrainian missiles, though he did not specify where. He is a close ally of Russia's Vladimir Putin and allowed Russian troops to invade Ukraine from Belarus in February.

"They are provoking us... Three days ago, maybe a bit more, an attempt to strike military facilities on Belarusian territory was made from the territory of Ukraine," he said. "But, thank God, the Pantsir anti-aircraft systems managed to intercept all the missiles."

He added that "we are not seeking to fight in Ukraine".

Russia is concentrating its ground offensive in the Donbas, and Governor Haidai said artillery fire was striking Lysychansk from several directions.

But a Ukraine National Guard spokesman denied claims by Russian-backed Luhansk separatists that they had encircled the city.

Russian sources have tweeted video of the Soviet flag allegedly being placed at a war memorial in Lysychansk, but that has not been verified.

The Russian-backed Luhansk separatists claimed they had "occupied the last strategic heights, which allows us to confirm that Lysychansk is completely encircled".

It also accuses Russia of using Soviet-era anti-ship missiles "in a secondary land attack role" - not what they were designed for. The Kh-22 and Kh-32 missiles were "likely" the ones that killed many civilians in Kremenchuk and Odesa, the ministry says.

Slovyansk, a major Donbas city held by Ukrainian forces, has also been shelled again by the Russians. Its mayor Vadym Lyakh said banned Russian cluster munitions killed four people there - another claim the BBC was unable to verify.