Russian gas firm Gazprom to cut some supply to Shell

Shell said it would continue to get gas from its other sources.

•Gazprom said it would halt gas to Denmark's Orsted and to Shell for its contract to supply gas to Germany after both refused to make payments in roubles, Reuters reported.

•Shell told the BBC it would continue to get gas from its other sources. Shell has said it will work to keep gas flowing to its customers in Europe after Russian energy firm Gazprom said it would cut supplies from tomorrow.

Gazprom said it would halt gas to Denmark's Orsted and to Shell for its contract to supply gas to Germany after both refused to make payments in roubles, Reuters reported.

Shell told the BBC it would continue to get gas from its other sources.

The gas giant said it would continue to phase out Russian fossil fuels.

The move by Gazprom comes after European Union leaders said they will block most Russian oil imports by the end of 2022 to punish Moscow for invading Ukraine.

In response to Western sanctions, Russia has already cut off gas supplies to Poland, Bulgaria, Finland and the Netherlands, after the countries refused to comply with Russian demands to switch to payment in roubles.

The latest move expands that retaliation to Germany and Denmark.

Vladimir Putin's decree has been seen as an attempt to boost the Russian currency, which has been hit by sanctions, as more foreign exchange demand for roubles is likely to increase demand and push up its value.

Shell told the BBC it had not agreed to "new payment terms set out by Gazprom", which included the creation of Russian bank accounts.

"We will work to continue supplying our customers in Europe through our diverse portfolio of gas supply," a spokesman said.

"Shell continues to work on a phased withdrawal from Russian hydrocarbons, in compliance with applicable laws and regulations."

Shell has taken a hit of $5bn (£3.8bn) from offloading its Russian assets as part of its plans to withdraw sever ties with the country. It also confirmed it had quit its joint ventures with Gazprom.

The firm pledged in April to no longer buy oil from Russia, but said contracts signed before the invasion of Ukraine would be fulfilled.

Shell was criticised when it bought Russian crude oil at a cheap price shortly after the war began.

The war in Ukraine has pushed countries in the West to phase out Russian energy supplies.

Europe gets about 40% of its natural gas from Russia, which is also the bloc's main oil supplier, but some countries are more dependent Russian fossil fuels than others, so sudden supply cuts could have huge economic impact.

Nathan Piper, head of oil and gas research at Investec, said it was "clear" that European countries and companies was want to reduce imports of Russian fossil fuels.

However he warned of the "ongoing risk that efforts to reduce Russian oil and gas imports results in higher oil and gas prices" = limiting the impact on Russia.

"Russian volumes may gradually be reduced but they are 'compensated' by higher overall prices," he added.

He said the geopolitical tensions were set against "an already tight oil and gas market prior to the invasion of Ukraine". 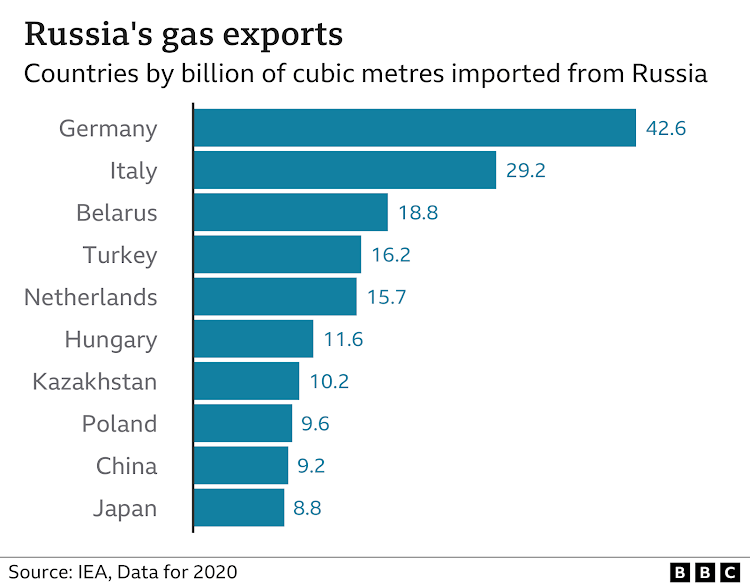 Countries have been filling gas storage sites ahead of winter due to the threats of Russian supply cuts.

So far, no sanctions on Russian gas exports to the EU have been put in place, although plans to open a new gas pipeline from Russia to Germany have been frozen.

Meanwhile the EU leaders have agreed an immediate ban on Russian oil being transported into the bloc by sea.

In late March, Russia said "unfriendly countries" would have to start paying for its oil and gas in roubles after Western allies froze billions of dollars it held in foreign currencies overseas.

Under the decree, European importers must pay euros or dollars into an account at Gazprombank, the Swiss-based trading arm of Gazprom, and then convert this into roubles in a second account in Russia.

The majority - 97% - of EU companies' gas supply contracts with Gazprom stipulate payment in euros or dollars.