Russia earlier said a deal had been reached to evacuate the injured troops.

• She said another 211 were evacuated using a humanitarian corridor to Olenivka - another rebel-held town. 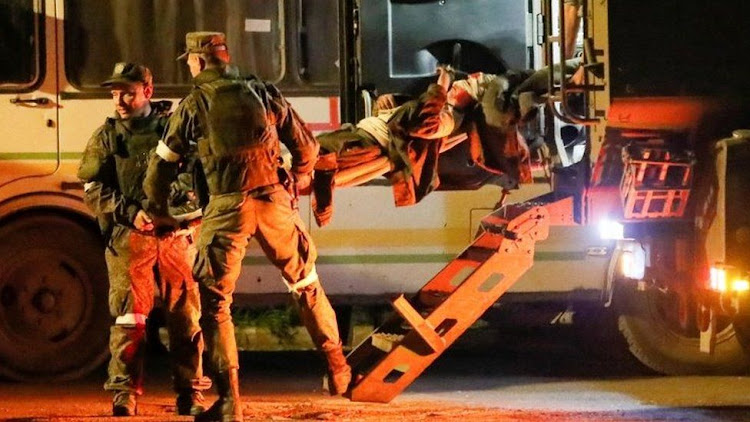 Ukraine has confirmed that hundreds of its fighters trapped for more than two months in Mariupol's Azovstal steelworks have been evacuated.

She said another 211 were evacuated using a humanitarian corridor to Olenivka - another rebel-held town.

Russia earlier said a deal had been reached to evacuate the injured troops.

About a dozen buses carrying Ukrainian fighters who were holed up beneath the besieged plant were seen leaving the huge industrial site in the southern port city on Monday evening, Reuters news agency reported.

Russian state-run media outlets also posted footage of what they say were injured Ukrainian soldiers being evacuated from Azovstal.

Ms Maliar said the troops would be exchanged for captured Russian soldiers.

In his video address after midnight local time on Tuesday, Ukrainian President Volodymyr Zelensky said that Ukrainian military, intelligence and negotiating teams, as well as the Red Cross and the UN were involved in the evacuation operation.

However, he cautioned that the Ukrainian troops may not be freed immediately and warned that negotiations over their release will require "delicacy and time".

Hundreds of Ukrainian soldiers - the Azov regiment, the National Guard, police and territorial defence units - as well as a number of civilians have been holed up at the site since advancing Russian troops encircled the southern city in early March.

The sprawling four-square mile complex is a maze of tunnels designed to survive a nuclear war.

It was not immediately clear how many people still remain in underground bunkers.

Ms Maliar said Ukraine's military, intelligence, National Guard and Border Service were "carrying out joint efforts to save" those left behind.

She also hailed the actions of the plant's defenders, who she said had "fully accomplished all missions assigned by the command". But she noted that their position had become untenable after it became "impossible to unblock Azovstal by military means".

In a message posted to Facebook on Monday night, Ukraine's General Staff called the troops "heroes of our time" and said their efforts had helped Kyiv organise the defence of its southern flank.

"Maintaining their positions at Azovstal, they did not allow the opponent to shift the grouping of up to 17 battalion tactical groups (about 20,000 personnel) to other directions. Thereby hindered the implementation of the plan for the rapid capture of Zaporizhzhia," military chiefs said in the post.

Meanwhile, the Azov regiment, a National Guard unit which once had strong links to the far right, appeared to confirm that its fighters had agreed in a social media post to lay down their arms.

The group's commander, Lt Col Denis Prokopenko said his priority was saving the lives of "as many lives of personnel as possible".