It's the highest official total in the world - although the World Health Organization believes the true death toll may be much higher elsewhere.

•It's the highest official total in the world - although the World Health Organization believes the true death toll may be much higher elsewhere. 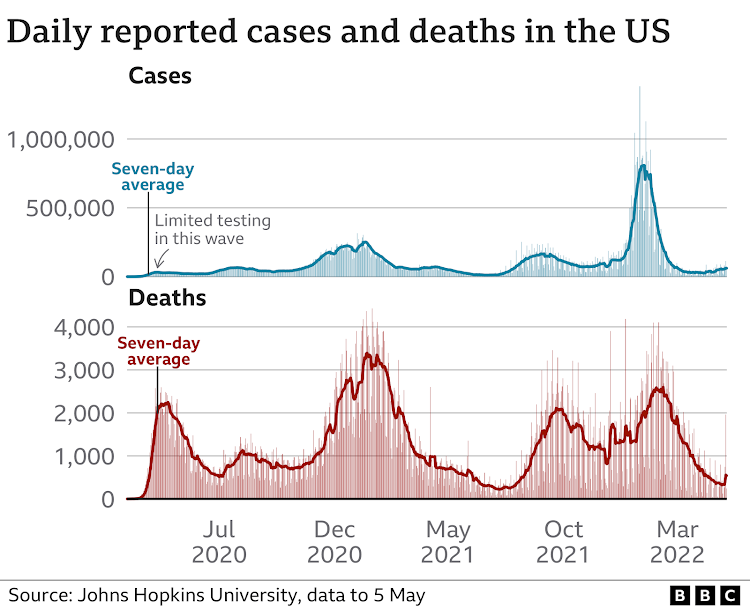 The US has passed more than one million Covid-related deaths, says the White House.

President Joe Biden said the country was marking "a tragic milestone" and each death was "an irreplaceable loss".

It's the highest official total in the world - although the World Health Organization believes the true death toll may be much higher elsewhere.

The US has also recorded more than 80 million Covid cases, out of a 330 million population.

The first confirmed case was reported on 20 January 2020, when a man flew home to Seattle from Wuhan in China.

The 35-year-old survived, after 10 days of pneumonia, coughs, fever, nausea and vomiting. But deaths began to be reported just a few weeks later.

In the two years since, death rates have ebbed and flowed as waves of the virus swept across the country - reaching highs of more than 4,000 a day in early 2021.

Public health experts give several reasons for the high US death toll - including high rates of obesity and hypertension, overworked hospital systems, some vaccine hesitancy and a large older population.

Each US state may have a slightly different way to define a Covid death, and such deaths are often not solely because of the virus.

When did the deaths take place?

The US has seen the number of daily reported deaths spike on several occasions, often coming as new variants spread across the country.

The first wave - the initial pandemic - saw highs of more than 2,500 daily reported deaths in April 2020, about eight months before the first vaccines were rolled out in December.

"The dangerous surges, where our hospitals were full and new deaths were overwhelming, have all come on the heels of new variants," Dr Mark Cameron, an associate professor in the department of population and quantitative health sciences at Case Western University in Ohio, told the BBC.

Most of the one million Americans who died during the pandemic lost their lives after the vaccines were introduced. That's down to the sheer scale of people still catching the virus - it does not mean the vaccines aren't working. Vaccines massively cut severe Covid risk.

A study from the Rand Corporation credited the jabs with saving 140,000 lives in the US by May 2021 alone.

A separate analysis by the Peterson Center for Healthcare and the Kaiser Family Foundation in April this year estimated that around a quarter of the US deaths - about 234,000 people - could have been prevented with vaccines.

"You can't necessarily simplify this to be a pandemic of the unvaccinated. Everyone knows someone who had the whole vaccination regimen and still got very sick," Dr Cameron added.

"But the data is clear, the risk of Covid-19 and death is higher in the unvaccinated."

Where in the US did the deaths take place?

Of the 50 US states, the highest death toll has been reported in California, where about 90,000 people have died.

The per capita death rate in these states far surpasses the average US national rate of about 300 per 100,000.

Brittany Kmush, an epidemiologist and global health expert at Syracuse University, said socio-economic status often affected "being able to access hospitals with oxygen and things like that when patients need them".

In her analysis, shortcomings in vaccinations have contributed more to the US death toll than other public health measures, such as masking or isolation.

While deaths have been reported across all age and ethnic groups, experts note that certain sectors of the population have been more likely to die - particularly the elderly and those with co-morbidities.

Government data shows the vast majority of Covid deaths in the US - about 740,000 - have been among those older than 65.

"Looking at severe illness and death, the demographics haven't changed throughout the pandemic. It has always been older adults, and those with co-morbidities especially," Dr Cameron explained.

CDC data analysed by the Kaiser Family Foundation shows that overall - particularly in the early stages of the pandemic in 2020 - black, Hispanic and Native American populations experienced higher rates of both infection and death.

Public health experts cite a range of reasons, including vaccine hesitancy among some groups, and an elevated risk of exposure due to working and living conditions.

"Part of that is being unable to separate yourself from work," Dr Gandhi said.

"And even after the vaccine, there was some scepticism in some of our black and Hispanic populations about taking up the vaccine. But there was a lot more acceptance after Delta. That really scared people."

While the death toll from Covid-19 now officially exceeds one million, the indirect toll of the virus is likely to be far higher, as a result of disrupted health systems and a hesitancy to seek medical attention for fear of catching the virus.

One study, published in the journal PLOS Medicine in May 2021, found that for every 100 deaths directly assigned to Covid, another 20 "excess" deaths occurred that were not - many of them in areas with "lower socio-economic status".

A study released on Thursday by the World Health Organization put the figure at 140 excess deaths per 100,000 people during 2020 and 2021 - totalling about 930,000 more lives lost than would have been expected on average.

"People were waiting for surgery and not seeing their doctors, and [there were] missed opportunities for serious disease diagnoses," Dr Cameron said, adding that this was particularly true for those aged between 25 and 64.

"It will be years before we even come close to understanding the impact Covid-19 had on our overall morbidity and mortality rates."

The move is in line with changing Covid policies on public transport across Europe.
News
1 week ago

Toyota cuts production due to Covid lockdown in Shanghai

It is the latest big car maker to announce that it is being impacted by the Covid-19 measures in China.
Sasa
2 weeks ago

Toyota cuts production due to Covid lockdown in Shanghai

It is the latest big car maker to announce that it is being impacted by the Covid-19 measures in China.
News
2 weeks ago
WATCH: The latest videos from the Star
by BBC NEWS None
World
12 May 2022 - 15:23