Ukraine says its forces have recaptured villages from Russian troops.

•The village of Ruska Lozova stands at the centre of the turn in Ukraine's response to Russian aggression.

•It was recently liberated in a coordinated effort led by senior military commanders. 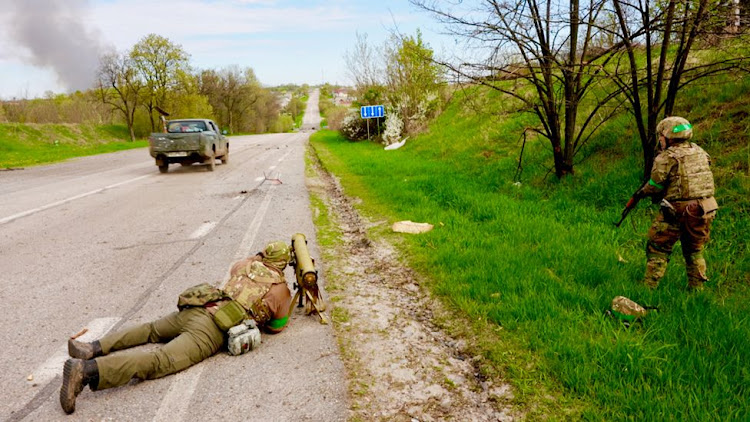 Ukraine says its forces have recaptured villages from Russian troops north and north-east of Kharkiv, pushing them back towards the border. The ongoing offensive could signal a shift in the war's momentum and jeopardise Russia's main advance further south.

BBC correspondent Quentin Sommerville, and cameraman Darren Conway, have been with Ukrainian forces as they advance.

The village of Ruska Lozova stands at the centre of the turn in Ukraine's response to Russian aggression.

It was recently liberated in a coordinated effort led by senior military commanders. Ukrainian troops from territorial defence, the national guard, and the regular army are seeking to push the Russians back along a 32km (20 mile) front line. In the Russian city of Belgorod, just across the border, troops have amassed for a likely counter-offensive.

We drove north from the city of Kharkhiv with Ukrainian forces. Russian shells continued to hit the village.

With no power or water, little food, and neither phone or internet, its residents had been isolated from Ukraine's second-largest city - just 8km (5 miles) south. From the woods and hills nearby, Russian mortars and artillery shelled Kharkiv relentlessly.

At an army aid station, we met Raisa Opanasivna who has lived in Ruska Lozova for 30 years. The 66-year-old approached the Ukrainian soldiers, weighed down by history, and two large plastic shopping bags.

Under a knitted grey beanie, her gaunt face was weather-beaten, her slim frame stooped. She hadn't seen this many people for months. Since the beginning of the war, her village had been under Russian occupation.

The Russians had come house to house. "They were checking homes, asking if we have rifles. But I have nothing. I'm alone," Raisa said.

Ruska Lozova has been torn apart, but more than that, Raisa's whole world had been upended by Russia's invasion. In the east, the war is bringing not just a re-examination of people's relationship to Russia - barely 30km north - but a more personal reassessment of what it means to be a Russian-speaking Ukrainian.

A month ago, the Russians were literally at the gates to Kharkiv. The shelling was constant - and buildings in the street we were staying in were being hit. It became so bad that it was easier to count the hours of silence than the hours of explosions. It felt like being on the edge of an abyss, where one more concerted Russian attack could rupture the city.

In the northern Saltivka neighbourhood, entire apartment blocks had been destroyed. Those who had stayed behind had no electricity or water, and were reduced to cooking food on small fires they had made in their stairwells.

But the spectre of Russian victory, which haunted this city, has gone. Last week I sat in a city centre park, its grass neatly cut, its flower beds blooming, and enjoyed an ice cream sundae from a cafe. The city is still largely empty, but the number of Russian artillery strikes has fallen from dozens daily, to only a handful. Air raid sirens still wail regularly, but Kharkiv no longer feels on the brink of catastrophe.

Ukrainian gains, modest for now, could have strategic implications for Russia's war in the Donbas to the south-east, threatening the invaders' supply lines.

As we headed north from Kharkiv with Ukrainian forces to villages and towns that mark the new frontline - the road remained strewn with craters and spent Russian rockets. At the highway's edges there were destroyed Russian vehicles and burned-out lorries, which had been used to block their initial attack on Kharkiv.

We drove at speed - the commander of a volunteer unit behind the wheel, had his rifle propped in the footwell. "The sides of the road are mined," he said, as the car lurched through a chicane of roadblocks and tank traps.

Ours was the only car on the road, and we were aware that, on the forested hill in front of us, Russian tanks and artillery were still roaming.

War in the Kharkiv region has changed - it's now a game of hawk and mouse, where each side's drones circle constantly, trying to pinpoint the enemy's tanks and guns, for targeting by artillery.

We passed a Russian Grad rocket launcher lying in a ditch, and a smashed-up military green Lada, with the Russian "Z" insignia painted white on its doors.

"Russia's secret weapon," the commander said, to laughter among his men.

Near Ruska Lozova, scorch marks on the road were all that remained of a civilian vehicle destroyed by a Russian shell. The wreck was gone, but its contents were spilled across the road - a pink blanket here, some clothing there. A number of people were killed in the strike.

The village shows the effects of the battle for control. Homes have been wrecked by shelling and some buildings still burn. One house we passed had a shattered roof, while bright red tulips lined up in an orderly fashion at its gate.

The battle has become more fluid, and the men don't linger in the open. They run across open ground at speed and climb walls to avoid Russian fire from the woods, less than half a kilometre away. 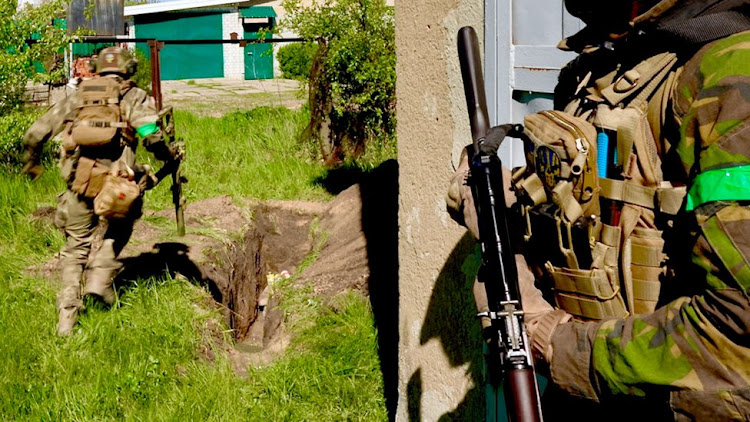 Ukrainian troops are reluctant to linger in the open

They believe Russian fighters have left, and it's mostly men from the separatist Donbas region they are fighting. But the day after we left, more Russians were captured near the front.

We had to take cover suddenly in a foxhole, their first line against the enemy as the Russian artillery again opened fire and shells whizzed overhead. They landed on the other side of the village seconds later.

At an anti-tank position, US-supplied Javelin anti-tank missiles, along with their British-supplied versions, lay ready for use. Manning this lookout were two volunteers, who replied to me in French. They are Ukrainian, but joined the French Foreign Legion. One told me that he'd been serving for three years, but had deserted to join the fight for Ukraine.

That is perhaps a weapon Russia underestimated - the force of Ukrainian solidarity. Even before Western military aid began arriving here, this was what anchored Ukraine's defences. Among the group of volunteers are an economist, a businessman, a mechanic, and a rally-driving champion. 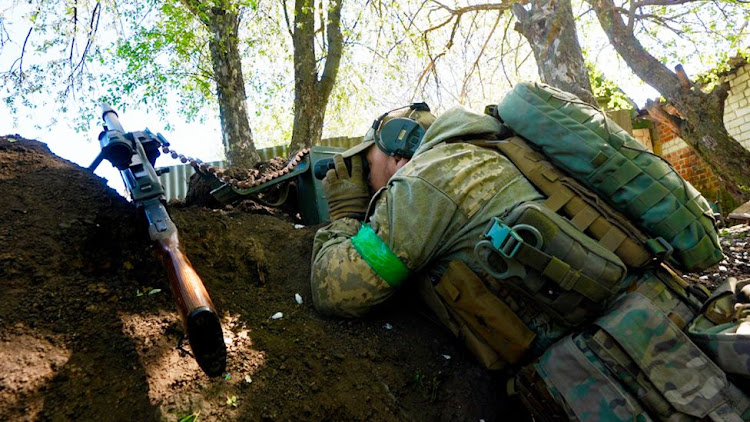 Taking cover in a foxhole

I met the commander before Victory Day on 9 May - which Russia and Ukraine celebrate as the Soviet Union's defeat over Germany's Nazi regime during World War Two - and asked him what it meant this year. He feels it has been tainted.

"I was born in the Soviet Union," he continues, sipping on some freshly brewed tea. "Russians, to my regret, use everything as weapons. Our common dates, our common language, our common religion. Russia doesn't hesitate to use all means. That is why everybody here now hates the Russian language - even Russian poet Alexander Pushkin is persona non grata - that is why our church is split, and everything which is Russian will be renamed here."

Few people remain in the town of Ruska Losova. Raisa, in her grey coat and woollen hat approached army medics, numb to the shelling around her, and the wounds it had inflicted upon on her body. Her face was peppered with shrapnel and half of her finger was missing.

When she removed her jacket, her slim arm was sliced open at the bicep.

"Cut like a chicken fillet. Can you remove the shrapnel?" Raisa asks.

Perhaps it was because she hadn't seen people for months, or because of a stroke last year, but she has only just regained the ability to talk.

Her story began to pour out. A group of soldiers gathered around her.

"When I was giving birth there were three of us mothers. I was in the middle. They were screaming. I was calm. I took a strap from the shirt to my mouth. The doctor told me to scream. But I said it doesn't matter if you are screaming or not. It's still painful. That's how I gave birth to my son. Quietly."

The men around her were wincing as she told them to cut off the loose skin with scissors. One soldier looked queasy as the medic patched her up. As it was happening, she reflected on the fate of her village and of an empire she had seen disintegrate - her home and her history in ruins.

She lived through the Soviet Union at a time when Russia and Ukraine were countries intertwined. For years, she lived in East Germany, where she became pregnant, and returned to Ukraine to give birth alone.

"My father and [Putin's] father were fighting together against Hitler, right? Could that really be possible? And now we fight against each other," she told us. "[We were] the closest nations. This has never happened before. There were German invaders and now these are our people."

After being bandaged up, Raisa was escorted to a waiting car, to take her to hospital in Kharkiv. 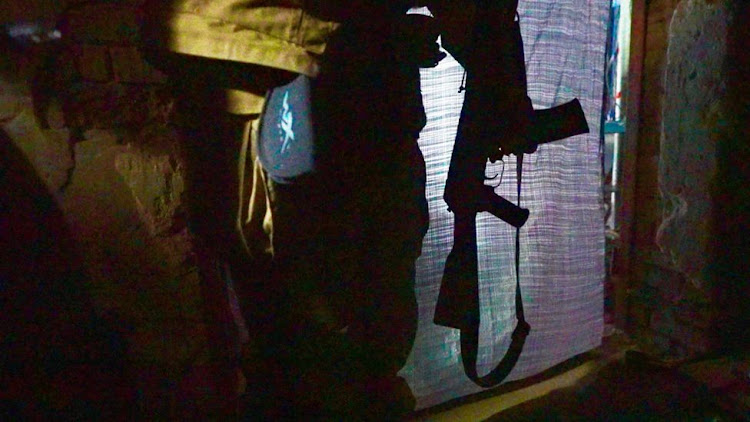 Most of the people in the village are being evacuated, buses waiting to transport those without cars.

The Russian occupation has torn the village apart, both literally and figuratively. In the basement of one building, half a dozen locals have been detained. They are suspected of aiding the enemy. Their eyes are covered with balaclavas taped over their heads, their hands tied. At least one woman is among them. They are left alone in a room, then taken away to the security services for questioning.

Their phones will be checked and their social media, too. Police checkpoints on the road into Kharkiv question everyone coming from the liberated areas, looking for saboteurs. Collaborators face 15 years in prison, or a life imprisonment if their actions caused Ukrainian deaths.

It's unlikely Raisa can ever forgive Russia for the wounds she has suffered. And with every battle, the men on the front line are freeing themselves from the bindings that once held these two nations together.

But the operation north of Kharkiv isn't complete and it has been costly. It is only one front in what looks as though it will be a long war.