The Food and Drugs Administration warned vendors to stop selling it as a COVID-19 treatment.

•China approved several treatments including Pfizer Inc's Paxlovid and Brii Biosciences Ltd's antibody-based medicine to treat COVID-19 patients, but it is not clear how widely they are used.

•The Food and Drugs Administration warned vendors to stop selling it as a COVID-19 treatment. 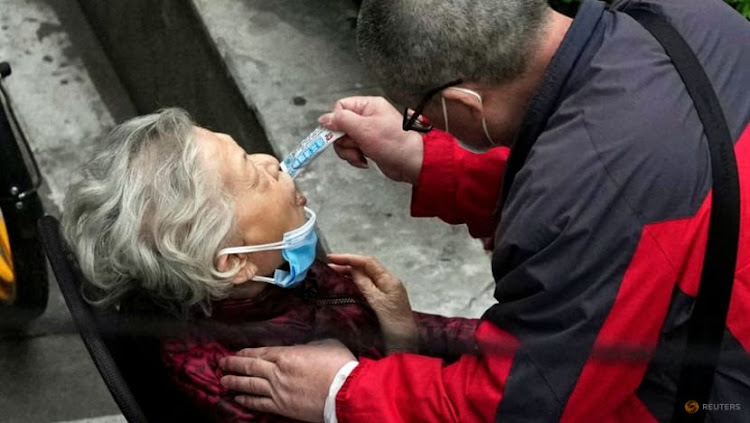 A man helps a woman to consume a packet of traditional Chinese medicine (TCM) Lianhua Qingwen, as she sits by the side of a road outside a residential compound, during a lockdown to curb the spread of the coronavirus disease (COVID-19) in Shanghai, China April 5, 2022.
Image: REUTERS

Shanghai is distributing to residents millions of boxes of traditional Chinese medicine (TCM), such as herbal products and flu capsules, which it says can treat COVID-19 in the battle to control its largest virus outbreak.

China's commercial capital, now under an extended lockdown, reported more than 17,000 new COVID-19 infections on Wednesday (Apr 5), including 311 symptomatic cases, among a population of more than 26 million.

"Facing the extremely transmissible Omicron variant, we should use TCM treatment as soon as possible," said Fang Min, president of the city's Shuguang Hospital.

"For the general public, including high-risk groups, taking TCM treatment when the epidemic is severe has a good preventive effect," he told a news briefing on Tuesday, adding that such treatments for more than 21 million people had been handed out.

Several residents told Reuters they had received free boxes of over-the-counter flu medicine Lianhua Qingwen from neighborhood committees in recent weeks. Others who caught COVID-19 said they got TCM medication to be dissolved in hot water.

About 98 per cent of Shanghai's COVID-19 patients are taking TCM treatment, and teams of TCM workers have fanned out to designated hospitals and quarantine sites since the latest outbreak began in March, Fang said.

China's health authority has recommended several TCM drugs and ingredients, such as Lianhua Qingwen, for use by COVID-19 patients, although a lack of reliable clinical data limits their use outside the country.

Singapore, which has a large ethnic Chinese population, said in November there was no scientific evidence from randomized clinical trials that any herbal product, including Lianhua Qingwen, could be used to prevent or treat COVID-19.

It advised the use of all herbal products formulated for the common cold and flu only to manage symptoms such as headaches, runny or blocked noses, sore throats, and coughs.

In 2020, the US regulator the Food and Drugs Administration warned vendors of Lianhua Qingwen to stop selling it as a COVID-19 treatment.

Officials in Shanghai's district of Hongkou have distributed 722,000 boxes of Lianhua Qingwen capsules, and aim to give all residents preventive TCM medicines such as herbs and tea bags, said the Shanghai Daily, which is owned by the local government.

Shijiazhuang Yiling Pharmaceutical, the maker of Lianhua Qingwen, has said a 2020 clinical trial showed that it could, along with conventional therapy, relieve COVID-19 symptoms such as fever and cough.

China approved several treatments including Pfizer Inc's Paxlovid and Brii Biosciences Ltd's antibody-based medicine to treat COVID-19 patients, but it is not clear how widely they are used.

This comes as developing nations struggle to allocate supplies.
News
2 months ago

Protection against infection dwindled after four weeks.
Health
2 months ago

Beijing and Moscow have developed close ties, including forming a "no limits" partnership in February.
News
2 months ago
by REUTERS Reuters
World
07 April 2022 - 10:03