Paul Muite to Ruto: We'll invite you to government if Wanjigi wins presidency

• Muite said they will invite UDA to form the government if Wanjigi wins the presidency.

• He said that if the Safina Party presidential aspirant Jimi Wanjigi wins the August polls, they will welcome the UDA to be part of the next government. 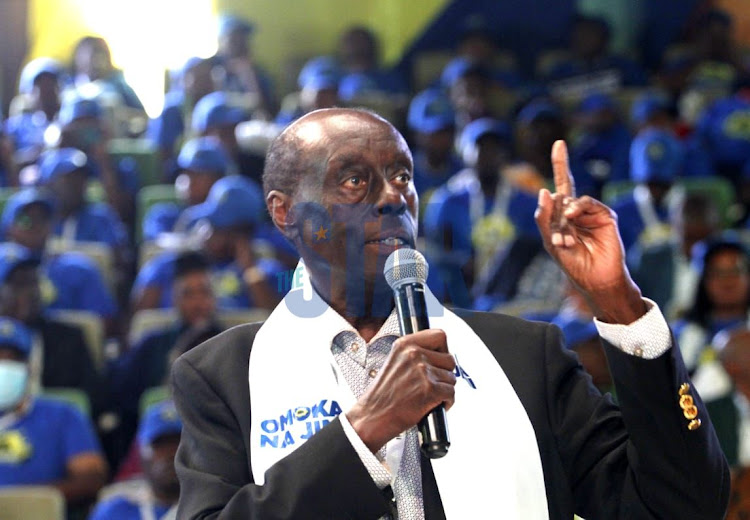 Safina Party leader Senior Counsel Paul Muite has said the third liberation for the country will be about the economy and the social life of Kenyans.

Addressing over 2,000 delegates of the party during its NDC on Monday at the Bomas of Kenya, Muite said his party shares similar agenda for the country with that of Deputy President William Ruto.

The NDC was convened to endorse businessman Jimi Wanjigi for the presidency.

“For those of you who are wondering why Safina is aligned economically, socially with UDA, it is because the vision that UDA has for this country is identical to that of Safina. That is as far as social, economy and policy are concerned,” Muite said.

He pledged to incorporate Ruto's UDA in their next government in the event Wanjigi wins the presidency.

This loosely translates to: "Because God’s plans are many, if you also win, do invite us also to your government".

Ruto and some of his Kenya Kwanza Alliance leaders attended the Safina event, including former Bomet governor Isaac Ruto.

Wanjigi had earlier stated that he has not given up on being Kenya’s next president and he will do that under the Safina party.

Wanjigi claimed that his exit from the ODM party was due to the violence subjected to him during the party’s NDC at Kasarani stadium.

The businessman ditched ODM and joined Safina two weeks ago.
News
2 months ago

Over 2,000 delegates expected to attend the event.
News
2 months ago
WATCH: The latest videos from the Star
by KEVIN CHERUIYOT Online Journalist
World
21 March 2022 - 16:16