Why is Russia invading Ukraine and what does Putin want?

It is now clear that Russia is seeking to overthrow Ukraine's democratically elected government.

•What Russia's plans are for Ukraine are unknown, but it faces stiff resistance from a deeply hostile population.

•It is now clear that Russia is seeking to overthrow Ukraine's democratically elected government. 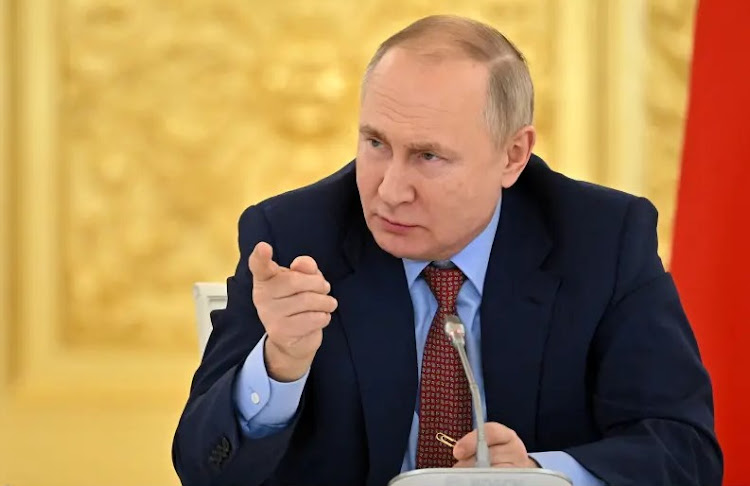 For months, President Vladimir Putin denied he would invade his neighbour, but then he tore up a peace deal, sending forces across borders in Ukraine's north, east and south.

As the number of dead climbs, he stands accused of shattering peace in Europe. What happens next could jeopardise the continent's entire security structure.

Why have Russian troops attacked?

Russian troops are advancing on Ukraine's capital from several directions after Russia's leader ordered the invasion. In a pre-dawn TV address on 24 February, he declared Russia could could not feel "safe, develop and exist" because of what he claimed was a constant threat from modern Ukraine.

Airports and military headquarters were hit first, near cities across Ukraine, then tanks and troops rolled into Ukraine from the north, east and south - from Russia and its ally Belarus.

Many of President Putin's arguments were false or irrational. He claimed his goal was to protect people subjected to bullying and genocide and aim for the "demilitarization and de-Nazification" of Ukraine. There has been no genocide in Ukraine: it is a vibrant democracy, led by a president who is Jewish.

"How could I be a Nazi?" said Volodymr Zelensky, who likened Russia's onslaught to Nazi Germany's invasion in World War Two. 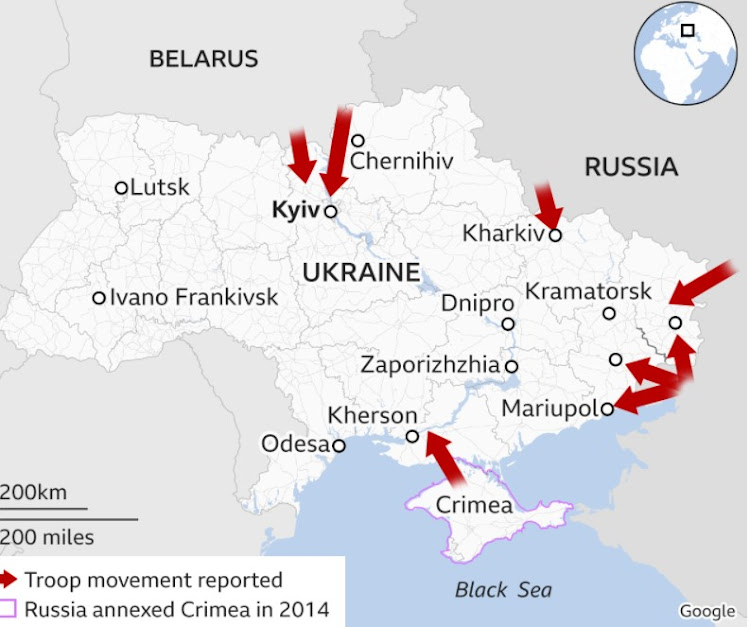 President Putin has frequently accused Ukraine of being taken over by extremists, ever since its pro-Russian president, Viktor Yanukovych, was ousted in 2014 after months of protests against his rule.

Russia then retaliated by seizing the southern region of Crimea and triggering a rebellion in the east, backing separatists who have fought Ukrainian forces in a war that has claimed 14,000 lives.

Late in 2021, Russia began deploying big numbers of troops close to Ukraine's borders, while repeatedly denying it was going to attack. Then Mr. Putin scrapped a 2015 peace deal for the east and recognised areas under rebel control as independent.

Russia has long resisted Ukraine's move towards the European Union and the West's defensive military alliance, NATO. Announcing Russia's invasion, he accused NATO of threatening "our historic future as a nation".

How far will Russia go?

It is now clear that Russia is seeking to overthrow Ukraine's democratically elected government. Its aim is that Ukraine be freed from oppression and "cleansed of the Nazis".

This false narrative of a Ukraine seized by fascists in 2014 has been spun regularly on Kremlin-controlled TV. Mr Putin has spoken of bringing to court "those who committed numerous bloody crimes against civilians".

What Russia's plans are for Ukraine are unknown, but it faces stiff resistance from a deeply hostile population.

In January, the UK accused Moscow of plotting to install a pro-Moscow puppet to lead Ukraine's government - a claim rejected at the time by Russia as nonsense. One unconfirmed intelligence report suggested Russia aimed to split the country in two.

In the days before the invasion, when up to 200,000 troops were near Ukraine's borders, Russia's public focus was purely on the eastern areas of Luhansk and Donetsk.

By recognising the separatist areas controlled by Russian proxies as independent, Mr. Putin was telling the world they were no longer part of Ukraine. Then he revealed that he supported their claims to far more Ukrainian territory.

The self-styled people's republics cover little more than a third of the whole of Ukraine's Luhansk and Donetsk regions, but the rebels covet the rest, too. 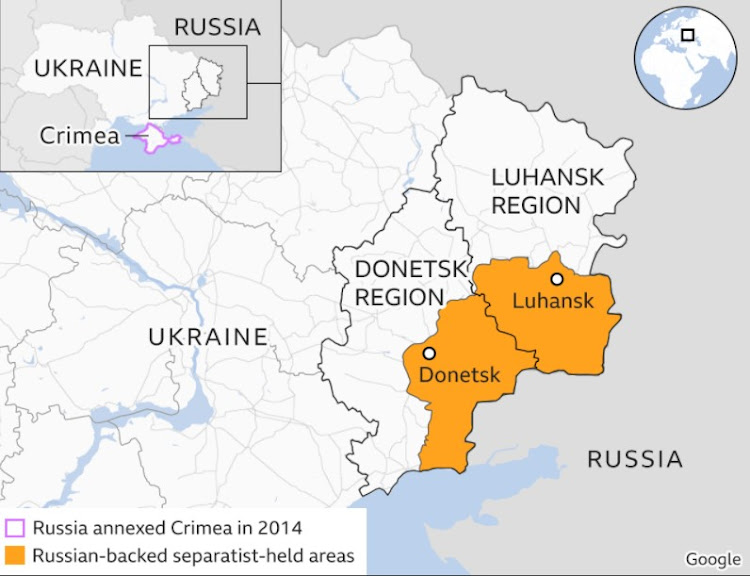 What does Putin want?

President Putin partly blamed his decision to attack on NATO's eastward expansion. He earlier complained Russia had "nowhere further to retreat to - do they think we'll just sit idly by?"

Ukraine is seeking a clear timeline to join NATO and Russia's Deputy Foreign Minister Sergei Ryabkov explained: "For us it's absolutely mandatory to ensure Ukraine never, ever becomes a member of NATO."

Last year, President Putin wrote a long piece describing Russians and Ukrainians as "one nation", and he has described the collapse of the Soviet Union in December 1991 as the "disintegration of historical Russia".

He has claimed modern Ukraine was entirely created by communist Russia and is now a puppet state, controlled by the West.

President Putin has also argued that if Ukraine joined Nato, the alliance might try to recapture Crimea.

But Russia is not just focused on Ukraine. It demands that Nato return to its pre-1997 borders.

Mr Putin wants Nato to remove its forces and military infrastructure from member states that joined the alliance from 1997 and not to deploy "strike weapons near Russia's borders". That means Central Europe, Eastern Europe and the Baltics.

In President Putin's eyes, the West promised back in 1990 that Nato would expand "not an inch to the east", but did so anyway.

That was before the collapse of the Soviet Union, however, so the promise made to then Soviet President Mikhail Gorbachev only referred to East Germany in the context of a reunified Germany. Mr Gorbachev said later "the topic of Nato expansion was never discussed" at the time. 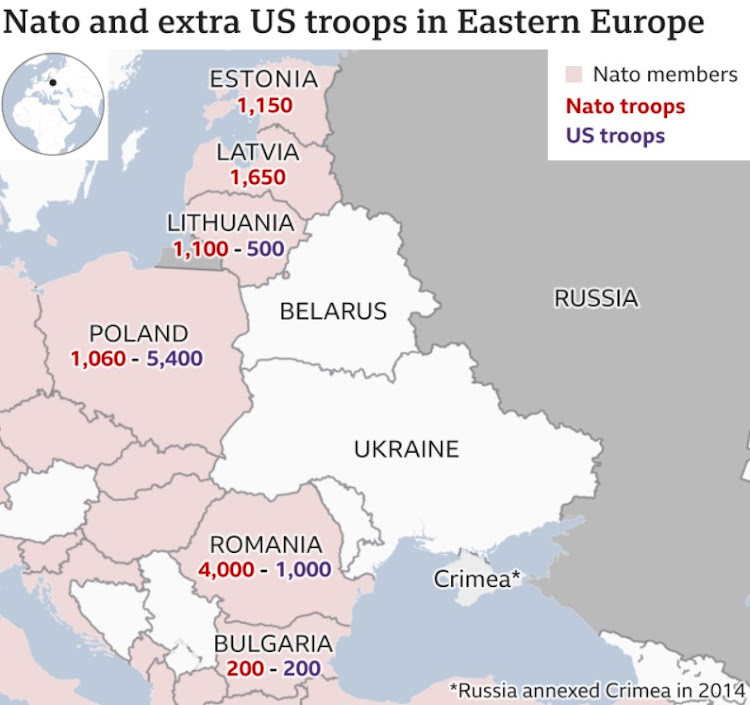 What has Nato said?

Nato is a defensive alliance with an open-door policy to new members, and its 30 member states are adamant that will not change.

There is no prospect of Ukraine joining for a long time, as Germany's chancellor has made clear.

But the idea that any current Nato country would give up its membership is a non-starter. 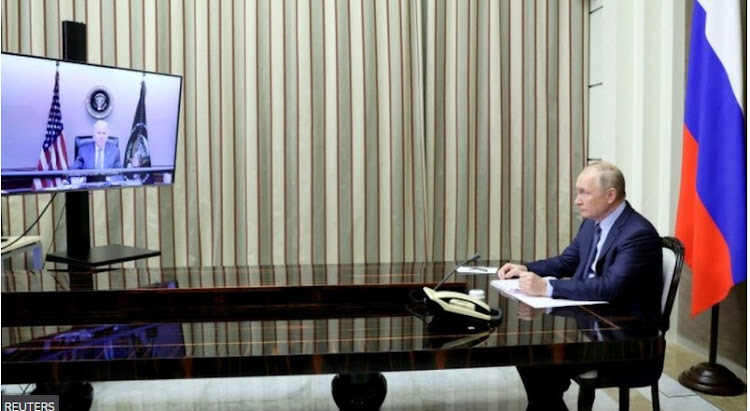 Is there a diplomatic way out?

Not for now. Ukraine has called for talks, but Russia says they can only be held on condition that Kyiv agrees to surrender and demilitarise, and that will not happen.

As well as the war, any eventual deal will need to involve with the West in the east and arms control. The US had offered to start talks on limiting short- and medium-range missiles, as well as on a new treaty on intercontinental missiles. Russia wanted all US nuclear arms barred from beyond their national territories.

Russia had been positive towards a proposed "transparency mechanism" of mutual checks on missile bases - two in Russia, and two in Romania and Poland.

Ukraine is leaking in all directions
News
9 months ago

Moscow will continue its military operations in Ukraine until it had achieved goals defined.
News
9 months ago
Post a comment
WATCH: The latest news from around the World
by BBC NEWS None
World
26 February 2022 - 16:53
Read The E-Paper