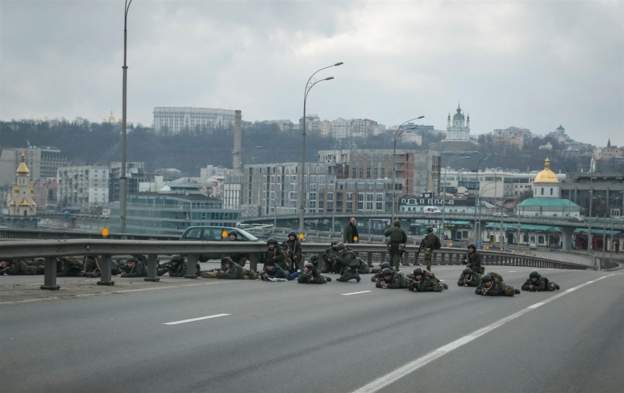 The Russian forces who have reportedly entered the Ukrainian capital are seemingly centred around the northern district of Obolon.

The heavily residential area is just 9km north of Kyiv’s parliament and the city centre.

Just before 10am local time, Ukraine’s Defence Ministry tweeted that enemy Russian operatives were in the area

Kyiv has also been attacked from the air, with residents taking shelter in underground railway stations.

He repeats the line from Vladimir Putin that Moscow does not want to occupy Ukraine - but rather "demilitarise" it.

Asked whether it was Russia's wish to topple a democratic country, Lavrov implies the country cannot be called democratic.

He then makes claims about Ukraine's treatment of Russian-speaking people in the country. 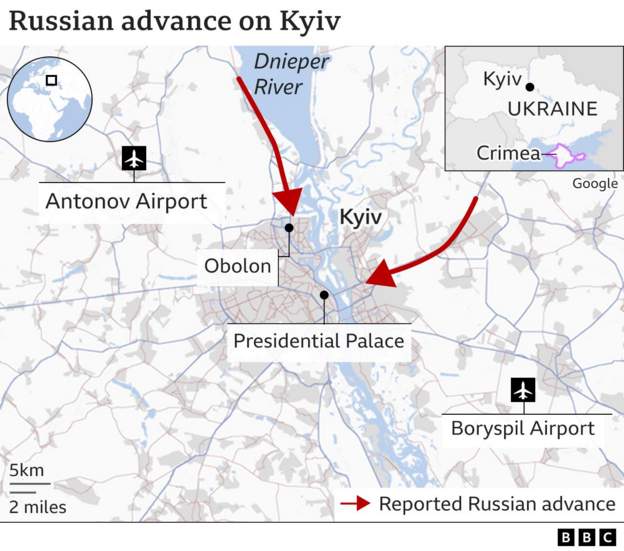 Earlier we reported that the Ukrainian Defence Force, in a tweet, had issued a call for civilian recruits, regardless of age.

The statement from the commander of troops had said: "No age restrictions" - indicating that minors might be allowed too.

However, a new statement from the Defence Minister Alexey Reznikov appears to clarify that the loosening in age restrictions refers to people over 60. It made no mention of minors.

"I decided, in agreement with the Commander of the Troops of the Armed Forces of Ukraine... to involve in the Troops of the Patriots [those] over 60 years old, who are morally and physically ready to resist and defeat the enemy," Mr Reznikov wrote.

Long-time Russian ally China is still declining to condemn Russia, with its foreign ministry refusing to call Russia's action against Ukraine an "invasion".

At a daily news briefing in Beijing, spokesman Wang Wenbin reiterated China's position that while it respected the territorial integrity of all countries, it also understood "Russia's legitimate concerns on security issues".

He added that China still recognised Ukraine as a legitimate state and believed the door to a political solution still had not shut in Ukraine, but did not give suggestions on how dialogue could take place.

He also did not say whether or not Beijing would recognise the self-declared breakaway republics of Donetsk and Luhansk in the east of Ukraine.

The BBC asked for a response to US President Joe Biden’s comment that “any nation which countenances Russia’s aggression in Ukraine will be stained by association”.

Wang responded that the "country whose reputation will be stained is that which interfered in other nation’s internal affairs in the name of human rights and which went on to wage wars”.

In terms of sanctions, he said that since 2011, the US had imposed more than 100 sanctions on Russia, yet they had not worked, and that sanctions would only cause suffering.

Ukraine ambassador to East Africa said "Kenya proved to be a dedicated friend of Ukraine".
News
9 months ago

Ukraine has declared martial law and severed all diplomatic relations with Russia.
News
9 months ago