'We'll miss you': Merkel gets fond farewell in Rome

Merkel will stay on as caretaker chancellor while her successors haggle over forming a coalition.

•Merkel earlier had a private audience with the pope.

•They exchanged gifts and discussed the upcoming UN climate talks and the sexual abuse by clergy of children. 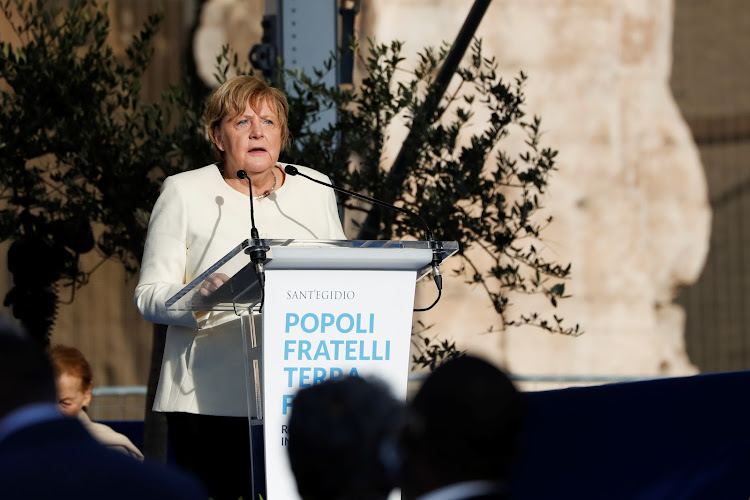 German Chancellor Angela Merkel speaks during an interfaith prayer for peace at the Colosseum, in Rome, Italy, October 7, 2021.
Image: REUTERS

Italian Prime Minister Mario Draghi paid tribute to German Chancellor Angela Merkel on Thursday as the pair, once hailed as Europe's power couple, held what is likely to be their last bilateral meeting in Rome.

Merkel, who is bowing out after a historic 16 years in power, also made a private visit to Pope Francis during her visit, where they discussed climate change and the scandal of clerical sex abuse.

She and Draghi worked together closely when he was head of the European Central Bank (ECB) and at a news conference after their talks Thursday, he applauded her "calm, determination and sincere faith in the European Union".

"She transformed the role of Germany in Europe. We will miss her, but I am sure that we will see her again in Italy -- perhaps in more relaxed settings -- given her love for our country," Draghi said.

Merkel responded that he had been "an essential and crucial guardian of the euro", while also expressing her love for Rome, where her agenda included a tour of St Peter's Basilica and a multi-faith event for world peace at the Colosseum.

"Just a day in Rome tells me that you need to live more than a lifetime here to take everything in," she said, adding: "I'll definitely come back to Italy, albeit in a different way than before."

Merkel will stay on as caretaker chancellor while her successors haggle over forming a coalition, a process she said "will definitely be faster than during the last government formation, I'm sure of it".

Merkel earlier had a private audience with the pope, where they exchanged gifts and discussed the upcoming UN climate talks and the sexual abuse by clergy of children, a problem that has rocked the Catholic Church in Germany, as elsewhere.

"We had important discussions about child abuse," Merkel, the daughter of a Lutheran clergyman, told reporters.

"I wanted to underline with my visit that we think that the truth must come to light, and the topic must be dealt with."

She visited the site of a new institute within the Jesuit-run Gregoriana university dedicated to child protection and met with Father Hans Zollner, the Vatican's leading expert on measures to safeguard minors.

At the Colosseum event, hosted by the Sant'Egidio Catholic charity, Merkel was a keynote speaker alongside the pope and other faith leaders such as top Sunni Islam cleric Sheik Ahmed al-Yayeb, grand imam of the Al-Azhar mosque and university.

In his address, Francis offered a recipe for a better world as he called for "fewer arms and more food, less hypocrisy and more transparency, more vaccines distributed fairly and fewer weapons marketed indiscriminately."

There are questions of who will now lead Europe after Merkel's departure.

"Italy will not take Germany's place, rather Italy will represent Italy and Germany will be Germany. My successor will also be an important voice for Germany and represent Germany," she said.

As for Draghi, after his country took a eurosceptic turn under previous governments, he is determined to put Italy back in the heart of the EU.

He praised Merkel for having a "decisive role" in establishing the EU's post-pandemic recovery fund, of which Italy is the main beneficiary, saying it was a "tangible sign of European solidarity".

The German chancellor added that she had "confidence that Italy will give the money out in a good way".

Germany is inching towards a government led by Olaf Scholz after the Greens and the liberal FDP party said Wednesday they would try for a three-way tie-up with his Social Democrats while shunning Merkel's conservatives.