Why Trump increased support from non-whites

The group that saw the biggest increase in support for Trump compared to 2016 was black men.

• The Republican president gained a 6% vote share among black men and a 5% increase among Hispanic women.

• It means some voters changed their minds and decided to cast their vote his way, after either not voting or voting for another candidate in 2016. 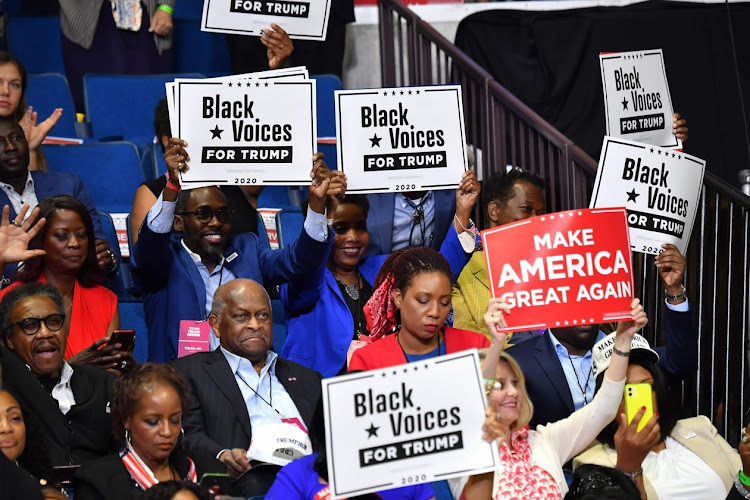 Despite his election defeat, President Donald Trump can boast a success that has intrigued pollsters - he was more popular with ethnic minority voters than in 2016.

Some might find this surprising given that his political critics so often accused him of racism and Islamophobia. Mr Trump denies being a racist and has accused Democrats of taking African Americans voters for granted.

The Republican president gained a 6% vote share among black men and a 5% increase among Hispanic women.

It means some voters changed their minds and decided to cast their vote his way, after either not voting or voting for another candidate in 2016.

But it tells us something about Mr Trump's unique appeal.

"I was definitely more liberal growing up - my grandmother was big in the civil rights movement here in Texas during the 60s, and I grew up with that ideology."

Mateo Mokarzel, 40, is a graduate student from Houston, Texas and is of mixed heritage, Mexican and Lebanese. He didn't vote in 2016, and he isn't loyal to either major party - but this time around he decided to cast his vote for the Republicans.

"The first time Trump ran I really wasn't convinced. I just thought, here's this celebrity talk-show host guy that wants to run for president, I didn't take him seriously - so I was not a Trump supporter the first time he ran. To be honest, I thought he was a ringer for Hillary, so I just wasn't interested," he tells BBC News.

But Mateo says his upbringing in Texas coloured his view of both political parties.

"It's hard for people who aren't from here in Texas, people forget that Texas used to be a blue state," he says. "The blue here wasn't like the ideological progressives that we think of now, they were more the old school 'southern Democrats' - very racist, very intolerant. So, it was a totally different party, and I had experiences growing up on both sides [of my heritage] of a lot of racism."

Mateo has brushed off accusations of racism levelled against the president. Instead, he says he was attracted by Mr Trump's isolationist foreign policy and economic policies. 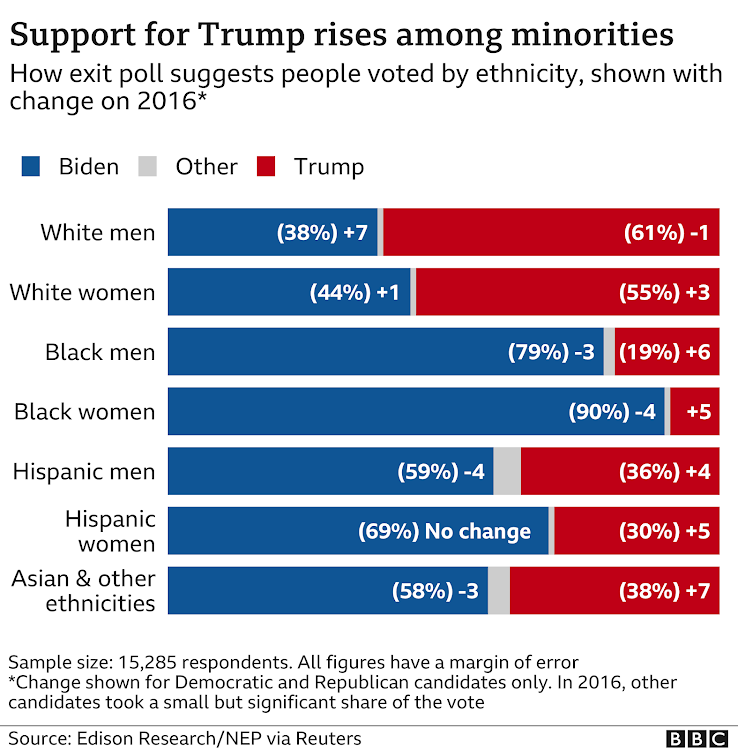 "He really delivered on his anti-globalisation policy," he says. "Neo-liberal expansion has really hurt both Mexico and the US, and when you have family that live there, and you can see how it's hurt people living, their jobs, their wages, it really has increased the narco-war, and this is one of the things Trump came in saying - 'hey, we're going to tear apart these trade deals' - and then he actually did it. That was for me the first sign that he actually meant some of the things he was saying."

Mateo's wife Lily, a teacher, first-generation Mexican-American and also a Trump supporter, adds that she voted for him for economic reasons - "our salaries have increased since Trump became president" - and because she likes his "genuine self", despite her colleagues and her union supporting Mr Biden.

"The way I've been seeing him attacked, the lies," she says. "I never used to vote, because I never felt my vote counted… And I feel like, since Trump has been in office our lives have improved."

Elizabeth, 27, also changed her mind about the president over the course of his four years in office. She's a Mexican-American voter from Laredo, one of Texas's majority-Latino border cities in which Mr Trump over-performed with voters this year. She didn't vote in 2016 and initially wasn't convinced by Mr Trump.

But when it came to casting her vote, she felt the Republican party best reflected her socially conservative, Catholic beliefs - particularly on abortion.

President Trump recently nominated anti-abortion judge Amy Coney Barrett for the Supreme Court, and said it was "certainly possible" they could revisit Roe v Wade, the law that legalised abortion nationwide in 1973.

"My family were all Democrats, it was a huge line of Democrats in my family - but this time I did see a difference," Elizabeth says.

"A lot of presidents make promises but they never keep them, including [former President Barack] Obama. With Trump, when he came into office he came in promising, and at first, I was like, 'oh yeah more empty promises' - but then I started seeing the results… I do love that he's pro-life and pro-God, and for me, that's very important."

In 2020 Latinos overtook the black community to become the largest minority voting bloc in the country - and are therefore a politically powerful group. But it is also diverse, made up of people from very different political and cultural backgrounds.

Even on issues such as immigration, on which President Trump has been notoriously hardline, the Latino community is less monolithic than some assume.

A 2017 Gallup poll, for example, found that 67% of Hispanic people said they worried a great deal or fair amount about illegal immigration - higher than the proportion of non-Hispanic white people (59%) who answered the same way.

When the first results were called on election night, there was a surprise when it was announced that Miami-Dade had lost a chunk of the Democratic support it had in 2016.

Democratic analysts wondered whether the party had done enough to appeal to Cuban-Americans, who make up a large proportion of that county's voters.

The Trump campaign's painting of Mr Biden and Vice-President-elect Kamala Harris as socialists would have also been successful among Cuban-Americans and Venezuelan-Americans.

Writing in Vogue, Paola Ramos - herself Cuban-American - says: "I come from a family of Cuban exiles and grew up around dinner tables that discussed the crumbling of Fidel Castro's regime - among family discussion that plotted the awaited return to an island that was overtaken by communism in the early '60s. 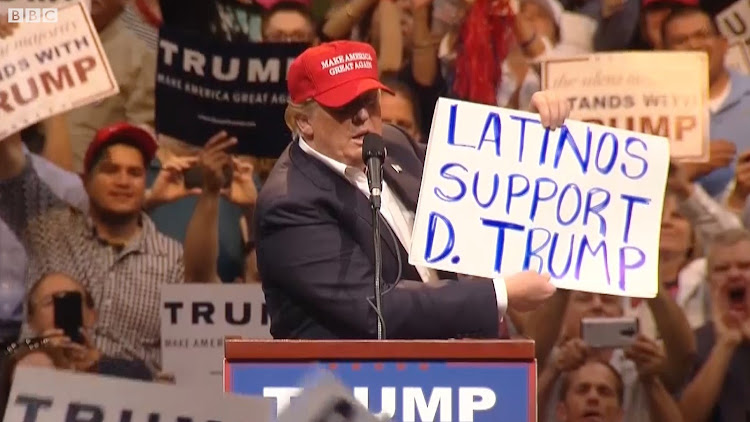 The Republican president gained a 6% vote share among black men and a 5% increase among Hispanic women.
Image: BBC

Like many young Cuban Americans in Florida, we knew the meaning of Castro, socialismo, and comunismo before we even learned how to add or subtract."

The group that saw the biggest increase in support for Mr Trump compared to 2016, however, was black men.

The black community has long been seen as the most solidly blue voting bloc, consistently lending its support to the Democrats in large numbers each election.

This year was no different - in fact, according to exit polls, white voters were the only group in which a majority voted for Mr Trump.

For this reason Sam Fulwood III, who conducted the Black Swing Voter Project this year, tells BBC News that the increase in support for Trump among black voters shouldn't be overstated:

"I think it's more hyped than reality," said Mr Fulwood, who has been highly critical of Mr Trump. "No other demographic in US society voted for Joe Biden in higher numbers than black men, except black women."

But although black voters tend to overwhelmingly vote Democrat, they are not a monolith. According to a Pew Research Center study from January 2020, a quarter of black Democrats identify as conservative, and 43% as moderate.

A 2018 Harvard-Harris poll also found that black Americans are more in favour of reducing legal immigration than any other demographic - 85% said they wanted immigration to be reduced from its current level, and 54% chose the strictest options available - allowing fewer than 250,000 immigrants into the country per year, or even saying they would want to allow no immigrants at all.

In an article in the LA Times that same year, former diplomat Dave Seminara suggests this is because young black men in the US "often compete with recent immigrants for low-skilled jobs".

In their book Steadfast Democrats, published in February this year, Ismail White and Chryl Laird suggested the reason black voters have so consistently voted Democrat in the past was not because of a unified ideology, but because of "social pressure from other black voters".

Organisations such as Blexit, headed up by right-wing personality Candace Owens, gained increasing prominence too.

And this year, several black celebrities appeared to voice their support for Mr Trump, including rappers Curtis Jackson (aka "50 Cent") and Ice Cube - although 50 Cent later rowed back his endorsement, and Ice Cube, who had backed Mr Trump's Platinum Plan, distanced himself from the president's actual campaign.

Black Entertainment Television (BET) founder Robert Johnson also voiced many black voters' frustrations with the Democratic party, when he told US broadcaster CNBC: "I think black Americans are getting a little bit tired of delivering huge votes for the Democrats, and seeing a minimal return in terms of economic wealth and closing the wealth gap, job creation and job opportunities… Joe Biden was not an inspiring candidate for many black Americans."

Mr Fulwood tells BBC News that although most black voters he spoke to for the Black Swing Voters Project overwhelmingly believed President Trump was "racist" and "incompetent", they also admired how he "shows strength and defies the establishment".

"Because Americans are fiercely independent, they like strong leadership, and Trump projects the image of being a strong leader," he says.

The president seems to defy authority, he adds. "I think that resonates with a great number of, particularly young, African-Americans, who already feel that the establishment is weighted against them.

Stephanie Muravchik, the author of Trump's Democrats, also suggests President Trump's appeal to some voters was down to his image as a "boss politician" - an old style of a local politician whom she says would be personally familiar with their town's residents.

"It's a culture where men are absolutely required to defend themselves against any kind of insult," she tells BBC News.

"Trump really intuitively understands that culture and adopts it as his own. He says things like, 'never show fear, it's all about strength' - when he got Covid and then recovered, he whipped off his mask. That may seem absurd and childish to some, but it reads differently in these communities."

The Covid-19 stimulus cheque sent to US citizens, with a letter personally signed by President Trump, was an example of so-called "boss politics" in action.

"Trump really wanted to sign the cheques," she adds. "As mine was automatically deposited, I got a letter from the US government signed by Trump, saying 'Hello Stephanie, I have given you this money, I'm looking out for you. Sincerely, Trump'. It was really absurd, but it was brilliant, because it was invoking that model of a politician as a protector."

But even with all of this in mind, are the racism accusations off-putting for minority voters?

For Mateo, these claims have only strengthened his resolve to support Mr Trump - and to push back against what he calls "media bias".

"He has a strong nationalist stance, and they try to portray that as racist," Mateo says. "Protecting your borders and building up your economy is something most Americans want... I don't see how that's racist or some kind of dog whistle."