Trial is one of three large late-stage trials underway for the Sinovac vaccine.

• The trial organisers who countered there had been a death case but it was unrelated to the vaccine. 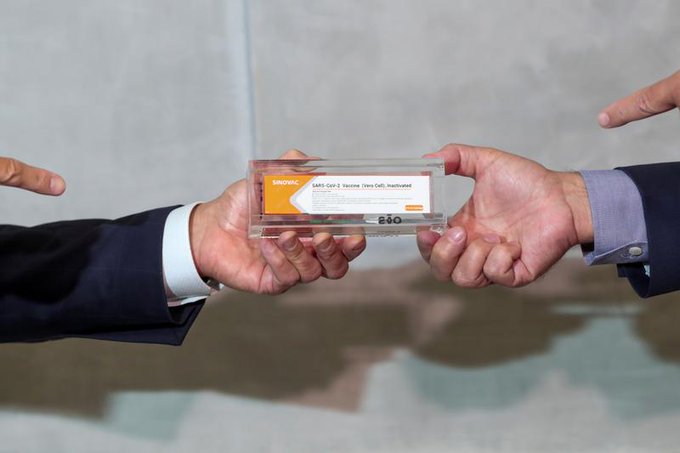 A box of China's Sinovac, a potential vaccine against the coronavirus disease (COVID-19), is held during a news conference at Instituto Butantan in Sao Paulo, Brazil November 9, 2020. REUTERS.

Surprising the trial organisers who countered there had been a death case but it was unrelated to the vaccine.

The health regulator, Anvisa, said on Monday the event occurred on October 29 but did not specify if it took place in Brazil or in another country.

It also did not give an indication of how long the suspension might last.

The trial is one of three large late-stage trials underway for the Sinovac vaccine. The vaccine has, however, faced controversy in Brazil with President Jair Bolsonaro dismissing it as lacking credibility.

The setback to Sinovac’s efforts contrasts with good news from Pfizer Inc which said its experimental Covid-19 vaccine is more than 90% effective based on initial trial results.

Dimas Covas, the head of Sao Paulo’s medical research institute Butantan which is conducting the Sinovac trial, said the regulator’s decision was related to death but added he found it strange “because it’s a death unrelated to the vaccine.”

“As there are more than 10,000 volunteers at this moment, deaths can occur... It’s a death that has no relation with the vaccine and as such, it is not the moment to interrupt the trials,” Covas told local broadcaster TV Cultura.

Sinovac said in a statement on its website on Tuesday it was confident in the safety of its vaccine and will continue to communicate with Brazil on the matter. It has previously said it expects interim results of late-stage trials this year.

Post a comment
WATCH: The latest news from around the World
by REUTERS Reuters
World
10 November 2020 - 13:48
Read The E-Paper