Millions hunker down in India, Bangladesh as cyclone arrives

• Millions of people were evacuated in anticipation of the storm, which originated in the Bay of Bengal.

• The storm, the first super cyclone in the area since 1999, is forecast to cause deadly storm surges, severe flooding and mudslides. 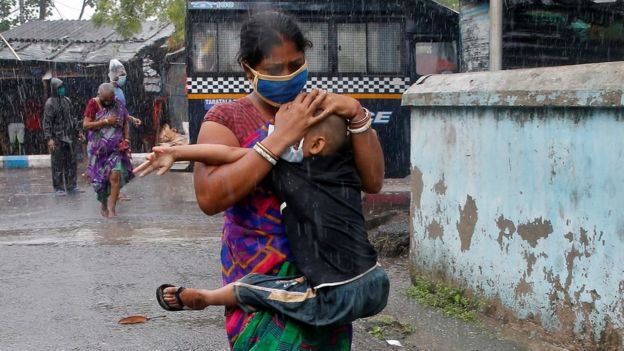 People are taking shelter in Kolkata as the cyclone approaches.
Image: BBC

Millions of people were evacuated in anticipation of the storm, which originated in the Bay of Bengal.

The storm, the first super cyclone in the area since 1999, is forecast to cause deadly storm surges, severe flooding and mudslides.

The coronavirus and social-distancing measures have made mass evacuations more difficult for authorities.

India's weather department said in an afternoon update that Amphan was making landfall in a process that would take several hours.

It has begun hitting the Sundarbans, a mangrove area around the India-Bangladesh border, and will later move north and north-eastwards near the major city of Kolkata in India's West Bengal state, meteorological officials said.

Amphan is then expected to move further into Bangladesh on Thursday, and later Bhutan.

The storm was the first super cyclone in the Bay of Bengal since one in 1999 that killed thousands of people but its winds have since weakened, according to BBC Weather. Indian officials said the current wind speed in the Sundarbans was 160-170 km/h, with gusts of up to 190km/h - equal to a Category Three hurricane.

A Bangladesh Red Crescent volunteer helping villagers to evacuate became the first fatality after the boat he was in capsized in strong winds, the organisation said.

"At least 50 people took shelter in my concrete-built house," Bangladeshi prawn farmer Abdur Rahim, who lives on on the edge of the Sundarbans, told the AFP news agency.

"There is panic. The women are worried... A few months ago Cyclone Bulbul smashed our village, destroying at least 100 homes. We hope Allah will save us this time."

India and Bangladesh have asked for schools and other buildings to be turned into temporary shelters - but they need more space than usual in order to house people while maintaining social distancing.

Police in West Bengal, which along with the state of Orissa (also known as Odisha) is expected to be the worst-hit part of India, told the BBC that people were unwilling to go to the shelters because they were afraid of contracting Covid-19.

Officials in Bangladesh fear it will be the most powerful storm since Cyclone Sidr killed about 3,500 people in 2007. Most died as a result of sea water surging in.

The cyclone comes as tens of thousands of migrant workers continue to flee cities for their villages during India's lockdown to curb the spread of coronavirus. West Bengal and Orissa are among the Indian states seeing large numbers return.

Orissa has cancelled trains that were due to arrive with thousands of migrants between 18 and 20 May. Some district officials have barred entry and asked the state government to accommodate the migrants - many of whom are walking home - elsewhere until the storm passes.

Both states have halted air traffic as well.

Extra shelters have been prepared to allow for social distancing, while masks are also being distributed.

However, there are fears for hundreds of thousands of Rohingya refugees who fled Myanmar and live in crowded camps in Bangladesh. The main camps are not in the direct path of the storm but Bangladeshi officials said they had moved hundreds of Rohingya living on an island in the Bay of Bengal into shelters.

The UN and human rights groups are also gravely worried for hundreds of Rohingya refugees who they believe could be on boats in the Bay of Bengal, and possibly in the storm's path, after trying to flee to Malaysia and Thailand but being blocked by authorities in those countries from landing.

Meanwhile, state officials in India are struggling to find shelters for evacuees. In Orissa, for instance, 250 of the more than 800 existing shelters are being used as coronavirus quarantine centres.

The governments of West Bengal and Orissa have evacuated nearly half a million people.