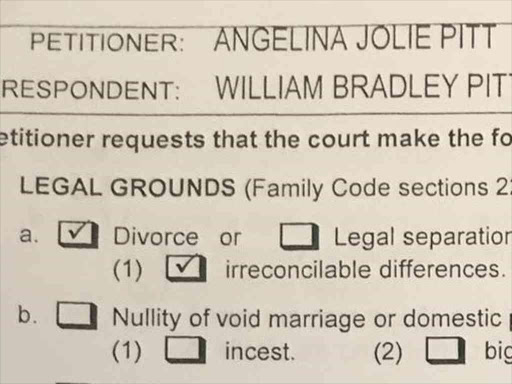 A copy of papers filed at Los Angeles Superior Court by Angelina Jolie shows her petition for divorce from her husband Brad Pitt in Los Angeles, California, US September 20, 2016. /REUTERS

Brad Pitt and Angelina Jolie appeared to be heading for a court battle over their children last night – as the actor told friends that his wife had "unleashed hell'.

Pitt, 52, was said to be "furious" with Jolie over claims he had posed a threat to their family because of an anger problem and his heavy consumption of marijuana and alcohol.

Pitt was said to have told friends that Jolie, who filed for divorce on Monday citing "irreconcilable differences", had "no chance" of getting her demand for sole custody of their children.

If Jolie, 41, were to be granted sole physical custody, it would mean Pitt would be allowed only visitation rights.

While Pitt has told friends not to criticise his wife publicly and has praised her parenting skills to them, he is said to be incensed that she has created a media storm, with the family home in Los Angeles surrounded by paparazzi.

Although both stars have insisted through friends that they want to settle the divorce amicably, Jolie has hired Laura Wasser, one of Hollywood’s most feared divorce lawyers – who represented actor Johnny Depp in his recent split from Amber Heard.

Jolie, who has been married three times, has reportedly set up a "war room" in a Los Angeles house where she, Wasser and their team can work out their strategy for Hollywood’s biggest divorce in decades.

It has been claimed that Jolie secretly rented the new home without the knowledge of her husband, who split from his first wife, actress Jennifer Aniston, in 2005.

"Brad still cares for Angelina very much and respects her as the mother of his children," a source close to the couple said. But they added that Pitt was now "hoping to be able to turn the volume down", after claims about his drinking and drug-taking – coupled with "completely untrue rumours" about an affair with French actress Marion Cotillard, with whom he co-stars in Second World War film Allied.

The insider said: "People close to him specifically avoided criticising her while trying to stay positive in defending him at Brad’s request."

Jolie’s camp has claimed Pitt’s behaviour 'crossed a line" in recent days and the details will soon be revealed. If the divorce does end in an embarrassing court showdown, Jolie’s past heroin addiction, claims of eating disorders and alleged self-harming could be dredged up.

On Wednesday, as removal vans were seen arriving at the couple’s estate in the Hollywood Hills, it was claimed that in the past few days Pitt had pleaded withJolie to handle their break-up ‘like adults’, keeping it quiet for the benefit of their children.

The children – Maddox, Pax, Zahara, Shiloh, and twins Knox and Vivienne – are aged from eight years old to 15.

Although both sides have insisted that the divorce was not prompted by either of the stars’ infidelity, reports emerged yesterday that suggested Miss Jolie had become consumed by jealousy and suspicion about her husband.

In the US there were claims Jolie had sacked their children’s nanny six months ago because she had become "uncomfortable" with the woman’s flirtatious behaviour with Pitt.

It was reported that Jolie had noticed the nanny was always at the swimming pool when her husband was there.

Her "paranoia" grew when she saw the pair in the kitchen – Pitt had only a towel wrapped around his waist while the nanny had a "huge smile on her face".

It was also claimed that Jolie ‘blew a gasket’ when she saw a picture of Pitt chatting to the 24-year-old actress and singer Selena Gomez at the Golden Globe awards in January.

Gomez appeared in last year’s film The Big Short, in which Pitt starred.

After allegedly learning from friends the pair had been flirtatious, Jolie made Pitt promise never to work with Gomez again, it was claimed.

Friends of Jolie have strenuously denied claims that Pitt had an affair with Cotillard or that his wife had hired a private detective to investigate their relationship while making the forthcoming Allied in London.

But it was claimed yesterday that Jolie was so jealous of the 40-year-old actress, who plays Pitt’s wartime lover in the film, that she "completely ignored" her on a visit to the set.

"When Marion tried to talk to her, she just looked the other way," said a source.

The insider added that, as there had not been anything going on between the co-stars, Jolie’s behaviour had left Miss Cotillard, who has a partner, "devastated".