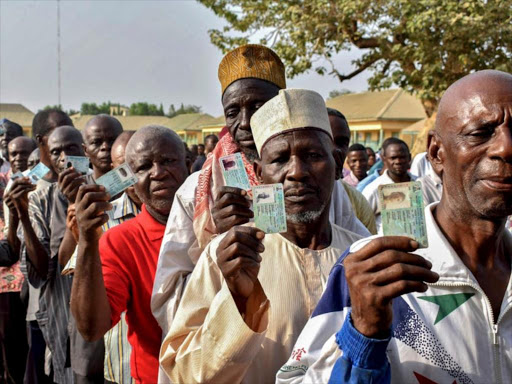 Nigerians lined up to cast their ballots in the presidential elections in Abuja. /THE CONVERSATION

The conduct of periodic, competitive, participatory, credible and non-violent elections is one of the used to determine the democratic condition of a state.

As such, Nigeria’s is pivotal to the sustenance and consolidation of the Nigerian democracy. The elections have confirmed the Nigerian electorate’s constitutional right to elect new leaders and punish nonperforming ones by denying them their votes.

Because of , the Independent National Electoral Commission was under pressure to deliver credible and non-violent elections. Its attempts to distribute materials across Nigeria’s 36 states before were marred by mishaps. For example, evidence from European Union observers showed that electoral materials and officers in some units in the region around Abuja.

at some polling units in Kano, Lagos and Kaduna states. Voting in some states was also impacted by a failure of the commission’s card reader machines. In Gezewa and Fagge locations in Kano State, because the voters couldn’t be identified. Faulty card reader machines also disrupted and delayed voting process in Sokoto, Enugu, and Kogi states.

In addition, elections were cancelled in some polling units in Anambra, River and Lagos states because by rival political party supporters. Some of the hoodlums who caused the disruption were arrested. Voting resumed and the results are currently being collated.

The outcome of the poll now depends on the electoral commission’s ability to manage the vote counting process governing the conduct of elections in Nigeria.

In my view, Nigeria’s main problem both then and now has been the repeated attempts by candidates to manipulate the process. In this particular election, it must be noted that the incumbent has been defeated in a few areas where he should have won. This is significant. As regards the level of violence, this election has been relatively peaceful when compared to the 2015 poll where 55 deaths were recorded. Even then, there has been a glaring display of ineptitude within security circles, especially in opposition strongholds.

Elections conducted by the commission since Nigeria’s in 1999 have been marred by electoral malpractices. These include on voters, commission officials and members of the opposition.

The majority of these attacks were politically motivated and intended to disrupt the voting process. The elections in 1999, 2003 and 2007 were and tainted by violence. But the tide turned in 2011 when was witnessed. This was courtesy of new election laws and the which created new guidelines for the conduct of national elections.

Some of the changes that contributed to the success of the 2011 election were the use of biometric data in voter registration and that permanent voters’ cards were issued. These two things sealed the loopholes in the manual voting system which had been particularly easy to manipulate.

The use of National Youth Service officers in the registration of voters and execution of the vote on polling day also of the 2011 poll.

But even with that relative success, erupted across 12 states in the west and north east of Nigeria. 800 people died and over 65,000 were displaced.

In a bid to conduct a credible and non-violent election in 2015, the electoral commission because of the security threat posed by Boko Haram. Unfortunately, 58 people still lost their lives to that erupted in 22 states.

Expectations of the 2019 poll

Regardless of the technical and logistics challenges in 2019, there was . The Nigerian electorate is hungry for a government that will solve their everyday problems. Some of the issues that need fixing are the economy, high cost of living, unemployment, widespread poverty, persistent violent killings, and ethno-religious tensions.

While these are valid concerns, some have speculated that the high turnout could also have been a result of . This speculation cannot be dismissed given Nigeria’s history of .

Additional research was done by Dare Leke Idowu. A Doctoral applicant in the Department of Political Science at the Obafemi Awolowo University in Ile-Ife, Nigeria.