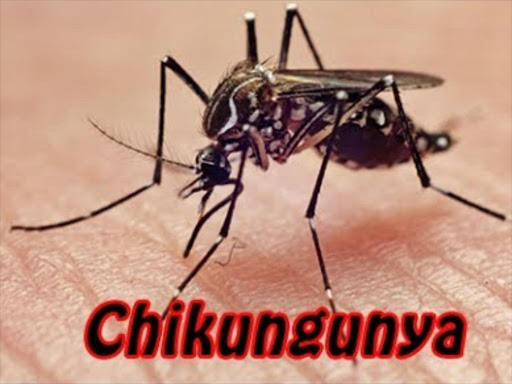 "Kenya’s caseload has seen more than 100 people infected with chikungunya in Mombasa since January 2018." /COURTESY

Kenya is one of several countries across the world experiencing an unprecedented outbreak of the and viruses.

Dengue fever and chikungunya are two of several arboviral diseases – which are spread to people when they’re bitten by an infected mosquito or tick.

Globally there’s been an and recurrence of these diseases.

Outbreaks have been reported in Europe – in in particular – as well as and the . Reports of have arisen after a lapse of more than 70 years.

And in Africa, Burkina-Faso has also seen in the last two years. In more than 1.4 million people were infected with dengue in 2016 and have suffered serious after effects.

Kenya’s caseload has seen more than 100 people infected with chikungunya in Mombasa since January 2018 after another 100 were infected with dengue in the seaside town last year.

These are not the first incidents. In the last five years, there have been several outbreak reports of the same diseases in the North Eastern part of Kenya. According to , the town of Mandera in the north east of the country recorded 1700 positive cases of chikungunya in May 2016.

The challenge with these two viruses are that they have no vaccines or treatment. Controlling the vector is the only way to prevent and control these diseases so that outbreaks don’t get out of control.

But part of the problem is that the Kenyan government has not instituted any policies that could regulate the control of these diseases. The government has done this with malaria by instituting several policies in the that has helped control the spread of the disease.

Unless the government establishes policies to deal with dengue fever and chikungunya, like it did for malaria, it will have challenges managing the spread.

Policies that prevent the spread of malaria in Kenya have been in place for over a decade. There are two main methods: and . In parts of the country, these methods have resulted in the disease’s caseload .

But these measures would do little to contain the vector that spreads dengue and chikungunya.

This is because unlike for the malaria vectors that bite at night and can be controlled by sleeping under bed nets, – the main vector that spreads dengue fever and chikungunya – bites during the day. Sleeping under bed nets would therefore have minimal impact in the control of the diseases.

The spraying of insecticides is not advocated because it targets unintended organisms and has a detrimental effect on the environment. In addition, there is the challenge of insecticide resistance.

There are two approaches that the national and county governments could try: urban planning policies as well as policies that target land use. Some of these could be simple and easy to achieve.

on the Aedes aegypti – also known as the black mosquito – has shown that the mosquito prefers breeding in:

Urban planning policies that tackle these three areas could reduce the transmission risks of dengue and chikungunya.

One example is a policy that encourages a cleaner environment and for people to dispose their solid waste properly. This would rid urban centres of garbage lying around that provides artificial man-made habitats for the black mosquito.

Another would be for government to provide enough tap water to residents so that water is not stored in pots and tanks. These should be accompanied by education campaigns which sensitise citizens about the importance of covering, emptying and cleaning their domestic water storage containers weekly.

And a third policy could be improved environmental management. This includes better drainage systems around residential areas, and clearing bushes and shady areas. This would help destroy the breeding sites for these mosquitoes.

In terms of land use, suggests that attempts to could be linked to a high prevalence of dengue fever and chikungunya. In Kenya this could be caused by plants that have been imported into Kenya bringing in invasive weeds like . This weed is the for mosquitoes. Similarly to the protein mosquitoes get from blood, sugar is important for the biology and ecology of mosquitoes. For male mosquitoes, it’s the main source of energy.

There could be a benefit for government to turn vast areas of agricultural land into conservancies.

It’s clear that with proper policies and planning, dengue and chikungunya can be controlled but the government must take the first steps.

, Medical Entomologist at the School of Biological Sciences,