•There's a big global market for speciality teas and smallholder farmers and factories are being trained to take advantage of it. 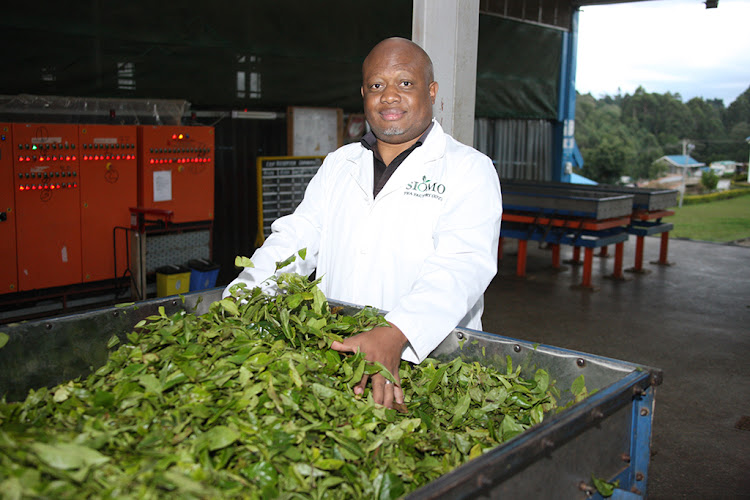 TEAMAN: Robert Koech, MD of Siomo Tea Factory, says they buy tea from 10,000 farmers who are not affiliated to the Kenya Tea Development Agency and who previously would throw away their tea for lack of market.
Image: AGATHA NGOTHO

The liberalisation of the tea industry in 2016 opened doors to the emergence of private factories in the country.

This has seen tea farmers who were not affiliated to the Kenya Tea Development Agency benefit from the sale of their tea.

Siomo Tea factory is one such private factory that has been able to infiltrate the world tea market and is currently selling its tea at the Mombasa Auction.

Siomo Tea Factory managing director Robert Koech said by doing so, they have been able to support 10,000 farmers get market for their produce which they previously would throw away for lack of market.

He said the tea factory has been in operational for four years and they collect tea on a day-to-day basis, and payments are done on the first day of the month.

It is a family business that was started by his father General John Koech  who sold his posh home in Lavington at Sh400 million to start the tea factory.

The factory is currently run and managed by three brothers and Koech was quick to add that they have received a lot of support from the ‘big brother’- KTDA and also from the Tea Board of Kenya.

“Our model here is similar to KTDA, we do not have our own farms but we go and collect from farmers. I must say it has been quite a fulfilling journey but the main challenge is the quality aspect. We still need a lot of work in talking to the farmers in terms of plucking the two leaves and a bud which at the end of the day gives you a better cup of tea,” he said.

Koech said in order to achieve good quality, they have hired professionals and they have seen a positive impact because their tea is selling well at the Mombasa Auction which is their main market.

“We also get multiple requests from buyers who are not active in Mombasa auction, and we want to see if we can strike a contract,” Koech said.

He said they are processing a variety of teas including white tea, purple, orthodox and decaf tea though in small volumes.

“This is a niche that is actually growing, but the trick is to work on the market because there are a lot of other teas that are flooded in Kenya and around the world from other places. We are not really known yet but with a lot of marketing, we will be able to let people know that we can also make different types of tea,” Koech said.

“Right now, the opportunities are all over the world, from the US to Germany to Japan to China. Many of them are always looking for the right tea. But we need to let the world know that Kenyan tea is fresh and its pesticide free,” he said.

The incubation centre being established at the Tea Research Institute in Kericho county is seeking to support more investors who are interested in getting into the tea business especially in processing of specialty tea.

“These specialty teas are much healthier than the other products you know off. The centre will create employment within the country and make tea consumption attractive to the young people,” he said.

Specialty tea according to the Tea Research Institute include white tea (tea made from very fine two leaves and a bud or the bud from specifically selected clones) and purple tea that is harvested from a specific purple tea plant.

Kamunya said the incubation centre will offer training to any investor interested in investing in the cottage tea industry that can process specialty tea, and ensure consistent supply of high quality Kenyan orthodox, purple or white teas to the international market throughout the year.

“Farmers are slowly embracing production of purple teas variety. The problem we have is that factories are not ready to process this tea as a specialty. The normal tea factory is a huge investment which requires big machines and a big space for this machinery. However, if factories allow space for specialty tea processing line, then adoption of specialty of tea processing and value addition would be achieved faster,” said the director.

He said the incubation centre will also ensure quality control, and specialty tea processing factories will need to have their samples tested and certified.

James Marete, technical officer, Tea Board of Kenya said specialty tea in Kenya is at its initial stages.

He said Kenya is known for commodity tea mainly CTC but from 2016, TBK has been encouraging producers to adopt specialty tea production system that will give them high value product and that can fetch more in world market.

“This is still a new concept and the adoption is slow at less than 0.5 per cent, with production of less than two million kilos of specialist tea per year. But we are expecting it to start increasing because of the good prices it fetches in the market. Green, white, yellow and black orthodox teas fetch more than Sh500 per kg compared to black crush-tear-curl (CTC) teas which fetch from Sh200 to Sh300 per kg,” Marete said.

Since 2013, farmers in Kericho and neighbouring county of Nandi tea bushes have  been damaged by hailstorms
News
1 month ago

Preliminary findings have been released but the Tea Board of Kenya was not satisfied with some of them especially at the factory level
Counties
3 months ago
“WATCH: The latest videos from the Star”
by AGATHA NGOTHO Science Writer
Star Farmer
23 May 2022 - 22:00