A food report late last year said production could drop by a much as 70% in some areas.

• Average long-rain season harvest yields around 36 million bags of maize, but this estimated harvest will be around 28 million bags.

• Expected harvest for the short rains is usually about seven million bags, but the estimated harvest will be around 3.5 million. 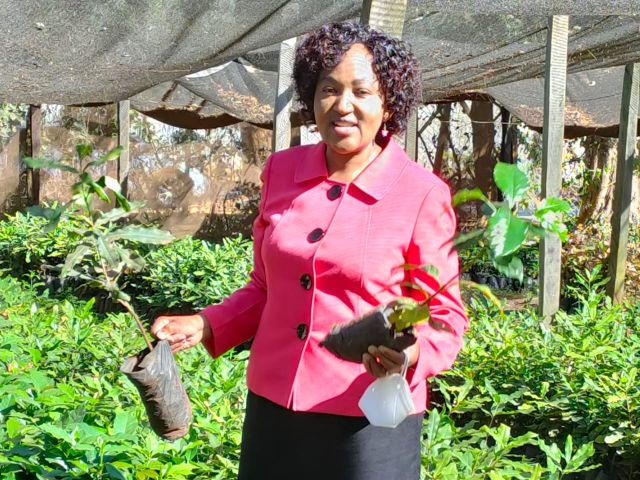 LESS MAIZE: Mary Nzomo, Trans Nzoia Agriculture CEC, said the projected harvest for the 2021 long rains harvest was 5.6 million bags of maize but the county will be get an estimated 4.8 million bags.
Image: AGATHA NGOTHO

Maize production will drop drastically across the country due to erratic rains, army worm and disease, a food nutrition assessment report shows.

Agriculture PS Hamadi Boga confirmed an estimated 30 per cent drop, however, he assured the country has enough maize until March.

The rapid food and nutrition mid-season assessment report conducted between November 28, 2021, and December 4, 2021, shows maize production is expected to drop as much as 70 per cent in marginal agricultural areas.

In addition, the area under crops countrywide is estimated at between 50 and 65 per cent below normal.

In an Interview on Friday, Boga  said the average long-rain season maize harvest is usually around 36 million bags.

“But we are estimating around 28 million bags from the long rains harvest. This is due to erratic rains where most areas received 30 per cent less rainfall,” he told the Star.

Production from the short rains will also be low due to depressed rains in parts of Eastern and Central regions that rely on a crop for this season.

The PS said the expected harvest for the short rains is usually about seven million bags, but this year, the estimate is about 3.5 million bags.

The 2021 short rains mid-season assessment was carried out by a multisector team from  UN agencies and the government through the National Drought Management Authority.

The report said harvesting is ongoing in the high-potential counties such as Uasin Gishu and Trans Nzoia.

“The late start to the current short rains has badly delayed or even deferred planting. The area planted across Kenya is estimated to be 50 to 60 per cent below normal. Crops have wilted due to a lack of moisture and rainfall in the arid and semi-arid counties,” the short rains assessment read.

In addition, production in the current growing season has been further slowed by fall army worm infestation and maize lethal necrosis disease.

The maize is expected to be adequate.

“These issues will be factored into  planning this year. We expect imports from Uganda and Tanzania between January and February but we will keep monitoring the situation and production in Kenya, Uganda and Tanzania," the PS said.

Mary Nzomo, Trans Nzoia  Agriculture CEC, said they had projected a harvest of 5.6 million bags of maize this season but they will be getting an estimated 4.8 million bags.

She attributed the decline to drought, post-harvest losses and areas of army worm invasion.

“Large-scale farmers are still harvesting as we are at the peak of the harvesting period. It is too early to tell if we have a maize shortage as has been reported," she said.

Only 20 per cent of our farmers have released their maize to the market so far and it is only in March when we can tell if there is really a shortage in the North Rift,” Nzomo said.

Demand in some EAC countries as made farmers sell, depleting stocks.
Counties
4 months ago

Bag of maize to sell at Sh3,000, NCPB announces

The farmers says this is due to poor maize prices and high cost of production
News
4 months ago
by AGATHA NGOTHO Science Writer
Star Farmer
07 January 2022 - 22:00