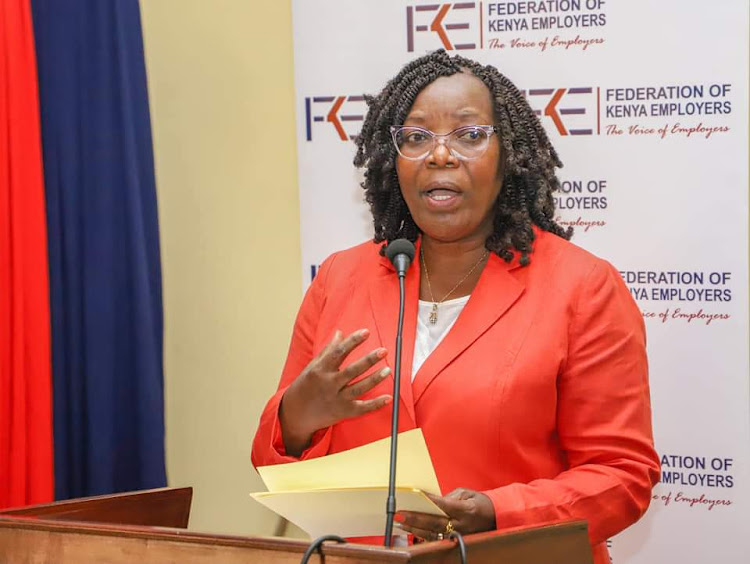 The Federation of Kenya Employers has opposed a proposed law that seeks to protect employees from being pestered by work-related issues outside working hours.

FKE Executive Director Jacqueline Mugo has warned that the Bill by Nandi Senator Samson Cherargei is 'stuck in the past' and would impede government efforts to create jobs.

“FKE does not agree with the proposed amendments because they not only present radical changes to the Employment Act 2007, but also introduce new stringent measures that will curtail the prerogative to manage enterprises by the owners," Mugo said.

"This will automatically pose a challenge to industrial relations in Kenya."

The Employment (Amendment) Bill, 2022, fronted by Senator Cherargei, proposes to introduce a law preventing employers from interfering with employees’ personal time by limiting contact after hours.

The Bill seeks to amend section 27 of the Employment Act, 2007 to introduce ‘the right to disconnect’ by employees, effectively empowering workers to ignore work-related calls, messages and emails during out-of-work hours.

However, Mugo said the proposed amendments would “negate the very essence of managing enterprises freely to meet the demands and challenges posed by the market.”

“With the concept of formalising the informal economy, this bill introduces changes that will make it difficult to persuade informal enterprises to join the mainstream economy for the country’s general growth and decent work,” FKE says.

“The Bill fails to meet the simple threshold of the ILO [International Labour Organisation] conventions. If passed, it will create two centres of managerial power and cause disharmony and indiscipline in workplaces.”

FKE further objects to the proposal to have employers develop policies to regulate phone usage by employees after hours, arguing that, if the phone belongs to the employer, employees are under obligation to answer.

Cherargei's Bill also wants a policy to explain circumstances when they may contact employees during out-of-work hours and specify the nature of compensation for employees who work overtime.

“Where an employer has more than ten employees, such employer shall, in formulating a policy, consult the respective employees or, where applicable, trade union,” the Bill reads.

The Bill states that an employee shall not be reprimanded, punished, or subjected to disciplinary action if the employee disregards work-related communication during out-of-work hours.

It provides that such contact should be to address an emergency within the employee’s responsibility.

The Bill also provides that, in case an employer has no specific work hours with the employee, if the employer contacts an employee, the latter shall not be obliged to respond and, if one chooses to, they shall be entitled to get compensation.

“This Bill seeks to address increased employee burnout. Digital connectivity has also been noted to be slowly eroding leisure time for employees hence affecting their work-life balance,” the senator said.

Cherargei had previously moved a similar Bill, The Employment (Amendment) Bill, 2021, but it failed to go through.

In the new Bill, Cherargei proposes that any employer who contravenes the law should be fined Sh500,000 or be jailed for one year, or both.

Under the proposed law, the right to disconnect means an employee’s entitlement not to be contacted by the employer during out-of-work hours as per the employer’s policy.

Says this this will enable employers, employees adjust to new rates.
Business
1 month ago