What next for Uhuru's powerful CSs as term lapses

•President Ruto made the announcement of the Cabinet nominees shortly after he had chaired his first cabinet meeting with the outgoing CSs.

•Labour and Social Protection cabinet secretary Simon Chelugui and Monica Juma are the only members of the Uhuru's cabinet who have been retained. 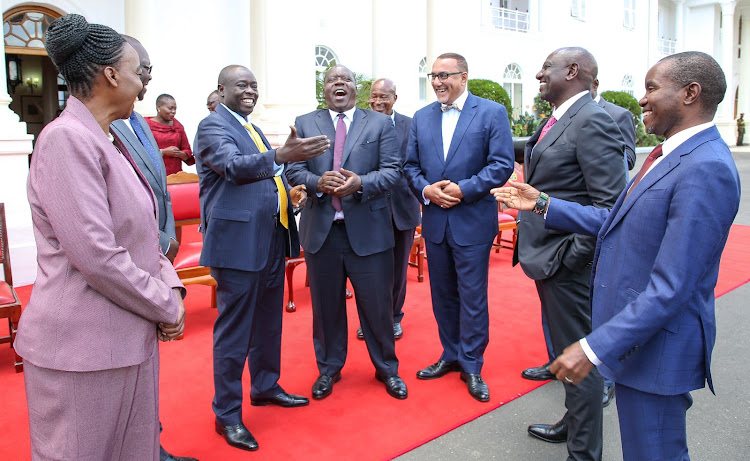 President Willliam Ruto on Tuesday unveiled a list of his cabinet nominees who will take over from those who worked under former president Uhuru Kenyatta's government.

The appointments came shortly after he had chaired his first cabinet meeting with the outgoing CSs.

Labour and Social Protection cabinet secretary Simon Chelugui and Monica Juma are the only members of the Uhuru's cabinet who have been retained.

Focus has now shifted to the three outgoing CSs, some of which clashed with Ruto when he was the deputy president.

Matiang'i was first appointed to Uhuru's cabinet as ICT CS in 2013 to 2015 when CS Mucheru took over.

He was later appointed as the Education CS during a cabinet reshuffle in 2015. And in 2017,  he was appointed the interior CS in an acting capacity following the demise of Joseph Ole Nkaissery.

At the time, he held two ministries; the Education and Interior ministries.

While at the Education docket, Matiang'i unveiled strict measures to curb the rigging of National Examinations in both Primary and Secondary schools.

Sources close to Matiang'i have speculated that he has secured a job at the UN and would accept the offer once he finishes the handing-over process. The outgoing CS, however, has not commented on the matter.

He is also expected to manage several projects he has been working on at his rural home.

Magoha previously worked as a university administrator and headed numerous education, medical and science associations. He has been the face of the Competency-Based Curriculum (CBC), which has attracted love and hate in equal measure.

Part of his wins have been ensuring a 100 per cent transition to secondary school.  He was seen regularly moving from house to house in the slums to ensure pupils who completed primary education joined secondary schools.

Before his appointment in March 2019, he served as a Kenya National Examinations Council (KNEC) director.

In an interview with journalists in August 2022, Magoha hinted at going back to his clinic at the Nairobi Hospital.

He serves as a urologist and treats diseases of the urinary tract at the clinic.

"If you have problems passing urine, don't be afraid. You can visit my clinic at Nairobi Hospital. In fact, just show your press card and you might get special treatment," he told journalists.

Mucheru, on the other hand, served in the ICT docket since 2015. Before his appointment, he was the Head of East Africa Google Office and the Regional Leader for Google Sub-Saharan Africa.

He played a key role in setting up Google in Africa.

Before joining Google, he was the chief executive officer at Wananchi Online, a company he co-founded in the 90s.

Wananchi Online was acquired and renamed Wananchi Group, which is behind the Zuku Home fiber brand.

Speculations are that he might go back to Wananchi or accept an offer at Google.

Farida Karoney, a former Journaist, was first appointed as Lands CS in February 2018.

Before her appointment, she was the Chief Operating Officer of Royal Media Services.

During an interview with Citizen TV's Jeff Koinange in May 2021, Karoney revealed that after her CS term lapses, she intends to do other things such as teach in the university and serve in other capacities.

"I think I have the skills, knowledge and energy to do many things for this country," she said.