• Kibwezi subcounty police commander George Kashmir said the five died on the spot during the accident that occurred in Mtito Andei area on Sunday.

• He said the matatu was headed to Nairobi, while the lorry was moving towards the Mombasa general direction when the incident occurred. 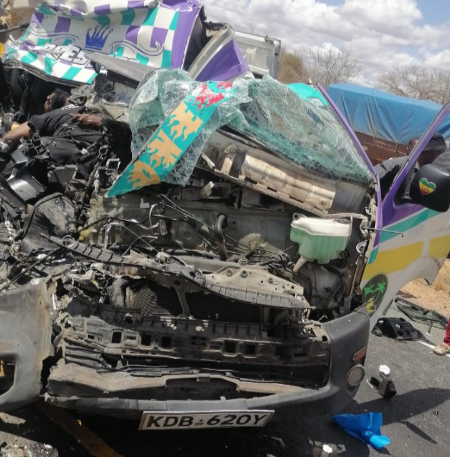 The mangled wreckage of the matatu involved in the accident at Mtito Andei in Makueni county on Sunday, September 25.
Image: GEORGE OWITI

Five people died Sunday evening in a grisly road accident involving a matatu and a lorry on Mombasa road in Makueni county.

The dead included a matatu driver, woman and her three children.

"An accident has occurred today September 25, 30 kilometres away from Mtito Andei as you head to Voi. Two vehicles; a matatu Prestige belonging to Kinatwa Sacco. The matatu was wrongly overtaking when it had head on collision with the lorry," Kashmir said on phone.

The police boss said the children were aged one, three and four years respectively.

"Three children of ages between 1, 3 and 4 years died on the spot. A woman suspected to be the children's mother and matatu driver also died on the spot. Five other passengers have been rushed to Makindu Level 4 Hospital in stable condition," Kashmir said.

He said the matatu was headed to Nairobi while the lorry was moving towards Mombasa general direction when the incident occurred.

The police boss added that five other passengers of the ill fated matatu sustained injuries and were rushed to Makindu Level 4 Hospital where they had been admitted and receiving medication.

He cautioned motorists especially public service vehicles' drivers to be more careful on the road to avoid unnecessary lose of lives through accidents.

"Drivers especially of PSVs to be careful on the road because they carry many people and losing many lives in an accident is bad. All drivers should be careful especially while overtaking," Kashmir said.

"Let them not rush, they will reach their destinations. We will try as police to make sure that those vehicles recklessly driven are impounded abd their drivers arrested and charged with careless driving," Kashmir said.

He said the lorry's driver fled the scene after the incident.
News
2 months ago

However there were no casualties.
News
2 months ago
Post a comment
WATCH: The latest videos from the Star
by GEORGE OWITI
News
25 September 2022 - 19:03
Read The E-Paper