Farmers to buy cheaper fertiliser at cereals board depots 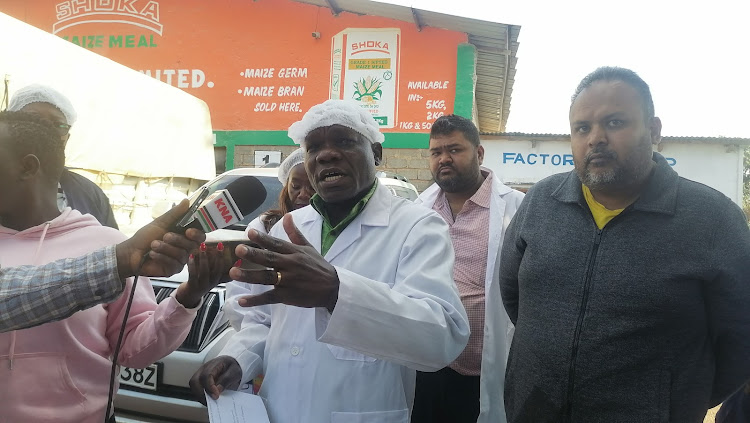 Farmers have urged the government to ensure only genuine individuals benefit from the subsidised fertiliser.

Kenya Farmers Association director  Kipkorir Menjo said the government should have data on the genuine small-scale farmers to prevent unscrupulous traders from benefiting from the fertiliser subsidy.

"The Sh3,500 is good news for farmers in the Eastern and Central region but government should ensure the fertiliser gets to the farmers on time. The quantities are sufficient  but only genuine farmers should benefit from this," Menjo said.

Joseph Wanjuki, a farmer from Kieni in Nyeri county, said the nearest cereals board depot is far from him, and he would rather spend Sh1,000 to get the fertiliser from the nearest depot.

According to Agriculture Principal Secretary Francis Owino, farmers can now buy fertiliser at the nearest cereal board depots.

"To ensure efficient delivery and effective control mechanisms are in place, the fertilisers will be availed through the National Cereals and Produce Board depots and sub-depots country wide, effective September 19, 2022," Owino said.

The PS said individual farmers will be entitled to a maximum of 100 bags of 50kg.

He said the price only favours those farmers who will buy from NCPB, but added that fertiliser prices should start stabilising in the market.

In his inauguration speech on September 13, President William Ruto said as part of the government's intervention to address the high cost of living, he would facilitate availability and affordability of fertiliser and good quality seeds.

Owino said that to actualise the President's directive, the subsidised fertiliser programme will start with counties undertaking planting during the October-November-December short rain season.

"The government has availed Sh3.55 billion to subsidise 1.42 million bags of 50kg bags of fertiliser. The quantity will support cultivation of approximately 1.4 million acres," the PS said.

The last time the government offered subsidised fertiliser through the e-voucher system, individual farmers were only allowed to buy 20 bags of fertiliser.

On April 4, Agriculture Cabinet Secretary Peter Munya directed the NCPB to allow growers access to up to 20 bags of subsidised fertiliser.

He said capping had been increased to 20 bags from 10 bags of 50kg.

Munya said this would cushion farmers from high fertiliser prices and help increase productivity and incomes.

He said only registered farmers would benefit from the Sh5.7 billion fertiliser subsidy programme.

On April 1, Munya said the government would offer a subsidy for 2.9 million bags of 50kg fertiliser to farmers.

Munya had attributed the rise in fertiliser prices to producer countries such as China, Russia and Turkey restricting exports to protect their farmers.

He said the Russia-Ukraine crisis caused further disruptions in the global fertiliser industry, which has also affected domestic prices.

Munya said the NCPB will sell the fertilisers at agreed subsidised prices to stabilise the prices.

First batch of cheaper fertiliser to arrive from Morocco next week

President Ruto in his poll pledges had promised to bring down the cost from the current Sh6,500
News
2 months ago

Urges for perseverance says new administration can no longer continue paying the subsidy as its coffers were near empty
Counties
2 months ago
Post a comment
WATCH: The latest videos from the Star
by AGATHA NGOTHO Science Writer
News
20 September 2022 - 23:00
Read The E-Paper