They wore identical beige overalls, caps and boots to the campaign venue at Kasarani stadium.

• They were dressed in beige overalls fitted with the Kenyan flag on the left hand side and a label bearing their names. 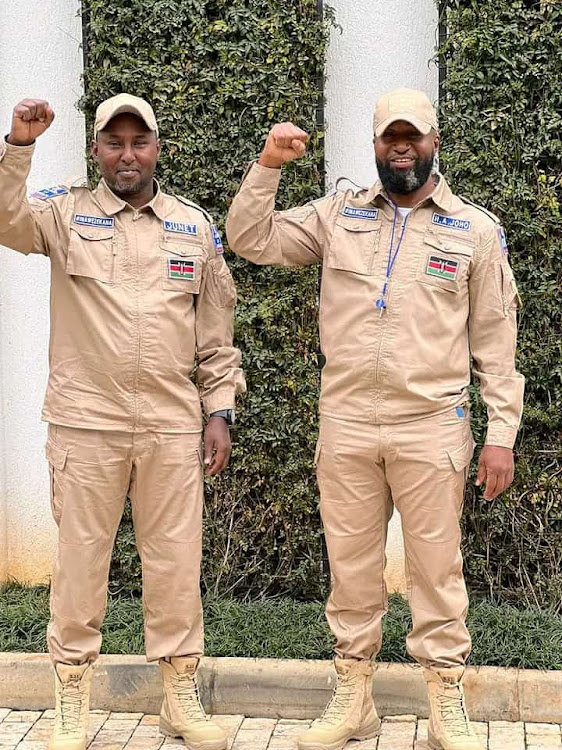 They were dressed in beige overalls fitted with the Kenyan flag on the left hand side and a label bearing their names.

The two had come under fire this week after DPP Noordin Haji asked Inspector General of Police Hillary Mutyambai to investigate them over a doctored video published on their Twitter handles.

The video published on Tuesday was manipulated to show that Deputy President William Ruto was profiling certain ethnic communities residing in Rift Valley and declaring shame on them.

The DPP said the probe will also look into an audio clip that was alleged to be a recorded phone call between Junet and an IEBC commissioner.

Haji said the probe should be conducted swiftly as the impugned materials could sow seeds of discord.

Joho who has finished his second term as Mombasa Governor will serve as the CS for Land if Raila Odinga wins the presidential elections.

Junet on the other hand is defending his seat back in Suna.

They are to make their final pitch to woo voters ahead of Tuesday's election.
News
1 week ago

Why Kenyans should vote for Raila - Bishop Nduati

He said Raila and Martha are leaders of reputable history and stand on issues affecting the country.
News
1 week ago
WATCH: The latest videos from the Star

DPP says it should be conducted swiftly as impugned materials could sow seeds of discord.
News
1 week ago

The MP is heard allegedly setting up a meeting with IEBC officials.
News
1 week ago
by MAUREEN KINYANJUI News Reporter
Realtime Updates
06 August 2022 - 15:24