The governor's remarks were not directed at President William Ruto.

•Her statement has been edited to appear that she was responding to Ruto yet that is not the case. 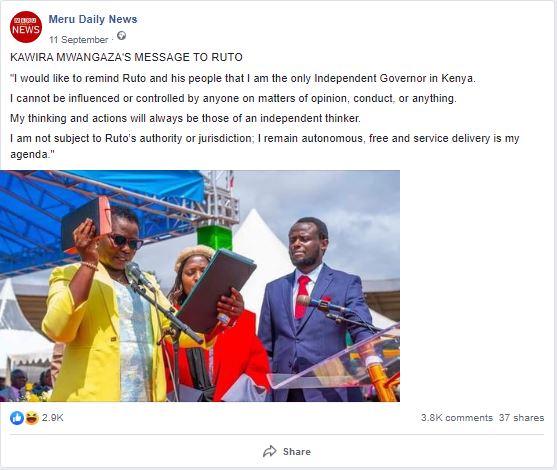 A social media post by Meru Daily News indicating that Meru Governor Kawira Mwangaza fired a response to President William Ruto after she missed a church function graced by the Head of State in her county is MISLEADING.

The news page in a message dubbed “KAWIRA MWANGAZA'S MESSAGE TO RUTO”  stated:

"I would like to remind Ruto and his people that I am the only Independent Governor in Kenya. I cannot be influenced or controlled by anyone on matters of opinion, conduct, or anything.  My thinking and actions will always be those of an independent thinker. I am not subject to Ruto’s authority or jurisdiction;  I remain autonomous, free and service delivery is my agenda."

When contacted by the fact-checker to clarify the source of the claims, Meru Daily News referred this writer to a Facebook post by Kawira Mwangaza which she made on Sunday, September 11.

“Definition of independent. adjective. not influenced or controlled by others in matters of opinion, conduct, etc.; thinking or acting for oneself: an independent thinker. not subject to another's authority or jurisdiction; autonomous; free: Service Delivery My Agenda.  #merumustbehappy

"The only Independent Female Governor in Kenya.”

From the post, it is clear that the Governor made no reference to President Ruto.

Her statement has been edited to appear that she was responding to Ruto yet that is not the case.

Kawira had pledged to work with the Ruto-led administration and her absence raised eyebrows on whether she had reneged on the promise.

FALSE: Governor Lenku has not been elected CoG chair

Election of CoG chair will be held on Saturday.
News
2 weeks ago

The Judiciary of Kenya has termed the news as fake.
News
2 weeks ago
Post a comment
WATCH: The latest videos from the Star
by FRANCIS MUREITHI Digital Editor
Fact Checker
19 September 2022 - 16:44
Read The E-Paper