•Some influential leaders also bought into the fake news and went on to share their condolences.

•Fact-checker has however debunked the reports and can authoritatively say they are fake. 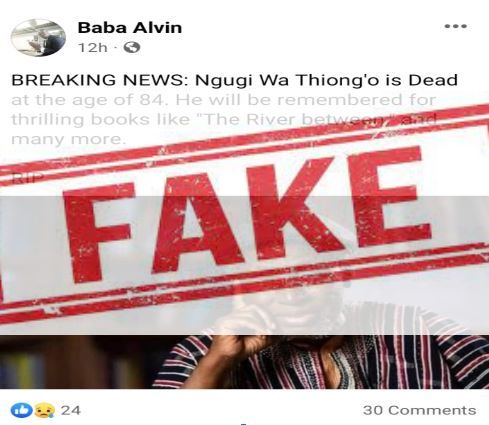 Reports on social media indicating that Ngugi wa Thiong’o is dead are FALSE.

The reports started emerging on Monday evening and a section of Kenyans posted on their timelines while others shared the misleading posts.

Some influential leaders also bought into the fake news and went on to share their condolences.

Fact-checker has however debunked the reports and can authoritatively say they are fake.

Ngugi’s children dismissed the reports on Monday and said their father was alive.

“Not again with the death rumours! Baba @NgugiWaThiongo_ is here - talking to him as I write this. To be sure, death is inevitable for all of us - but there is no need to invite it sooner,” he tweeted.

Ngugi’s daughter Wanjiku also weighed in on the reports and tweeted: “It is just another rumour!  All is well!”

Ngũgĩ wa Thiong'o is a Kenyan, Kikuyu writer and academician. He writes primarily in Gikuyu and formerly wrote in English.

The Star Newspaper has looked into a Facebook post claiming that Ngugi wa Thiong’o is dead and finds it to be FALSE.

PDF copy of The Star claiming Chebukati was bribed fake

FALSE: A snake did not interrupt Raila's Kasarani rally

The image shared of a snake was taken in 2014 and not on Saturday, August 6.
News
3 months ago
Post a comment
WATCH: The latest videos from the Star
by FRANCIS MUREITHI Digital Editor
Fact Checker
16 August 2022 - 15:26
Read The E-Paper